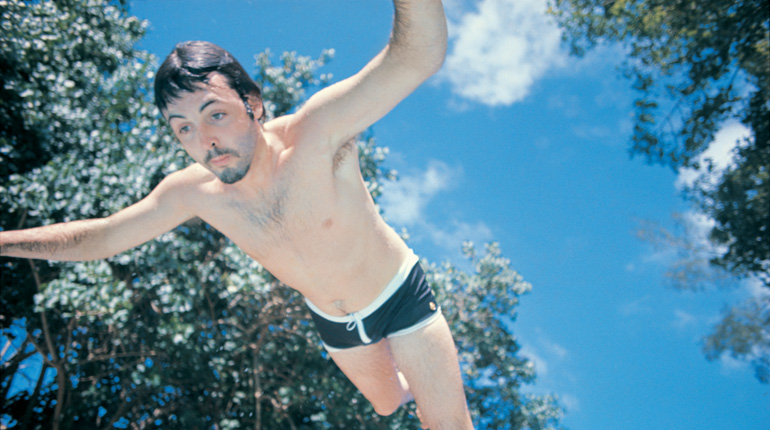 In 1966, no rx during a brief stint as a receptionist for Town and Country magazine, Linda Eastman snagged a press pass to a very exclusive promotional event for the Rolling Stones aboard a yacht on the Hudson River; her fresh, candid photographs of the band were far superior to the formal shots made by the band’s official photographer, and she was instantly on the way to making a name for herself as a top rock ’n’ roll photographer. In May 1968, with her portrait of Eric Clapton, she entered the record books as the first female photographer to have her work featured on the cover of Rolling Stone. During her tenure as the leading photographer of the late 1960s musical scene, she captured many of rock’s most important musicians on film, including Aretha Franklin, Jimi Hendrix, Bob Dylan, Janis Joplin, Simon & Garfunkel, The Who, The Doors and the Grateful Dead. In 1967, Eastman went to London to document the “Swinging Sixties,” where she met Paul McCartney at the Bag ’O Nails club and subsequently photographed The Beatles during a launch event for the “Sgt. Pepper’s Lonely Hearts Club Band” album. Paul and Linda fell in love, and were married on March 12, 1969. For the next three decades, until her untimely death, she devoted herself to her family, vegetarianism, animal rights and photography.

From her early rock ’n’ roll portraits, through the final years of The Beatles, via touring with Wings to raising four children with Paul, Linda captured her whole world on film. Her shots range from spontaneous family pictures to studio sessions with Stevie Wonder and Michael Jackson, as well as artists Willem de Kooning and Gilbert and George. Always unassuming and fresh, her work displays warmth and a feeling for the precise moment that captures the essence of any subject. Whether photographing her children, celebrities, animals, or a fleeting moment of everyday life, she did so without pretension or artifice.

This retrospective volume — selected from her archive of over 200,000 images — is produced in close collaboration with Paul McCartney and their children. Included are forewords by Paul, Stella and Mary McCartney. As such, it is a moving personal journal and a lasting testament to Linda’s talent.

Look represents over 150 artists with more than 400 color plates. The book represents many years of close research by its author who is recognized for her work in this field, and for several earlier publications including “The Darkroom: Photography and the Theatre of Desire” published by Macmillan in 2003. A series of scholarly essays accompany the extraordinary array of reproductions, which bring to the viewer what must be one of the most comprehensive collections of Australian photographic art ever compiled. With the ever-expanding inclusion of photography and photographic components within the most exciting current trends in contemporary art, this major publication will be essential reading for those who wish to grasp the essence of art now. It also demonstrates the contribution of technologies in the area of photography and related arts. The transformation of possibilities has been rapid and a vital component of the diversity that characterizes current art-making.

A collection of photographs by renowned American photographer Jack Parsons, whose deep passion for the New Mexico landscape is revealed in the stunning vistas and everyday scenes he captures on film. From images of small towns and lonely plains, mountains, rivers, fiestas and murals to old adobe houses, crumbling walls and dirt roads in Santa Fe, Taos and elsewhere, Parson’s photographs present a very personal, elegiac vision of the state where he has made his home since the 1970s. These photographs reveal a deep understanding and reverence for a place whose complex, rich history, unique multiculturalism, and unparalleled beauty continue to captivate residents and tourists alike. Parsons is an experienced cinematographer and director; however, he is most famous for his elegant book photography that captures the visual heritage of the American Southwest. In recognition of his contributions, he was honored in 2006 with the New Mexico Governor’s Award for Excellence and Achievement in the Arts. He lives in Santa Fe.

AFTERWARDS: CONTEMPORARY PHOTOGRAPHY CONFRONTING THE PAST

A powerful and thought-provoking international survey, this book presents the work of a select group of leading photographers whose concern is not to depict violence, disaster and suffering directly, but to examine its aftermath. Each body of work is displayed as self-contained sequences of photographs, with each sequence preceded by a brief artist’s statement about the work shown. Timeless, meditative yet psychologically intense, and including essays by a leading group of academics on how our emotional response to images functions, this book shows the possibility for contemporary photography to question what happens and continues to happen in our world, its potential to connect us emotionally with our fellow humans and for it to provide us with an opportunity, in time, to begin to understand and find answers. Covers 60 years of modern history, including the aftermath of 9/11, Hurricane Katrina, the Srebrenica massacre in Bosnia, and the fate of people in the midst of cataclysmic events or long-term upheavals, such as refugees, political prisoners and survivors.