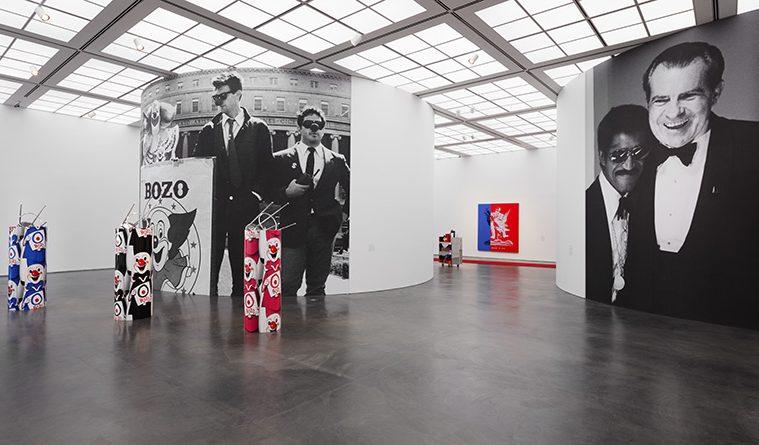 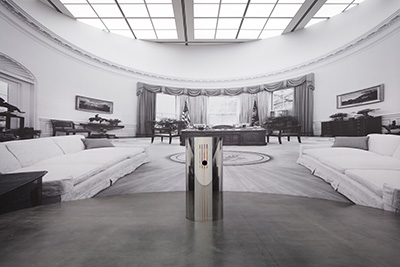 As you approach the President’s desk in the Oval Office, a reflective chrome cylinder sits in the middle of the room between two white couches. There’s a hole cut in the center of the cylinder; bend at the waist and you’ll be eye level with it. If you peer into the dark hole and let your eyes adjust, you’ll find you’re looking down the barrel of a gun.

This is Lethal Weapon, just one of the works by Kathryn Andrews in the exhibit Kathryn Andrews: Run for President at the Nasher Sculpture Center in Dallas on view September 10 to January 8. Andrews likes elements of surprise, shrouding her sometimes-shocking subject matter within shiny cylinders that provide the viewer with only a glimpse of what’s inside, and Lethal Weapon is no exception. It uses the gun from the eponymous motion picture, now safely housed inside this sculpture and set in front of a black-and-white photomural of the President’s office.

Film props, reflective surfaces, and familiar icons like Sammy Davis, Jr., Richard Nixon, Spider Man, and Bozo the Clown are hallmarks of Andrews’s show, which explores themes of fame, celebrity, and image-making. Andrews was asked to present a cross-section of her work over five years for the exhibit, which originated at Chicago’s Museum of Contemporary Art, and she imagined her work within in the context of the presidency—the ultimate symbol of power during this election year.

The backdrop for another of Andrews’s whimsical sculptures: a large-scale photo mural of Nancy Reagan sitting on Mr. T’s lap (of The A-Team) as he plays Santa Claus at the White House. In front of the mural sits a stainless-steel cart that Andrews had fabricated. Three shelves hold an assortment of brightly wrapped gifts, playing off the image of Mr. T as Santa. Yet the gift boxes are dented, the paper creased, edges fraying and the color flaking off. The shopworn look is intentional—a facet of their many years of use as props in the film and TV industries. 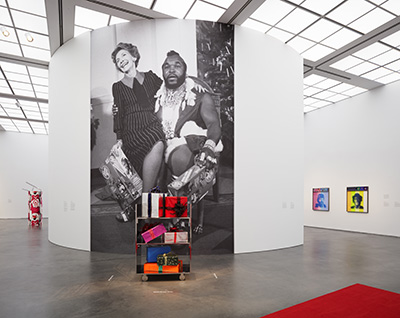 “The presents aren’t really imbued with much meaning aside from the associations that we individually tie to presents—joy, surprise, the celebration of a birthday or Christmas. But they’re empty, and they’ve also been used over and over again. They embody the idea of ‘nothing is as it seems,’” says Leigh Arnold, assistant curator at the Nasher.

Interestingly, Andrews rents props for many of her pieces instead of making them, and collectors (like the one in Belgium for this work) have the ultimate decision of whether or not to keep renewing the leases on the props once the terms have expired.

Making work that relies on indefinite leases is cumbersome but the choice is intentional. “She’s interested in found objects and how those objects are imbued with meaning—especially with a film prop—then twisting those meanings or putting them with something that changes the meaning because of the context,” Arnold explains.

Sammy Davis Jr. and President Nixon pose together for a photo in another large-scale mural that belies layers of meaning. Historically, Davis, Jr. endorsed Nixon for President, which helped Nixon connect with black voters. The entertainer was also invited by Nixon to stay over at the White House—the first African-American to do so. And as a 7-year old, Davis, Jr. starred in Rufus Jones for President, his first film role. The 1933 film is a dream sequence of Davis, Jr. believing he became President, and then waking up and realizing it was just a dream.

The portrait signifies the accessing of political influence through the gateway of celebrity, and represents all the dreams that failed to be realized: barriers to entering politics for black Americans and Nixon’s disgraced presidency. Furthermore, all of this is in direct contrast to the exhibit’s setting—it was conceived in Chicago, the hometown of a black senator who rose to become President. 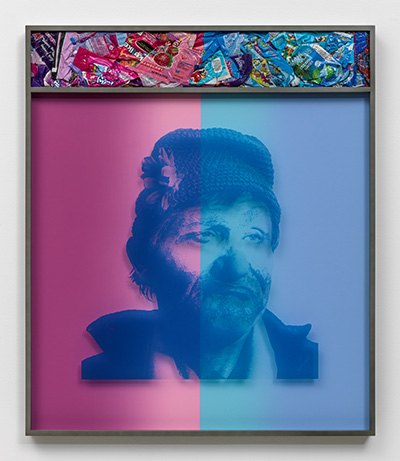 “She pairs images that are so iconic with images that seemingly have little to no connection, and she does this in a way to draw not only what viewers take from these images (what these objects mean to each other and how they relate to the viewer), but also to tease out some unknown connections,” says Arnold.

The exhibition progresses along the path to and through the Presidency, starting with a candidate’s rise on the campaign trail, tracking a president’s tenure, and ending with the relinquishment of power either by disgrace (as with Nixon) or assassination. The fact that the show closes with Lethal Weapon in Dallas is also noteworthy because of the city’s infamous association with the assassination of John F. Kennedy.

“It’s a weird, strange coincidence that the show closes in Dallas,” says Arnold. “There are all sorts of interesting things at play with the exhibition.”