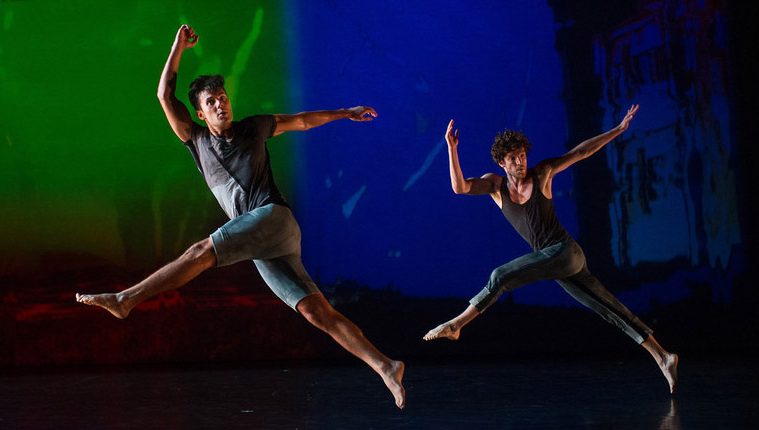 Liz Gerring Dance Company in she dreams in code

A Juillard trained dancer, Gerring launched her company in 1998 with a four-hour movement installation. It’s to the word “installation”that I want to draw your attention.  Although this piece happens with the context of a theater, there is a sense of a full surround to it.

Precision is present in all dance forms. Our eyes are used to seeing precision in very structured, linear movement. In Gerring’s world, you see a level of exactitude in natural gestures, and in the simplest of movement, such as a prance or leap. When she employs unison movement, this quality becomes even clearer. It’s startling to watch in this context, and an innovative use of virtuosity.

Moving on to physicality, in looking at  the larger canon of her work, I’m intrigued by her approach to crafting dances. I found myself pulled in by the degree of differentiation that the choreographer calls on from her dancers. There’s a naturalness present, lending an immediacy or directness, a familiarity with the world, from the way an object hurls through the room, or an animal catapults through the air. These are qualities we know and understand from our own embodied experience as human beings.

These so-called everyday movements feel specially charged under Gerring’s hand. Pay attention to the way she uses torso generated movement. Sweeping full-bodied gestures lend a lushness, as the dancers dive full force through space. She draws outside of the lines of ballet, modern and post modern vocabulary.

Then, there’s the sheer volume of Gerring’s physical language, creating such extreme velocity that there’s a super human energy to some sections of the dance. Movement is rarely guarded, yet control comes into play to add nuance rather than restriction. I was trying to watch a video of the piece, which kept stopping and starting, and in the process caught a dancer mid lurch, revealing the anatomy of her use of propulsion. Gerring’s performers are superior dancer/athletes, as the stamina required to perform this piece is downright impressive.

I want to bring in the emotional tone of the piece. In a video interview for Dance Enthusiast, Gerring mentioned that the source of the piece is one single relationship. The emotional underpinnings of Gerring’s work go underground as she dilates an experience through movement, sound and video.

Gerring’s partnering also has a unique character to it. Most often, partnering is governed by a high level of effort. Here, we see more of a sense of push and pull, modulating momentum, precarious balances and configurations that ask us to question how they accomplished these seemingly daring lifts and holds.

The dancers themselves are tied to the work’s athleticism as their own idiosyncrasies are an integral part of Gerring’s creative process. She will often visualize one particular dancer doing a specific phrase, so there’s a strong link between what you see and the dancer. This may seem obvious, but really, it’s not. Often choreographers come with with phrases that are then fit on to the bodies in front of them. Here, Gerring utilizes a different imaginative process, sourcing the talents of her dancers at an early stage of development, merging form and body.

She writes, “Each dancer compels me differently.  It is always a goal of mine to bring out the best in the dancer physically as well as encouraging them to express much of themselves through the movement.” This intimacy with her dancers’ traits lends texture and dimension.

Although I’m not inclined to say Gerring’s work is heavily tied to one lineage, I do think her work is in conversation with a maverick like Trisha Brown, who used flow to great effect.   Merce Cunningham feels relevant here as well, as both Gerring and Cunningham use exacting gestures to carve up the stage space. And certainly the blending of video elements and sonic environments is a hallmark of some modern and post modern dance.

But listen to how Alastair Macaulay of the New York Times addresses Gerring’s influences in her 2010 work Lichtung/Clearing, drawing attention to her originality.  “You watch Lichtung/Clearing much as you do Cunningham’s  RainForest (1968): a drama where the feral, the primitive and the civilized all interconnect. Steps keep dissolving into through-the-body gestures, and every part of the physique is given a fresh inflection. There are other choreographers from whom Ms. Gerring has learned, notably Trisha Brown.” Macaulay named  Lichtung/Clearing as one of the best dances of 2010.

Susan Yung sees a glimpse of Trisha Brown too. She writes in Dance Magazine, “Independent phrases move across the stage, ebbing and flowing inexorably like lapping waves. There were nods to influential choreographers such as Trisha Brown: Several segments involved dancers leaning on one another, evoking Brown’s 1970 Leaning Duets.”

Critics almost always mention an influence with a degree of trepidation, and later on down on the page, there is usually a mention of her unique stamp. Here’s Macaulay right after mentioning Brown and Cunningham, “But Ms. Gerring seems unencumbered by any such debts. Her immediacy is her own.”

Her process may be revealing of that fact.

Most dancers come highly schooled in various traditions, and Gerring is no different in that capacity. She did, however, undergo an unlearning process to get to her personal language, discovering her own kinetic signature.

Gerring writes. “Working for years alone in the studio to determine what movements were unique to me, what my body does differently from others – this was the beginning.”

Structure is re-defined as it should be in the piece called she dreams in code. There’s a satisfying way phrases begin, end, and are interrupted, as if to layer and nest one structure into another. It gives our eye a lot to engage with, and a splintering of our attention.

Her use of stage space is also significant. While I was watching her work, when you lose something you can’t replace on DVD, I zipped through it again in fast forward, watching for the patterns of stage usage. It’s as if the dancers use every space on stage available to them, in unpredictable ways.

Gerring casts a wide net when it comes to collaborators. For Litchtung/Clearing, she worked with video artist Ursula, for Montauk, it was Italian visual artist Vittoria  For this piece, she worked  with composer and longtime collaborator Michael J. Schumacher. Together, they founded the non-profit TonalMotion, Inc, dedicated to the intersection of sound and movement art.

Creating a solid sound environment to house her work is key to her process. Gerring creates the dance separate from the score. She might use rock music as a starting place. Once the dance is created, she brings the composer into the picture. She prefers computer based sound scores with few recognizable instruments. The autonomy of the choreography stays intact. So even though there is no matching of sound to step, there’s still a potent relationship.

Her approach allows a kind of spatial expansion, where music and dance co-exist, provide support without overwhelming the overall experience. There is no one way sound and music interact, rather, it’s a multifaceted relationship.

At times, Schumacker’s score is in counterpoint to what’s happening on stage, creating an ambient tension, at other times sound and movement are more in sync. Clearly, her phrases have their own dynamic. I think of her use of sound as coloring the air around the dance, giving it breathing room.

Gerring enlists video as yet another layered element, but again with a sense of restraint. Canadian media  artist Willy Le Maitre added the video layer. Le Maitre, who originally trained as a painter, provides continuously shifting imagery, that isn’t just a backdrop, but another moving part. Recognizable scenes of water, structures and trees oscillate with more opaque and abstract images, mirroring the tension in the dance. The play between what moves on stage and on screen makes for yet another volatile dynamic. Carolyn Wong’s lighting design amplifies the piece’s punch, especially in the opening moments, where it’s as if dance ignites with an “on” switch.

Again, Gerring carefully mixes her elements, with a less is more approach. There’s a sense that each element has its function in contributing to the whole, but never steals the limelight from the movement, which is so central to Gerring’s matrix. Video, sound and movement are each in their own orbit, yet there are moments when they all align, creating both a kinetic and visual anchor.

She dreams in code dwells in  paradox. The piece has been described as simultaneously simple and complex, or as the New Yorker raves, “opulent and restrained.” It’s this tension of opposites that keeps us engaged.

The dancers are highly trained, yet able to to dial it down to a superb naturalness, so we see a balance between control and freedom.  They are completely different kinds of movers yet are able to move from the same intention.

Video and an electronic score add density without distraction. Structure is present, yet perturbed just enough to keep us unsettled. The work is rooted in abstraction, yet whispers its emotional tone. It’s a list of impossibles really. And that’s the very thing that keeps our eye glued to the stage.

I’m going to give Gerring the last word. She elegantly poses the question, “How does one derive meaning from abstraction? My intent is an emotional one and the end result should reflect that. This has been my challenge, trying to extract the feeling behind the steps and gestures. I believe this is the only way that my art can have value.”