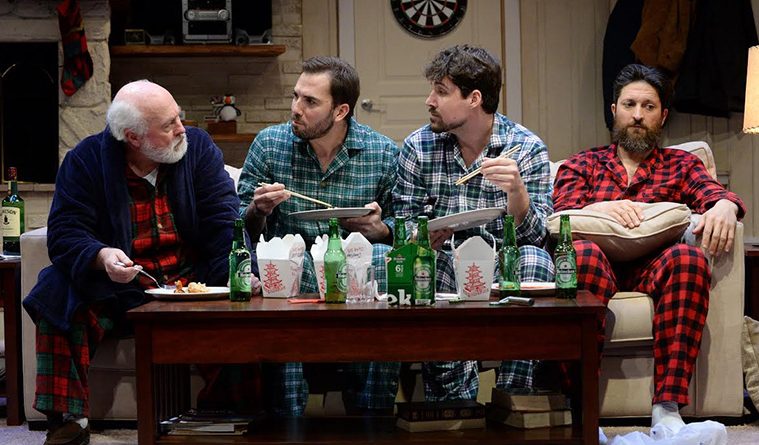 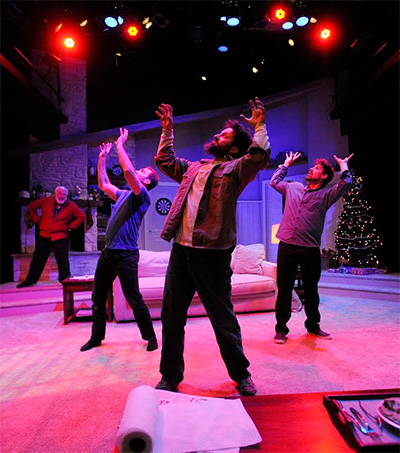 Four straight, white men walk into a rumpus room somewhere in suburban America. This isn’t the beginning of a dumb joke but the setting and most of the plot of Young Jean Lee’s Straight White Men, through March 6, making its regional debut at Stages Repertory Theatre.

Technically it’s more of a family room, but the four men will indeed spend most of the 90-minute play making a commotion and disturbance as they reveal the truth of their lives. But whether that big rumpus is just general straight white men’s anxiety of losing position in society or a kind of attention-must-be-paid tragedy of the common man, Lee seems to intentionally leave for us to decide.

The play begins with man number one, Drew (Jason Duga), tormenting, through song, a video-game-playing straight white man number two, Jake (David Matranga). It soon becomes apparent that this is not one bro antagonizing another, but two brothers with a lifetime of love and childhood tortures visited upon each other.

We soon learn the juvenile-behaving Jake and Drew are actually the two successful brothers who have returned to the family home to spend Christmas with their widowed father, Ed (James Belcher) and eldest brother, Matt (Adam Noble). Growing up, Matt was the most brilliant of the three, but now lives with Dad and works a temp job for a charity nonprofit.

There’s little plot here. The brothers roughhouse and engage in a series of remember-whens for most of the first half of the play. Only when they sit down on the couch together for a pre-Christmas, Chinese dinner, do we get more than hints that something is wrong, either psychological or perhaps even spiritually, with Matt as he breaks down sobbing over their take out. The core of the drama is the seemingly simple mystery of what’s troubling Matt. Is he feeling some great despair or just a bit of adult early onset ennui? 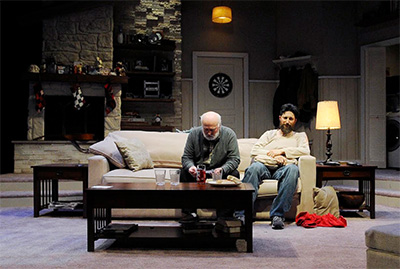 Dad blames his son’s troubles on student debt. Drew thinks Matt doesn’t feel himself worthy of happiness. Jake believes his older brother is attempting some great noble act of straight white manhood by doing quiet good while getting out of the way of women and minorities so they can succeed. Both men seem to be projecting their own issues onto Matt.

Together, and guided by director Leslie Swackhamer, the cast gives this ordinary but lost family an integrity and sympathy, even–in the case of Matranga and Duga–when their characters are being total assholes. Belcher, who has played some very intense and even scary roles in many a Houston theater, makes Ed a mellow dad with hints of great depth. Noble has the toughest duty, and he does good work conveying Matt’s own bewilderment as to why he’s so unhappy.

The actors also have to create together perhaps the most interesting character, the one who is never onstage, the boys’ dead mother. Through them we get a glimpses of a strong, liberal woman, who made sure her sons were lovingly taught to see their own unearned privilege the world gave them by happenstance of birth. So do all the brothers’ problems boil down to mommy issues? Probably not, unless American culture in general is the indulgent mommy. 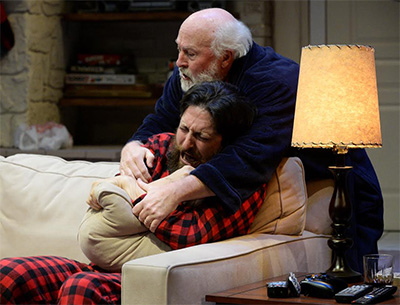 A bit of thematic experimentation within the play is the neither white nor straight character, Stagehand-in-Charge (Stoo Gogo). While the men never break the fourth wall to acknowledge this person who keeps their show running smoothly, Stagehand orders the audience to turn off those cell phones, directs the lights, then waits in the wings and comes on between scenes to clean up the family’s literal messes.

Playwright Young Jean Lee is obviously less interested in plot and more in her characters and all the issues tied up in the play’s self-aware title. In this age of identity politics, can an Asian-American woman (and with this production an assured female director) tell some white men’s story?

Straight White Men is not a light, fun night at the theater, though the break in talk for a straight white men dubstep dance off is certainly a sight to behold. There’s no definitive message here, and Lee leaves the audience in a limbo similar to Matt’s. How we think he should proceed, or even if we care at all, might depend on our own identity permutations and that ultimate theatrical privilege, that of audience judging characters.