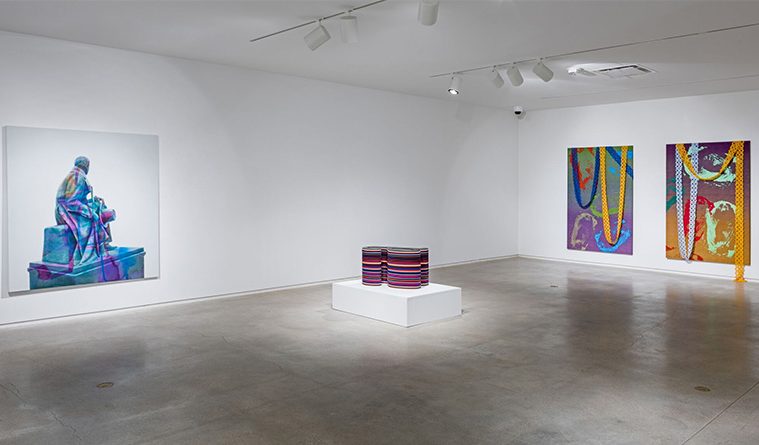 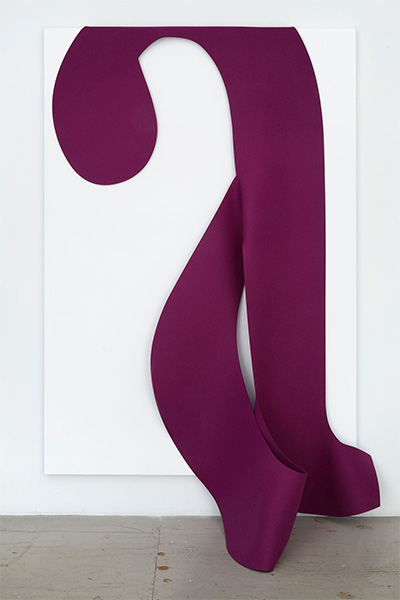 Blake Rayne’s Cabin of the Accused, on view at Blaffer Art Museum through March 18, 2017,  is a survey of works that “rearticulate specific elements, organizational attitudes, and pictorial procedures” in the artist’s oeuvre. Like many Blaffer exhibitions of late, it seems to focus on experimental, sometimes ephemeral artworks…objects that might act as a proposal for what art could be if we loosen our commercial strictures a little bit. If this is the Blaffer Museum’s goal, it’s a laudable one. We should see works that are more layered, more difficult, and less commercial in an academic setting. And what better to juice the brains of the upcoming MFA and BFA students than work that falls into this category?  Unfortunately, Cabin of the Accused doesn’t take this mission far enough. The fruits of Rayne’s labors are on view, but his process is only half-revealed, leaving the viewer on the outside of what ought to be a process of collaborative discovery.

A curatorial statement describes Rayne’s work as “putting to test contemporary beliefs regarding painting,” and yet the majority of the paintings in this show are highly traditional, with softly layered glazes or misty geometry.  A painting that appears to be the rear view of a statue is carefully glazed in pastel tones. The color lies atop the image, but like graffiti, appears unrelated to the figure. Untitled mimics the romantic potential of Caspar David Friedrich’s famous Wanderer above the Sea of Fog, in which all the drama takes place behind an anonymous portraiture subject. But where Friedrich places the figure against an untamed and dramatic landscape, Rayne’s faceless figure gazes into a flat white void, a nihilistic gesture made by a figure with no real agency to begin with.

Other wall works include a series of white canvases with colossal, heavy felt letter ‘a’s’ draped from canvas to floor. The floppy typography acts as a bridge between the two and three dimensional pieces in the show, creating a sense of continuity that is lacking within the paintings themselves. Indeed, the sculptural elements of Cabin are by far the most intriguing ‘proposals’ Rayne makes. 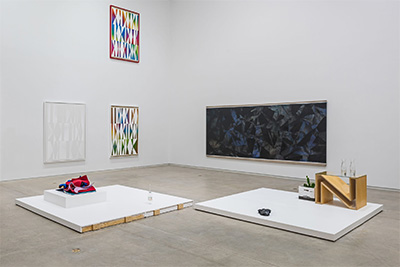 Rayne’s clear interest in slamming together elements of highly refined, classical artmaking techniques with the “stuff” from everyday life is his most interesting and joyfully pursued tactic. This cheekiness is most evident in Yogurt Cinema from 2013, a small, flickering projection of wobbly line drawings angled at a block of cheese near the floor. The tiny projector, an empty yogurt container, and the cheese sit upon a razor sharp pedestal of precisely laminated cardboard sheets and cast concrete. This and a dangling sculpture of t-shirts on hangers, laser cut text, and bicycle segments are almost Rauschenberg-ian in their simultaneous reverence and disdain for the traditional materials of art.

The work in Cabin is largely untitled, with Rayne relying instead on material descriptions to provide context. And yet the map for Cabin is nearly incomprehensible, a preparatory mistake that lends heavily to the sense that we aren’t really invited into the conversation. The wall text for the exhibition is so academic as to seem like a purposeful obfuscation. “The conditions of cultural production are modified through the implementation of forms of flexible self-managerial labor.”  I’m no populist, but this is not the stuff that inspires artistic empathy. 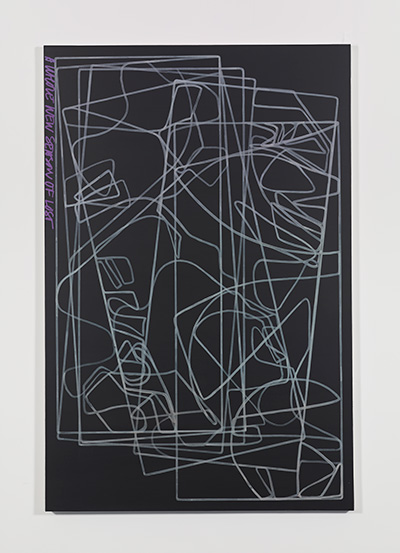 This show suffers by comparison. I’d like to feel the same visceral joy, investigation, and tension that comes through in Analia Saban’s eponymous exhibition. This artist, whose work occupies the Blaffer’s upper floor, does much more to “put to test” beliefs and techniques regarding painting, to the extent that the work is described as “surveying the murder scene of art history.”  While “murder scene” seems needlessly hyperbolic as a descriptor, Saban’s expansive repertoire of techniques, most of which begin in the familiar painter’s realm of the rectangular or square canvas, and end with wild deformations of these same materials, could certainly be seen as forensic evidence.  And Saban invites us to elbow and needle and stretch against these conventions even further by labeling them as “gags” in her titles.

Cabin of the Accused politely hints at an exploration of painterly conventions, where Saban warps and bends those conventions without ever totally leaving them behind. It could be interesting to see this as a question of spectrum, with Rayne as the academic and Saban as the materialist.  And this is because Rayne simply hasn’t left the viewer enough crumbs to follow his lead. Cabin of the Accused feels like a potentially interesting puzzle that is missing pieces.