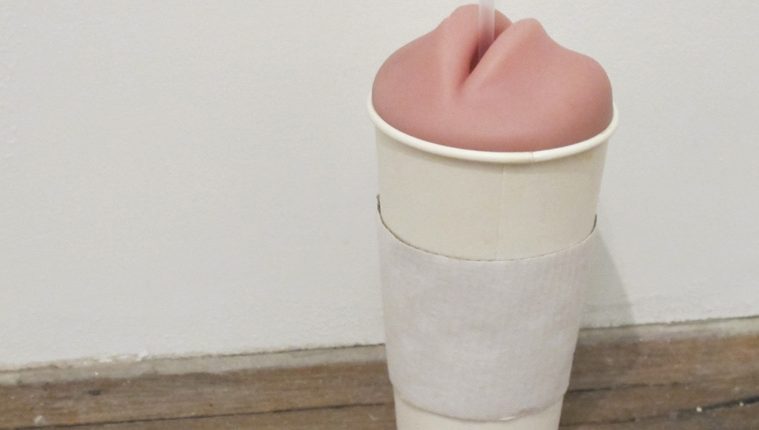 Marking the 99th anniversary of Marcel Duchamp’s first readymade sculpture – a bicycle wheel mounted on a painted stool – the Contemporary Art Museum Houston’s It Is What It Is. Or Is It? takes a look at how today’s artists are continuing to eke mileage out of what he called “a form of denying the possibility of defining art.”

Mounted by CAMH’s new curator, Dean Daderko, just seven months after his arrival, the exhibition makes a great first impression, having been beautifully installed in CAMH’s cavernous Brown Foundation Gallery. On closer inspection, as is often true of thematic group shows, it sometimes casts too wide a net in trying to update the readymade while leaving out works by artists whose engagement with the form is clearer and more compelling.

That said, it’s a fun show to argue with, not least because Daderko is right about the stakes: The readymade and its legacies “demand that we be active viewers,” and undertaking the “conceptual effort to consider what we can and what we can’t see” can teach us something “about a contemporary state of being.”

The show’s standout is self-described “ready-made artist” Claire Fontaine, a Paris-based collective who lifted “her” name from a popular French brand of school notebooks. In Untitled (Prière de Toucher), a disposable coffee cup is used to contain a readymade masturbator for men – the kind popularized by brands such as Fleshlight. The collective has placed a straw between its “lips,” which would normally accommodate the body part used to activate the sex toy.

It’s a poignantly hilarious, decidedly contemporary sight: an emerging icon of store-bought sexual self-sufficiency at once contained and penetrated by incompatible disposable products. (The coffee cup is designed for hot drinks; the straw, for cold ones.) The piece wryly embodies the idea that, as Claire Fontaine once told artist and critic John Kelsey, “consumption is no longer an activity in itself, it coincides with the unfolding of our lives, it is not a choice or a pleasure.”

CAMH probably hopes viewers won’t comply with the title’s request, which is French for “please touch,”  especially given its ambiguity: Are visitors being invited to touch themselves, the artwork, or both? And when an artist’s instructions to viewers contradict those of the hosting institution, whose authority should prevail?

Claire Fontaine’s other contribution raises the stakes on the latter question. Titled Instructions for the sharing of private property (2006), it’s a 45-minute compilation of YouTube videos that demonstrate how to pick locks. While it won’t likely lead to a CAMH break-in, Daderko’s placement of the video by the front door is apt: Kunsthalles, after all, are socially acceptable means of sharing other people’s private property – often inflating its value in the process.

Also touching on the relationship between appropriation and theft is William Cordova’s labertinos (pa’ octavio paz y gaspar yanga), a mazelike structure consisting of 200 vinyl records the Peruvian-born Cordova stole from an undisclosed Ivy League university. The thefts, we’re told, were “in response to that institution’s refusal to return 200 Inca artifacts from Peru after it originally borrowed them in 1914,” though Cordova remains the lone Peruvian beneficiary of his tactic, which at any rate spares the offending institution from public scrutiny.

And for sheer pretentiousness, it’s hard to beat the title’s reference to Gaspar Yanga, who in 1617 became the governor of the first free settlement for Africans in the Americas after leading a decades-long series of slave rebellions. Does Cordova really mean to suggest some kind of equivalency between his tame gesture and Yanga’s heroics? (If so, that idea seems to have occurred to him only recently; previous presentations of the piece have used the same title minus the Yanga mention.)

Its conceptual shortcomings notwithstanding, labertinos, like works by Latifa Echakhch and Fayçal Baghriche, represents a globalization of the readymade coupled with a more politicized perspective than Duchamp brought to the form. For many artists, cultural baggage is itself a readymade.  Frame (2010) by Echakhch, a Moroccan-born French artist, wrings the most complexity out of simplicity. It’s a prayer rug she unraveled one strand at a time, leaving nothing but the frame and upsetting the presumed boundary between sacred and unholy ground while reinforcing contemporary viewers’ tendency to associate minimalist compositions with spirituality.

Jamie Isenstein’s Smoking Pipe (2006) stands out among sculptural works that combine found objects in performative or autobiographical ways. On a wooden table sits a dead ringer of the pipe pictured in René Magritte’s painting The Treachery of Images (which bears the message “Ceci n’est pas une pipe,” or “This is not a pipe”).  At first glance, it might appear static, but soon a humidifier hidden beneath the table begins spewing steam “smoke rings” through the pipe’s chamber, as if to say “This is not a pipe either” – even though it’s right there, in the flesh.

Combining performance with documentation, Czech artist Jiří Kovanda is represented by seven black-and-white photos with text documenting simple actions he performed for the camera in 1976, such as sitting by the phone waiting for someone to call. Daderko says the simplicity and universality of Kovanda’s gestures – haven’t we all sat waiting by the phone, at least before mobile devices came along? – qualify them as readymades.

This seems to stretch the meaning of the term past the breaking point – unnecessarily so, since other Kovanda actions, such as building and photographing a small, quasi-minimalist tower of sugar cubes at the foot of a wall in a Prague neighborhood in 1978, combine the use of readymades with the same sweetness and ephemerality Daderko admires in the photos on view here.

Even more far-fetched is the inclusion of two highly realistic, extremely detailed Ellen Altfest paintings – one of cacti in the woods and another of a detail of a male leg. This might make sense if Altfest worked from found photos instead of live observation or depicted common objects instead of plants and human body parts, but since she did neither, it’s hard to imagine what representational painting wouldn’t qualify as a readymade in Daderko’s view.

Rachel Hecker’s terrific airbrushed Jesus portraits, on the other hand, derive from both the readymade form of his iconic image with found images of celebrities such as Pink Floyd’s David Gilmour and Lord of the Rings star Viggo Mortensen. I would love to have seen them joined by some very different Hecker works – her extraordinary large-scale paintings of Post-it notes, appointment cards, and other seemingly worthless scraps of readymade ephemera – complete with the notes she had scribbled to herself, giving them an often moving diaristic quality.

And the show’s omission of abstract painters is curious, considering how many of them have used commercial paints as readymades. Think of Frank Stella’s stated desire “to keep the paint as good as it was in the can,” or Houston artist Joseph Cohen’s exclusive reliance on reclaimed “oops” paints that have been returned to home-improvement stores to make his abstractions.

All of which is to say that you should take Daderko up on his challenge to be an active viewer. Doing so won’t leave you agreeing with all his choices, but it might leave you rethinking the readymade and its ubiquity in contemporary art. Not to mention a newfound knack for picking locks.