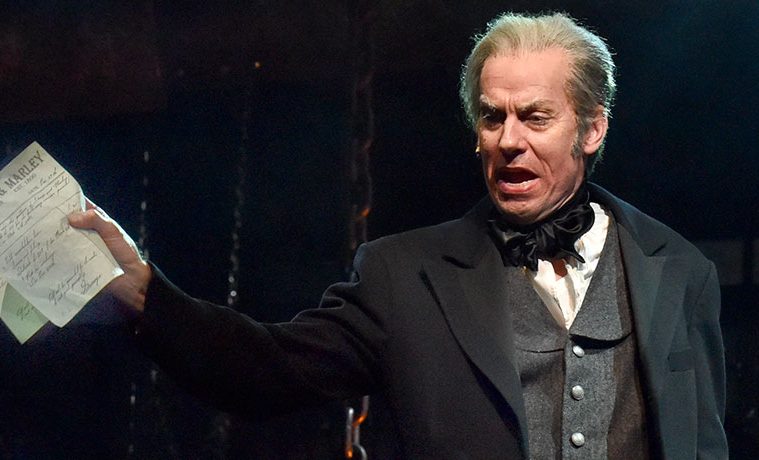 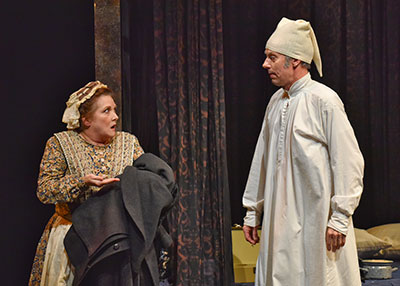 Dallas Theater Center delivers a sparkling holiday gift in this year’s staging of the holiday classic, A Christmas Carol.   Always a crowd pleaser, this year’s annual production, through Dec. 27, is tied up with pretty voices, slick casting and intimate moments that tug on the heartstrings and give the family show a hauntingly beautiful sheen.

DTC Artistic Director Kevin Moriarty, who brings new life into the aged story of redemption and forgiveness, has adapted the traditional Charles Dickens story of Ebenezer Scrooge. A man with a heart of stone, Scrooge is no one’s friend, and he likes it that way. But when a trio of ghosts visit him on Christmas Eve and show him the reverberations of his loathsome ways, he has a change of heart, mind and soul as he sets off to redeem himself with society.

Reprising his role as the mean miser, Chamblee Ferguson is almost larger than life in a slightly exaggerated performance that nonetheless is nuanced and a joy to witness. Scrooge is the symbol of the wealthy and aristocratic members of society, who are ignorant of the misfortunes of the poor, and unforgiving of the lower classes. As portrayed by Ferguson, his transformation from cold and nasty to warm and loving will melt your heart. More than a few sniffles were heard in the audience on opening night when Scrooge redeems himself to a pair of charity workers collecting holiday funds for the needy. 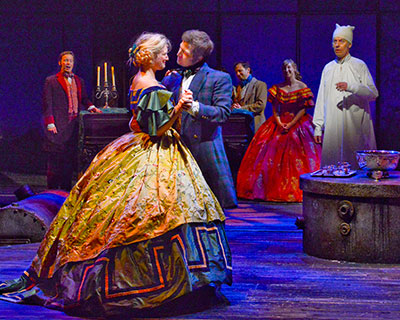 First-time director Lee Trull keeps the story briskly moving forward with music and dance. A magical highlight comes from Sabina Zuniga Varela as Ghost of Christmas Past. A woman usually plays the angelic spirit, but Dickens makes no mention of the Ghost’s relationship, if any, to Scrooge. In the DTC version, the Ghost is Scrooge’s long deceased mother, who’s heart is broken seeing how her son such a bitter man. Varela’s soft features and velvety voice bring a heavenly quality to the role.

Flying even higher, literally, nine-year-old Salma Salinas charmed the crowd as she “flew” over the Wyly Theatre stage as the Ghost of Christmas Present. Her eyes big and smile wide, the young actress gave her entire performance fifteen feet above stage, singing and speaking her part as she was hoisted about, often resting on top of scenery or being lowered into empty audience seats before flying again across Scenic Designer Beowulf Boritt’s vast dank and sooty warehouse set. It may not look cheerful and bright, but as the story tells us, the brightness of life can shine in even the darkest places. 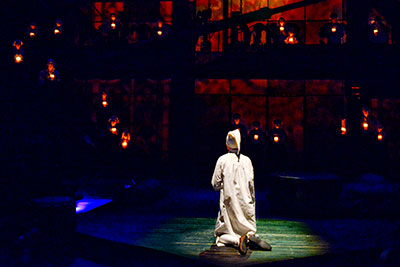 Dickens popularized the expression “Merry Christmas,” which is the most enduring expression of the holiday season. And he created a vision of Christmastime based on joy, compassion and companionship, which has become the blueprint of Christmas celebrations in western culture.

In this DTC production, Scrooge’s story of redemption remains as powerful and uplifting as it ever was. But beyond the morality lesson, the show is simply a pleasurable entertainment, sprinkled with familiar holiday tunes and toe-tapping dance numbers. Regardless of your mood entering the theater, A Christmas Carol will put you in a holiday spirit faster than a red-nosed reindeer can land on your rooftop.