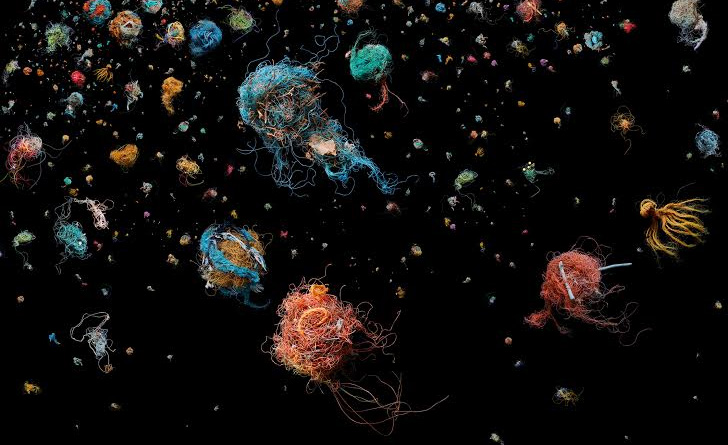 Mandy Barker, SOUP: Bird’s Nest, 2011.
Ingredients; discarded fishing line that have formed nest-like balls due to tidal and oceanic movement. Additives; other debris collected in its path.
Courtesy of the artist. 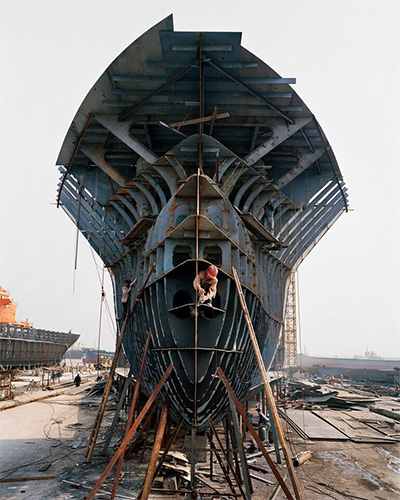 Steven Evans steps carefully around the boxes of photographs that line the FotoFest office walls. Stopping, he peers into the stacks of framed prints, lifting them up so we can look more closely. Mandy Barker’s images of debris collected from the ocean look like strange, low-budget galaxies, with bottles, plastic balls, bits of twine, and discarded soccer balls forming constellations on their black backdrops. We agree that they look like alternative universes, both beautiful and haunting. Evans walks to another bin and pulls out prints by Roberto Fernández Ibáñez, in which the artist takes graphs from The Wall Street Journal, Bloomberg, and other news sources and reduces the information to abstract geographies made from photochemical emulsions. The painterly surfaces of the works suggest the rise and fall of valleys, the peaks of mountains. Evans pauses. “He’s an alchemist, I think,” he says, as he gently replaces a print in the box.

FotoFest is back this month for its 16th iteration, Changing Circumstances: The Future of the Planet, March 12 – April 24, with an epic calendar of exhibitions, programs, lectures, films, and performances. Featuring work by 34 artists from nine countries, this biennial is the first in ten years to consider a theme that is not tied to a specific geographic region. It’s a timely choice for an election year, and a relevant conversation for Houston, given the city’s energy-driven economy. “Some of the work is about energy, some is about climate change, biodiversity, human migration, or activism,” says Evans. “What I think we’ve confirmed, which we knew instinctively going into it, (is that) it’s all interconnected. Everything you do has an impact and it impacts much, much more widely than you can imagine.”

Executive Director of FotoFest since 2014, Evans co-curated this year’s biennial with FotoFest co-founders Wendy Watriss and Fred Baldwin. “They’re very inspiring and really driven,” he observes. “I’ve learned so much from them. We’ve been in the trenches together, and we’ve laughed together. … I’ve rarely met anyone who works as hard as they do. Actually, I don’t think I ever have.” 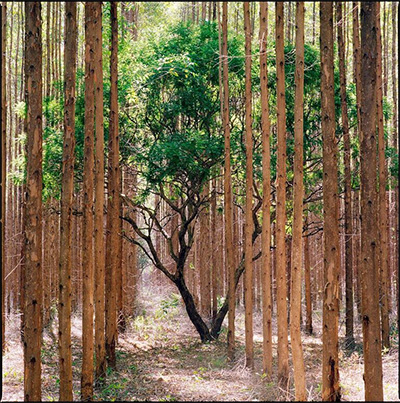 Watriss and Baldwin have led biennials with environmental themes in the past. In 1994, the biennial’s theme was The Global Environment. 2004 saw Water: Celebrating Water. Looking at the Global Crisis, and in 2006 the team curated a biennial titled The Earth. But environmental issues have also featured prominently in many of the other biennials. In 2010, for example, the exhibitions included works about light pollution, logging, industrial development, and water conservation, all in the U.S.

Many of the works in this year’s biennial record various manifestations of human impact on the planet. These atmospheric, geologic, hydrologic, and biospheric changes wrought by humans—which some scientists have dubbed the Anthropocene—suggest important questions for the energy industry. Houston, then, is an important site for cultivating these conversations, and exploring solutions. “The fossil fuel economy that emerged over the last 150 years is what we are ‘paying for’ now,” Watriss says. “You can’t ignore it. On the one hand, it liberated human society; on the other hand, it has created tremendous damage and on a scale never seen before. But ultimately it’s about larger issues that go beyond energy itself. It’s about more than oil. It is about changing one’s vision about the world and what role we play within that vision. If we don’t develop new ways of understanding the world, we are likely to perish. … Oil and the energy corporations emerge from a collectively accepted vision of how humankind can and does live in this world. We have created imbalances that can destroy much of the natural world and its interconnections.” 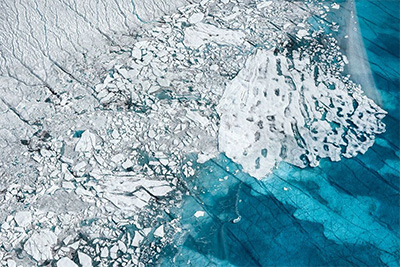 One of the biennial exhibitions will be a 30-year review of work by Canadian photographer Edward Burtynsky. “(Burtynsky) started out intending to photograph the beauty and majesty of landscape, somewhat the way Carleton Watkins did,” Watriss says, “He liked Watkins’s work very much and used him as a formalist reference. But he soon realized that what Watkins had been photographing, what and why were no longer relevant to the realities of the late 20th century. Burtynsky’s land was no longer a frontier. It had already been trampled on and often despoiled and disfigured. It’s the positive/negative, ying and yang of industry and industrialized societies. Their legacy and imprint on the land is generally very disfiguring. After photographing mining, oil, China (manufacturing), Burtynsky became very involved with what is happening to the Earth everywhere and the scale of what is happening. I think he is a different artist today than when he started work in the late 1970s and early 1980s.”

Three of the artists in this year’s biennial have worked for National Geographic. David Liittschwager, Joel Sartore, and David Doubilet have been documenting ecosystems, animal species, and living reefs, in sustained explorations of global biodiversity.

“In regard to the environment, many photographers are still working in the testimonial mode, building evidence about what is happening to the natural world as a result of the human presence,” Watriss says. “When I was thinking about this theme at first, I was thinking of work that would take directions that differed from documentation. There are many artists who are making very conceptual works, but a lot of the work is related to visual testimony. However, I have come to think that now, at this point in time, we still need visual evidence. It is the evidence of what we do as human societies, the kind of economic systems we have developed.” 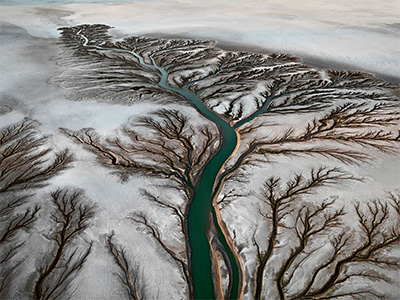 This is the first time since 2005 that FotoFest has invited submissions of work for its central biennial exhibitions, and their curatorial team received more than 500 entries from around the world. As a result, the biennial includes numerous new voices, from a wide range of photographic practices. “We were wondering if we could be surprised,” Evans says, “and we were. I think we’ve encouraged an unorthodox situation, where different kinds of artists are talking to each other.”

Alongside the documentary photographers, this year’s biennial exhibitions include many photographers who take conceptual approaches to the subject. Works such as Ingo Gunther’s installation of illuminated globes, Amy Balkin’s take-away poster about the atmosphere, Ibañez Fernández’s meditative reinterpretations of graphs and charts, Texas photographer Dornith Doherty’s lenticular prints of seeds from seed banks, Luis Delgado-Qualtrough’s artist book that satirizes the social history of carbon, and Vik Muniz’s portraits of garbage pickers from Rio de Janeiro’s Jardim Gramacho (the world’s largest landfill) use a miscellany of strategies—including irony, humor, language, and pedagogy—to inform their work.

Evans shows me Brazilian photographer Pedro David’s work. David captures the relationships between native and non-native species of trees planted in the Cerrado, the tropical savanna that spans central Brazil. International steel companies have planted non-native eucalyptus trees there because they are a fast-growing source of wood that can be used in the process of making coal. As the trees grow, surrounded by native vegetation and local forests, they appear to be imprisoned and suffocating. And, at the same time, they drain the area of important resources that sustain local vegetation and animal life. The balance is precarious.

“There are very important topics here, and there’s also beauty here.” Evans says. “We’re interested in artists educating us, sharing their thinking, and showing us what’s going on.”

FotoFest describes itself as a biennial of photography and mixed media arts, and among other multidisciplinary offerings, this year’s event includes two new, music-based collaborations. Da Camera’s production of The Colorado: A Film Oratorio, a multidisciplinary film performance with live music and chorus that explores water, land, and life in the Colorado River Basin, was co-commissioned by FotoFest. In addition, composer Marcus Maroney will present a new composition of ekphrastic music inspired by the exhibition of Burtynsky’s work, in collaboration with contemporary classical music ensemble Musiqa. The composition will be performed in the gallery, alongside the photographs.

This year also marks FotoFest’s first collaboration with Marfa Dialogues. Founded in 2010, the Dialogues are a series of symposia about art, politics, and culture, and have covered topics ranging from the U.S./Mexico border to climate change. These talks, which will take place at the Menil, CAMH, and the MFAH, look to the creative community for large-scale problem-solving. 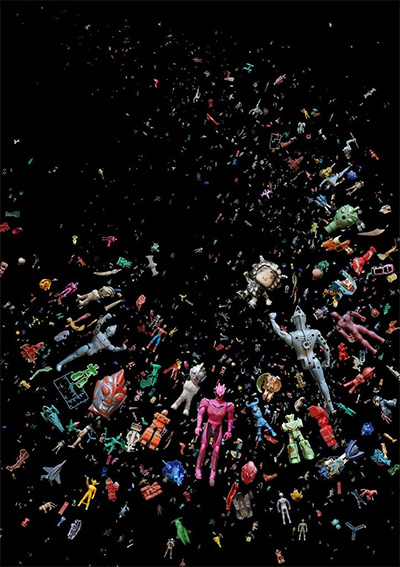 “I think this FotoFest is working to provoke and inspire—to get people to think about seeing the world and nature in new ways, including their own relationship to the earth,” Watriss says. “This we hope will happen not only because of the quality of the visual images, but also because of what the artists themselves are saying about their own experiences with Nature and how they view themselves and their work in relation to Nature. … The essays in the festival book by a public health expert (Geof Rayner) and a biodiversity scholar (Thomas Lovejoy) not only outline the problems of the Earth and the Anthropocene but talk about ways to confront these challenges. It is about a new mindset, a mindset that looks to future change in the structure of our economy. The voices of the artists are calling for responsibility and engagement. Maybe they will be examples for others.”

With other events at MATCH and in collaboration with Rice University, FotoFest’s expansive reach will cover most of the city. Related exhibitions and programs will be happening at CAMH, the Menil, the MFAH, and at 115 participating spaces in the Houston area.