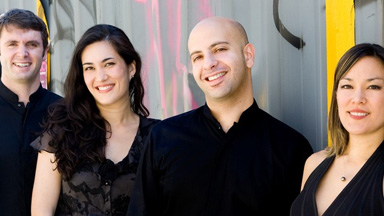 Long known for its inventive and contextualized programs, Da Camera Houston did what it does best with its recent presentation of “Debussy’s Paris.” “Lisle Joyeuse,” the Debussy favorite for solo piano was paired with the Sonata for Violin and Piano allowing for a brilliant contrast of style and mood. The former is awash with the familiar and happy blend of the then new exotic and the ancient, and the later, the last substantial work of a man who’s body was ravished with cancer and who’s country was ravished by World War I, lingers in a bittersweet melancholic dream-like state. As one would expect, violinist Cho-Liang Lin and pianist Anne-Marie McDermott gave brilliant and engaging readings of both works.

Notable throughout both of these works was the signature sound of the Enso String Quartet. Now a long-time Houston favorite, this ensemble ages like a fine wine. Their playing is as refined, elegant and crisp as ever and they moved easily between the other world that is conjured in the Edgar Alan Poe inspired “Conte fantastique” and the more stately style of late 19th century France, which is exemplified in the “Concerto.” With a magical blend between the Enso and Cho-Liang Lin, contrasted with the brilliant and articulate sound of pianist Anne-Marie McDermott, the Chausson provided the performance highlight of the night.