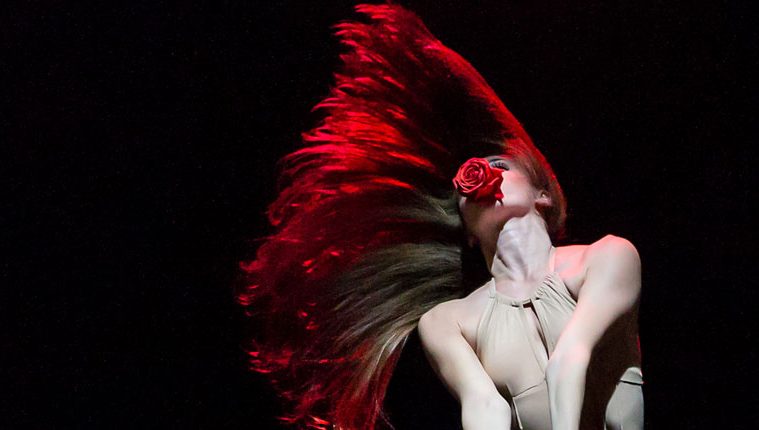 It has taken me 25 years to get to Ballet Austin. Although I’ve toured their stunning building, located in the heart of Austin’s bustling warehouse district, this was my first time seeing the company. Just about everything about the experience felt fresh, from the slick-yet-welcoming video that opened the show (I didn’t know Ballet Austin has a piece with Trenton Doyle Hancock), to the youngish crowd (some of the best shoe gawking I’ve done in years) to the minimalist contours of the Long Center Theater itself.

Now let’s get to the dancing. A spirited performance of Balanchine’s Allegro Brillante launched the evening. The company moved into their element with Annabelle Lopez Ochoa’s Requiem for a Rose and artistic director Stephen Mills’  The Rite of Spring.

Ochoa’s Requiem featured an ensemble of 12 dancers.  A 13th dancer, the marvelous Elise Pekarek, dressed in white with a red rose in her mouth, led us into the action. Ochoa’s movement is non-stop: No posing or static shapes here. Her work is in a continual state of unfolding, much like a rose in a continual state of bloom. The flow-factor envelops us as the ballet tumbles forth in cascading, sweeping gestures.

Tatyana van Walsum costumed both the men and women in crimson, red- petalled, rose-like skirts, lending an androgynous quality, which allowed a perspective of romantic love as an energy, rather than a specific narrative. The leggy Pekarek assumed the role of the dynamic center of the ballet, motivating her swirling minions into a delicious frenzy.

Ballet Austin In Stephen Mills’ The Rite of Spring.
Photo by Tony Spielberg.

As we move into the centennial year of Stravinsky’s iconic score, many choreographers are trying their hand at their own version of The Rite of Spring, adding to the numerous ballets already in existence. With suspended bare trees dangling precariously over the dancers, Mills’ ballet packs a visual punch. The trees create a potent remind of the natural world’s power over us, in addition to amplifying the ballet’s minimalist tone.

Ballet Austin In Stephen Mills’ The Rite of Spring.
Photo by Tony Spielberg.

Mills used pounding second position stomps, tight circle formations and a competitive force between the men and the women to tell this familiar ritual to a dazzling effect. No Rite of Spring is complete without a sacrifice, and here the duty fell to the stunning Michelle Thompson, whose bloodied form pierced the whiteness.