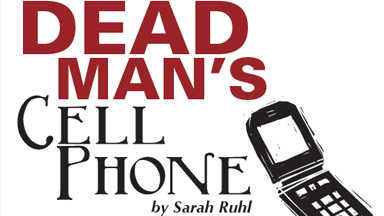 Within the first five minutes of Mildred’s Umbrella Theatre Company’s recent production “Dead Man’s Cell Phone” you understand that the place you are about to encounter is not your own. This is a bizarro parallel to the world you know. The play takes you through the curious adventure of Jean, viagra 100mg who has happened upon the relentless ringing of a dead man’s mobile phone.

Director Rob Kimbro approaches the text with a sparseness. The rotating set pieces are minimal and the lighting unembellished, cialis which places all emphasis on the actors and their actions. Mildred’s Artistic Director, Jennifer Decker, plays Jean with a quiet peculiarity. She moves through the world of the play with little trepidation. Nothing about the strange way in which she has encountered this cell phone, the odd family it has brought her to or the fact that the damn phone will not stop ringing, feels anything other than normal. She has a steady calm of someone that is either incredibly average or a potential sociopath. Several of the characters describe her as comforting; the dead man’s mother going as far as to compare her to a “casserole,” the ultimate comfort food.

Jean finds herself consoling several characters; among them is the dead man’s mistress, portrayed by the seductive and superbly funny Candyce Price. Price finds the perfect characterization of a 1950s femme fatale, and she steals every scene she is in, which there were not nearly enough of. The other scene-stealer is that of the dead man, who is brought to life exceptionally by Mark Roberts. In the retelling of the day of his death, Roberts is commanding, arrogant and self-centered; paradoxically the man who died is the most unsympathetic character of the bunch.

All of the acting worked rather well. The absurdity of the plot and the writing gave the actors plenty of room for a mixture of raw emotion and straight-faced deadpan. The big ideas of the play, communication, human connection, religion and the ties that bind all of these things together could have been made stronger through the direction, though. There were several moments that just missed their intended mark. A choreographed piece of white-masked cell phone talkers starts out creepy and effective, but goes on for too long to become a mockery of itself. Overall, the excellent acting and mirfine writing of author Sarah Ruhl are the highlights of this production.

— ABBY KOENIG
Abby Koenig is a Mass Communications professor, a creative writer and a playwright. She is regular contributor to the Houston Press’ Art Attack blog. www. blogs.houstonpress.com/artattack