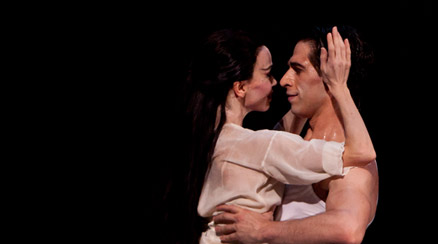 Amy Fote commands the stage as Cio-Cio San in Houston Ballet’s season opener, Madame Butterfly. With Fote’s imminent retirement later this fall, the radiant principal is cherishing every last arabesque, as demonstrated in her masterful performance. There is a completeness present, as if each corner of the choreography has been thought through and considered.

Stanton Welch’s signature story ballet gives Fote plenty of opportunities to do exactly what audiences have grown to admire about this remarkable dancer, and she doesn’t miss a beat with her flawless performance. It was hard to tell if the sobs coming from the audience were for Cio-Cio San’s tragedy or the fact that this was their last time seeing Fote in this role. This is going to be a painful farewell.

James Gotesky’s earthy Pinkerton emphasized the hard side of his character. Jessica Collado provided the right combination of pathos and restraint as Suzuki, while Joseph Walsh made for a surprisingly good villain, Goro.

As the most spare of Welch’s story ballets, Butterfly soars from a combination of revealing choreography, Puccini’s lush score and Peter Farmer’s elegant set design, which comes complete with a gigantic set of sweeping wings.

Fote wasn’t the only one dancing with a renewed authority. Connor Walsh seems to be growing into his skills, judging from his stellar performance in Welch’s minimalist ballet, Clear. Alternating between crisp attack and lyrical splendor, Connor was on his game big time, pushing his razor-sharp technique into the service of Welch’s tricky dynamics. Joseph Walsh and Charles-Louis Yoshiyama followed in Connor’s wake with strong performances. The elegant Mireille Hassenboehler softened the edges of Welch’s seven-man powerhouse ballet. The season is off to a polished start.