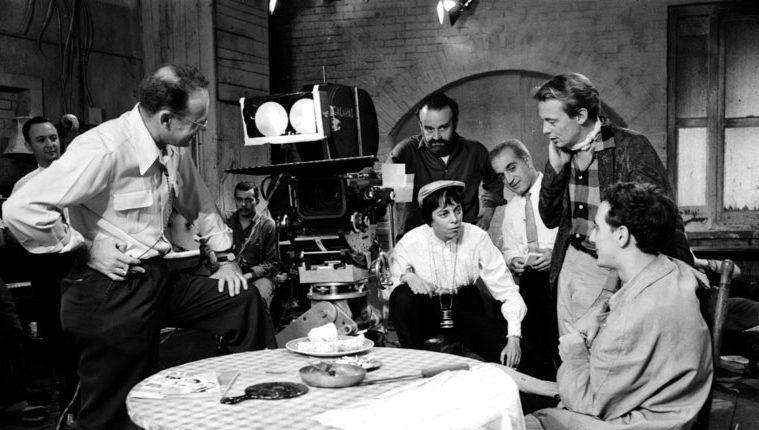 Shirley Clarke and the actors the set of The Connection.
Photo courtesy of THE CONNECTION.

Film festivals are overwhelming. I always think I’m going to pick the good ones, but doesn’t always work out that way. This year, for the Houston Cinema Arts Festival  (HCAF), I took a few chances. Here are the highlights.

In an effort dubbed “Project Shirley,” Milestone Films  — headed by husband and wife team Dennis Doros and Amy Heller  — has set out to restore and distribute Shirley Clarke’s feature films and shorts. Clarke was an experimental, incredibly original filmmaker who influenced a generation of filmmakers, but somehow didn’t find her way into fame in the male-dominated avant garde canon.

Shirley Clarke’s The Connection, adapted from Jack Gelber’s controversial 1959 stage play, is a funny, tragic, and strange film. A group of heroin addicts wait anxiously in a cramped loft for their dealer to show up and deliver their fix. To pass the time they play jazz, sleep, moan, philosophize, and play more jazz. A fictional director nudges and prods the dope-sick anti-heroes, cajoling them into telling us what being a dope fiend is all about. The self-awareness never ventures into the territory of trickery or annoyance, while still poking fun at the occasionally exploitative nature of documentary investigations.

While the characters may be tragically hip, the film never becomes too hip for itself. The pace and distance is carefully controlled. Nothing feels accidental. Arthur Ornitz’s camera work is dynamic, sharp, and deliberate.

One my issues with so-called “beat” narratives is that they try to imitate bebop as a naïve, relentless high without acknowledging the low that follows; hence the critique of  typing without writing. In The Connection, Clarke slows down, allowing moments of tragedy to break through the cool, affected airs, revealing the sorrow and loneliness of addiction.

“Antonio And Maurilio” – The center Antonio Frasca and Maurilio Giaffreda.
Photo courtesy of CAESAR MUST DIE.

Clarke’s Ornette Coleman: Made in America is a touching portrait of one of the most influential and prolific jazz musicians of all time. Coleman is up there when it comes to eccentrics, and Clarke’s portrait of him does his strange genius justice. Clarke combines archival interviews, concert footage, fictional reenactments, and 1980s FX into a unique journey into the life and mind of her subject. I thought I knew a lot about Ornette Coleman, but watching the movie, I realized how little I knew.

Clarke’s documents the intimate relationship Ornette and his son, Denardo, as Ornette encourages Denardo’s growth as a musician, human being and later, as his manager. Coleman seems so completely at home in the camera’s gaze, always grinning, speaking from his heart as he describes his successes, his failures, his hopes for himself, his family, and the human race. He really can’t help but be so completely himself, it’s a joy to watch.

Caesar Must Die, directed by Paolo Taviani and Vittorio Taviani, chronicles a production of Shakespeare’s Julius Caesar set in an Italian prison. During the auditions and casting decisions, the film feels like a documentary about the prisoners, but it quickly transforms into a filmed version of the play. As they start to learn their lines, dramatic music is cued in the background and the camera takes on a dramatic flair. Fragments of the play go on in the hallways, in their cell-blocks, with and without direction from the play’s director, and with scripted or not-so-scripted squabbles between the actors.
The prison, with its empty concrete rooms bordered by wire and iron, looks like a better set than you could find on any professional theater stage. Some of the documentary interaction struck me as forced or scripted, but it’s easily forgiven: It’s about their experience as actors, and the lines between prisoner and actor should be blurry. Between the auditions and the final performance of the show, some of the prisoners undergo surprising transformations as actors, finding meaning through their art and a profound joy in the bleak landscape of incarceration.

-JOSEPH WOZNY
Joseph Wozny is a writer and musician living in Houston.