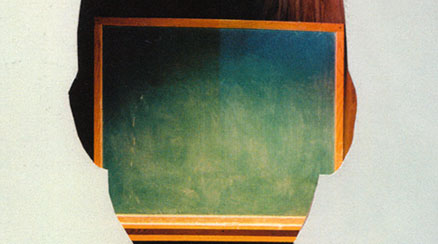 Review: In Appropriation at HCP

In Appropriation at the Houston Center for Photography is one of the strongest exhibitions currently showing in the city. Curated by SeeSaw Magazine founder and editor Aaron Schuman, it includes the work of seven artists who incorporate appropriation methodologies into their practices.

Figuring largely in academic discourse during the late 80s and 90s, discussions regarding the practice of appropriation have seemingly fallen by the wayside, and in choosing to frame the exhibition within this context Schulman runs the risk of having his curatorial endeavor written off as postmodernism redux. However, the dynamism contained within each artist’s deployment of the appropriative gesture ensures that the exhibition avoids the pitfalls of cliché.

Michael Wolf contributes a series of diptychs that feature a painted reproduction of a well-known artwork paired with a portrait of the copy artist holding the reproduction. Wolf has arranged the photographs so that the composition underscores formal elements of the original work. The resulting images are exercises in self-referentiality that cleverly allude to the entanglement of painting and photography with the history of art, as well as issues of parody, originality and the division between high and low art.

Adam Bromberg and Oliver Chanarin’s collaborative works raise issues of ethics as related to the appropriative act. Their series Afterlife (2009) is a reinterpretation of a photograph documenting the execution of 11 Kurdish prisoners by firing squad. Broomberg and Chanarin have deconstructed the original image by separating the figures of the individuals and placing their forms onto separate glass plates. Placed horizontally along a shelf, their linear presentation prolongs the moment of the depicted execution and simultaneously furthers our engagement with that moment, hopefully leading us to consider the implications of viewing such events.

Their other work in the exhibition, People in Trouble Laughing Pushed to the Ground (Dots) (2010), features images drawn from the Belfast Exposed Archive, a collection containing over 14,000 black-and-white contact sheets that document the Troubles in Northern Ireland.  When images were selected they had either a red, yellow or blue dot placed upon them, resulting in a partially obscured image. Bloomberg and Chanarin have re-produced a selection of these images using a circular template, which references the inadvertent censoring caused by the dots and reveals (until recently) hidden imagery.

Esther Teichman and Melinda Gibson each employ collage into their respective works. Teichman’s Mythologies features arrangements of images drawn from photographic, film and painted sources that come together in romantic, poetic musings that respond to notions of desire, despair and longing. Gibson’s The Photograph as Contemporary Art draws its imagery from the Charlotte Cotton’s eponymous text, which is regarded as a definitive work on the genre.

Gibson creates her pieces by selecting three images from the text (usually of an interior setting, a landscape and some form of portraiture) and overlaps them after excising portions of the selected pictures. The resulting collages create new contexts for both the original works themselves and Gibson’s work to be read while exploring notions of originality and reproduction.

Seba Kurtis’s Shoebox is a highly personal and unique response to the curatorial premise. The work consists of a box of family photographs that were his family’s sole possession after they were forced to leave Argentina as undocumented migrants following the economic crisis and political turmoil that plagued the country during the late seventies and early eighties. The photographs were damaged by a flood while in storage at his grandmother’s house.

Kurtis has elected to frame and hang the works in an arrangement that mimics the manner in which family photographs are displayed in living room parlors. The pristine aesthetic of the white frames contrasts with the damaged backs and surfaces of the photographs yet also serves to highlight the installations’ minimalism, delicacy and beauty while begging the question of whether or not it is accurate to frame the work as appropriation when the work in question is in the artist’s own possession.

–SALLY FRATER
A Museum of Fine Arts, Houston Core Critic in Residence, Sally Frater’s exhibition “There is no archive in which nothing gets lost” is on view through November 25 at the Glassell School of Art.