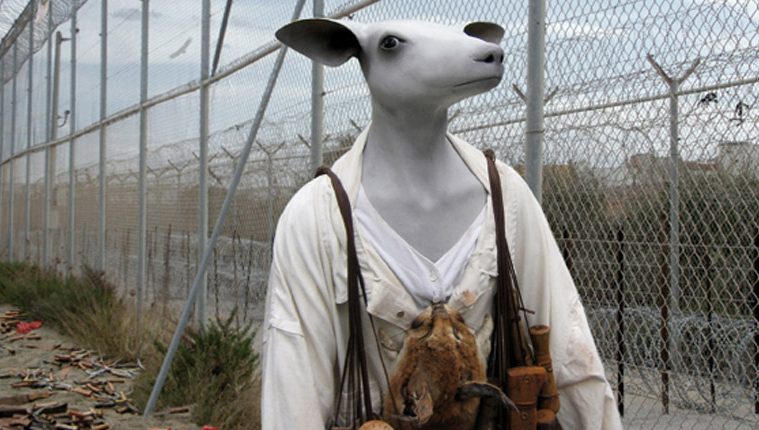 Jane Alexander’s motley cast of characters alternately attracts and repels. Her figurative sculptures of near life-size human-animal hybrids are simultaneously grotesque and sympathetic, quietly aggressive and compellingly beautiful. They are also altogether human in their interactions.

Throughout the main gallery of the Contemporary Arts Museum Houston, Alexander has choreographed at least four discrete tableaux, populated by her hyperrealistic fiberglass and plaster sculptures. Over the course of fifteen years Alexander has cultivated a number of human-animal hybrids – with such names as corporal, custodian, harbinger, and ghost.

They emerge here in different scenes and social interactions; that is to say in groupings that depart from the traveling show’s earlier presentations. As with any social gathering, the venue dictates certain dynamics, but in Alexander’s hermetic world, the creatures’ social mutability riffs on the conceit of formal permutations. (Guest curated by Pep Subirós, the show was organized by the Museum for African Art.)

Upon entering the space, Security (2006-09) immediately confronts the viewer – a prison-quality, razor-wire double fenced perimeter enclosing a solitary bird-like figure. Lining the interior courtyard are thousands of rusty scythes, machete blades, and used worker gloves. Pacing the exterior are two upright lambs, one clothed (“ghost”), the other naked save an antelope mask and boots (“harbinger”).

Do not forget to look up: an omniscient imp gazes down from his perch on the back wall. With its high staff to inmate ratio, reinforced perimeter, and multiple forms of surveillance, Security speaks not only to the historical specifics of Alexander’s native South Africa but also to the alienation and personal infringements in the policing of today’s geopolitical boundaries.

Alexander also plays with the guile of innocence and its ability to disarm. In Infantry (2008-10), a troop of mongrels goosestep along a fascist red carpet, their empty, glassy eyes locked in concert at a forty-five degree angle; their movements regulated by a crouching toy dog (in Alexander’s terms, a “beast”); their feet couched in tike-sized booties.

Nearby, a coterie of pint-sized boys stand silent and motionless, adorned in animal-themed masks and, according to the label, “found clothing.” There’s a pathos to the idea of discarded children’s clothes, one amplified by the alternately layered, alternately nude boys of Bom Boys (1998).

The other large installation, African Adventure (1999-2002), takes on a diorama-like effect in its scope and theatricality yet is no less disarming. A large rectangle of reddish dirt serves as a stage for post-apocalyptic justice. The largest figure, “Pangaman,” is hooded and yoked to a trail of scythes, toy tractors, and blades (a reference to Phineas Tshitaundzi, who terrorized the Johannesburg area in the middle of the last century with a panga or machete). Both victim and victimizer, Pangaman is overseen by a miniature cabal of ape-like judges. Despite its foreboding nature, African Adventure speaks more of alienation and disconnect.

Perhaps due to the pure beauty of the images, the most enjoyable segment of Alexander’s exhibition is her photographic essay Survey: Cape of Good Hope (2005-09). Black and white photographs of the city streets of Cape Town and the surrounding landscape are projected in a loop. Certain photographs are left unaltered, while in others Alexander has inserted different characters from her oeuvre, lending the seemingly banal images a haunting, psychic charge.

Alexander’s work certainly owes its political bite to the unresolved legacy of apartheid and the indoctrination of racism still alive in her homeland. As evidenced by the most recent labor unrest and its brutal crackdown by the police, Alexander’s sources are far from historical. At the same time, her tableaux speak to transnational issues such as surveillance, border policing, alienation, and social violence. In particular, her hybrids question what it is to be human and what it means to be part of a social body.