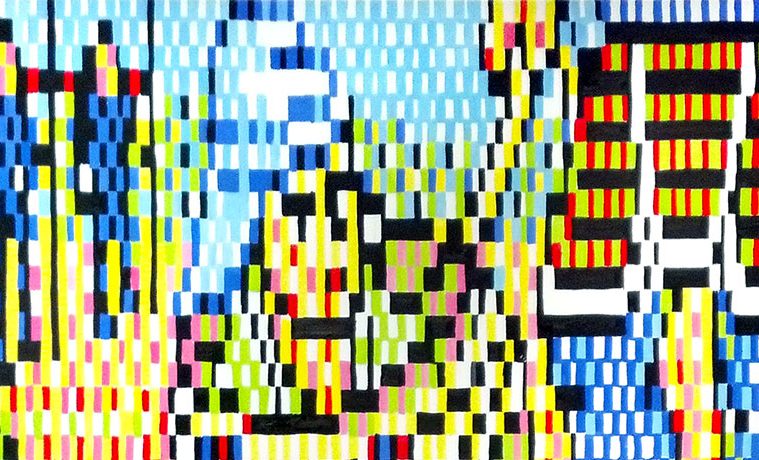 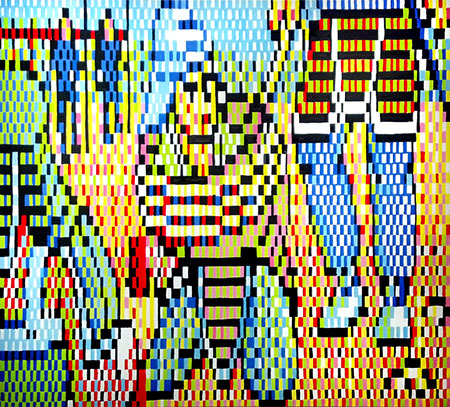 In the three-dimensional works, Im collages layers of vibrant cut Plexiglas, creating a miniature proscenium filled with stimulating colors and figures. The forms are borrowed from Korean television programs and Chinese blockbuster movies, juxtaposing the films’ warlike protagonists against over-sexualized female shapes from accompanying advertisements. Unlike his Landscape series, which reinterprets historical paintings, the source imagery in the sculptures has already been transformed through the lens of contemporary media. Im instead makes his mark by distilling the movie experience into a single moment.

In the Water Margin series, Im’s subject matter is even further removed from its original source: events of 12th century China inspired a historical fiction novel over a century later, which served as the basis for the 1989 turn-based strategy game that bears the same name (released in America under the title Bandit Kings of Ancient China). The paintings’ subject matter directly pulls from the images that accompany the set of decisions a player must make when conquering opposing armies: accept (recruit), release, imprison, or execute.

Im, a former Museum of Fine Arts, Houston Core Fellow, faithfully renders the images in all their pixelated wonder, in a manner similar to Roy Lichtenstein’s half-toned paintings from comic book panels. When viewed closely, the images dissolve into rectilinear patterns. When viewed from across the gallery or through the display of a cellphone’s camera, the figures become obvious. This series marks a change in the artist’s approach: instead of re-creating historic paintings or distilling a time-based experience, Im lets the images stand alone, allowing the viewer to contemplate decisions and consequences.

At first glance the works in War might be mistaken as vacuous, like so much of the pop-inspired work that bombards us. But beneath the saccharine veneer is a thoughtful exhibition that deftly confronts the tension between history entertainment-revisionism.