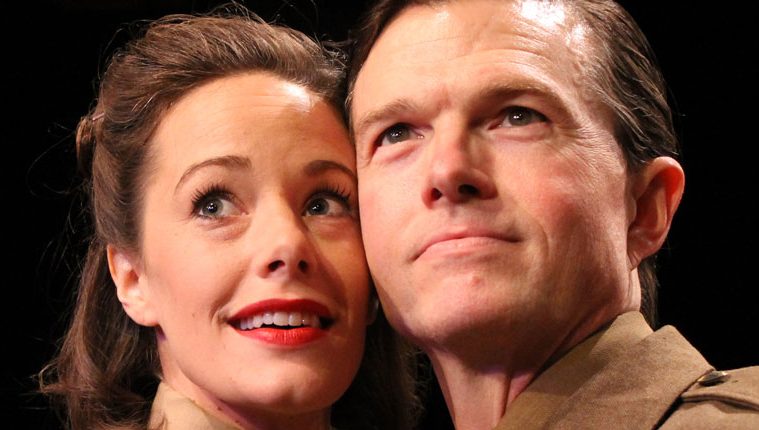 This just in: the battle of the sexes meets the front in Main Street Theater’s rediscovered mid-40’s wartime romance Loves Goes To Press by Martha Gellhorn and Virginia Cowles. Despite the welcome presence of pre-feminist leading women (for once at center of a lovestruck farce) still-dated playwriting needs expert handling from experienced cast to claim victory over hearts and funny bones.

Leading the charge: a completely period-and-picture perfect Crystal O’ Brien, charmingly embodying her all too human war correspondent with a natural, empathetic charisma. Her ally, brashly emotional Elissa Levitt, is the love-‘em-and-leave-‘em dame all can salute. Their various love interests include the dashing yet dastardly Joe Kirkendall as the Hemingway manqué (whose actual wartime divorce from journalist/playwright Gellhorn is said to have inspired the piece), the initially gruff Joel Sandel (with a Yorkshire accent that to this ear sounded more Scot), and the briefly seen but welcome John Strickland as an understandably lovesick flyboy.

Stellar comic support is enlisted from David Wald, Philip Hays, Bobby Haworth, and two-scene gunner Brian Heaton. Less successful, arguably: relative newcomer Dain Geist (yet it’s challenging to share comic relief with the seasoned Wald) and the comely Jacqui Grady, who relies on her natural bubble when a bit more variety might have entered the fray.

Pioneering journalists and playwrights Gellhorn and Cowles (as the prototypes of the O’Brien and Levitt leads) certainly knew their skirmishes, for between them they covered nearly every major global conflict during sixty year-plus careers. Seeming to come less organically is their marriage of contrived romantic farce (mismatched lovers, intercepted letters, mistaken identities, and fortuitous final coincidence) to the realistic setting of a press camp near a very active Italian battle line.

Despite the production team’s clever effects of sound design and room-shaking physical detonation, we are left at a loss to fully commit to either genre. These shifts in the play’s tone are given the best ammunition possible by director Mark Adams’ hard-charging squad of actors, showing considerable esprit de corps, but we are left wanting to see how such talented salvos might be deployed on more even terrain.

Never shirking in their mission to bring us interesting texts, Main Street has once again pushed the envelope and introduced us to writers well worth further exploration. With a target-scope eye and ear, our playwrights hit many bulls-eyes about gender differences, as well as the universal struggle to balance personal lives and careers; at the very least, it makes us want to read more by them and about them. For that, we can thank this theater’s roll call of heroes.

-ROY HAMLIN
Roy Hamlin is a radical thespian of too many decades and too little common sense, with dramatic degrees of refinement despite inveterate clowning.