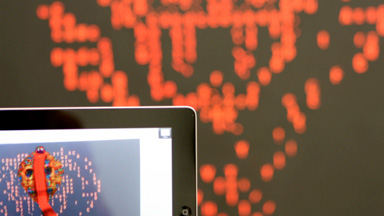 To the naked eye, drug Mike Berandio’s acrylic paintings at Art Palace look like the kind of simple images the gallery says he used to create on a Commodore 64 in the early 1980s; animals or objects rendered in basic outlines consisting of keyboard characters. Hold up an iPad or smartphone, store however, remedy and a cartoon-like version of a rat, snake, skull or bomb pops into view: The paintings function like QR codes, the matrix barcodes found in advertising that require a smartphone or iPad to read.

The effect is even more dramatic and slightly unnerving in the case of a pedestal that’s missing a sculpture until your app reveals the bust of a man in a green T-shirt.

The paintings’ imagery is less interesting than the tension between the antiquated technology they evoke and the perhaps soon-to-be antiquated technology and the Facebook-era penchant for sharing used to view them. They also highlight and take advantage of a lingering digital divide: As ubiquitous as smart-phones are, not everyone has one, and not everyone who does has downloaded or enabled the app that allows it to scan the codes.

This meant that Beradino’s opening reception bridged traditional and digital forms of social interaction as viewers huddled over shared devices, paying attention to their phones, the art and each other. If you check out the show, bring friends, Facebook or otherwise, to share the virtual experience in real time. Just make sure at least one of you has an app for that.