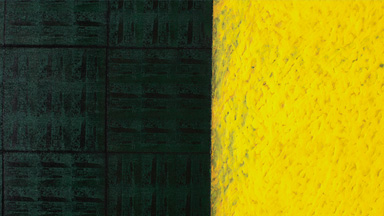 “Perspectives 177: McArthur Binion” is one of two recent exhibitions to open at the Contemporary Arts Museum in Houston. Organized by senior curator Valerie Cassel Olivier “McArthur Binion” features 12 new paintings created specifically by the artist for the occasion of his first solo exhibition at the Museum and the first showing of his work in the city.

Installed in the lower level of CAMH, the works illustrate an engagement with modernism that is easily identifiable. From afar the works appear to display the typical concerns of modernist painting from the preoccupation with issues of color and shape to the minimal installation of the exhibition itself.

Binion posits himself as following a trajectory of artists that includes Kazimir Malevich, Piet Mondrian and Mark Rothko though his own practice signals a marked departure from the aforementioned. Antithetical to Modernism’s insistence on an art that concerned itself solely with formal issues, Binion’s works bear witness to an autobiographical and cultural history. Many of the works are titled with an amalgam of the names of the artist’s son and daughter, Stella and Luca while two others (“GhostWillie” and “Ghost Rhythms: for Thomecat”) pay homage to Binion’s deceased brothers.

The works’ surfaces are often divided with clear delineations between sections with extremely tactile, rough-hewn surfaces, the result of the repetitive build up of applications of staonal crayon. The materiality of these works embodies a corporeal quality that for the artist, harkens to the African scarification rites and the branding of slaves that occurred during slavery. The juxtaposing flattened areas of the paintings are comprised of a series of grids (another testament to the influence of modernism on the artist’s oeuvre) that are stained with color. The artist’s employment of the grid is a nod to West African textiles and to the practice of quilting which figures largely in African-American histories.

The artist’s own mother was a quilter, and Binion has remarked on her skill in the design and assembly of the complex array of shapes and measurements that were required in the construction of a quilt, despite her lack of formal education. The “gridded” sections of each piece are formed from the repetition of imagery derived from a range of sources.

The works “Driving Through Mississippi in Chicago” and “Stellucca: One” incorporate handwritten pages from a phone while others such as “Stellucca: VI” and “All About Stella” appropriate fraught images such as that of a lynched man or a racist caricature of black person found on a European fruit wrapper, attesting to the troubled history of visual representations of the black body within various forms of Western visual culture.