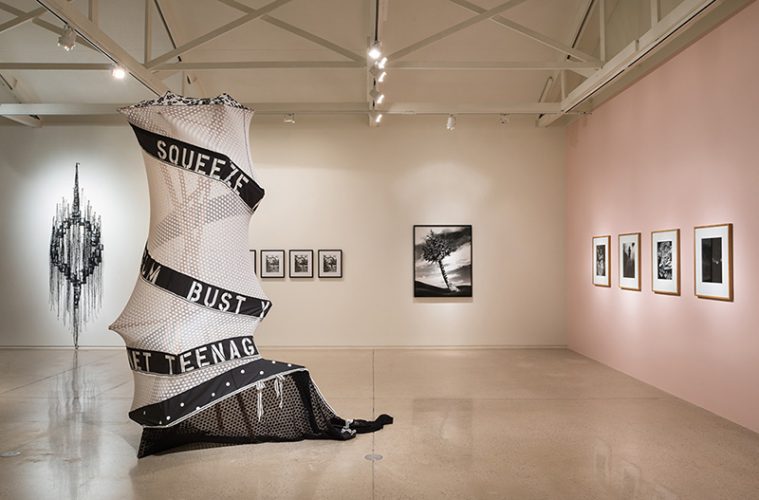 Reclaimed is on view at Ruby City through January 26, 2019.
Photo by Mark Menjivar.

In Reclaimed, the current exhibition through Jan. 26, 2019 at Ruby City in San Antonio, the collection attempts to host a myriad of themes, visual relationships, and connections through a small sampling of works by nine prominent female artists. Yet while such a show skims the surface of such important topics, and indeed projects the importance of reclaiming these identities, it is lacking in the profundity of vision in its curation.

There are a multitude of social, gender, racial, and geographical issues at play in this exhibition. Perhaps that is simply, the complication. One exhibition can never tackle every feminist issue at play, and each of the themes the exhibition seeks to explore complicate what could be a line of exploration or exhibition in and of itself. Perhaps that is the symptom of a larger social issue at play, and as an art space with resources, Ruby City can, in fact, bridge the social gap of visual rhetoric that most arts institutions struggle to do. 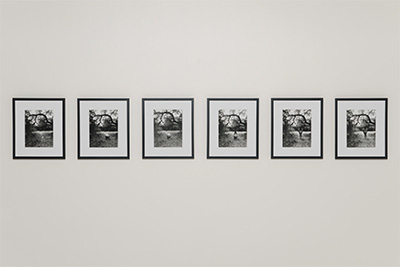 Reclaimed is, without a doubt, an important exhibition. Each of the works from the nine women selected comes directly from the collection at hand, and the vision of its collector, Linda Pace. To walk through the room is to conceptualize the struggle of feminism, ethnicity, and the female body in space through a small yet powerful set of works. However, the exhibition as a whole requires much more work to hold and strengthen the multitude of things the show is claiming to do. To reclaim the body, race, to reconnect with nature, all while exposing a relatively conservative set of medium and techniques in the Foundation’s collection.

The space is small yet completely open. There are minimal gestures to draw the visitor into the work, namely the variety of scale of each of the pieces, and a variety of works acting in a series. In the center of the space sits a large fabric sculpture by Lara Schnitger. Dix-huit, 2005, billows up into the space like a soft tornado, and reveals its wood armature. The work is both exposed and being exposed, as it sits in the middle of the space with its insides completely revealed. On the front the artist has stenciled words such as “tits”, “cum,” and “wet teenage dream”, placing words together to create and imply awkward connotations. On the walls surrounding walls hang mostly works on paper that vary in sizes. Laura Aguilar’s series Stillness (#36-41), six black and white silver gelatin prints show her body in the implied movement from crouching on the ground to standing completely still outside in nature. Her body in space brings artistic voice to body consciousness, the variation the natural female form can take, and its place in nature. Side by side with Annette Messager’s Mes voeux sous filets (my wishes under nets) from 2000, the works harken on the female body, and specifically with Messager’s reference to netting, on the expectation of bondage for the female body with undergarments and clothing in general. Messenger subtly comments on the line between sexualization and conservatism. 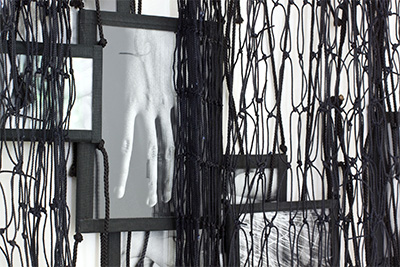 The body is the strongest thematic thread throughout the exhibition, and the ways in which the nine artists explore the female body and its relationship to gender is indeed an intriguing task. Dorothy Cross’s Arms, 1996, two full arms from shoulder to fingertip cast in bronze each have an extended index finger gesturing towards a direction, yet both are pointed in opposite directions. Judy Dater’s photographs harken back to Laura Aguilar, yes place the female nude in direct confrontation with the camera lense and the viewer in a much more aggressive gesture of power.

In this exhibition of nine artists, there is only the smallest hint of color, it is also a nuanced and deliberate gesture in order to explore the many themes of the body without the distraction of color. However, the title wall is painted  light, fleshy pink, a color that wraps around the wall and extends through the gallery. It is the boldest gesture of the exhibition, and it is a gesture through which the color is also reclaimed from one that is oftentimes translated to girly femininity. Here the color is in conversation with the space and the artists, and pronounces its own connectivity between the works at play. Ironically, the exhibition also seeks to denounce color blindness in a feminist world, attempting to reclaim not only the body, but also race and identity. The exhibition is shockingly void of color with the exception of the fleshy pink wall. 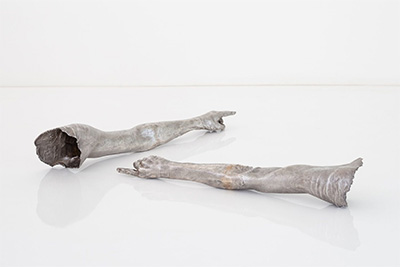 Perhaps Reclaimed suffers from trying to do too much rather than emphasizing one line of thought and strengthening its own thesis. To see nine strong female artistic voices in one room, whose careers span more than 40 years between them, is impressive, and the works are indeed critical, and still timely. Perhaps visiting the exhibition, and focusing on how each of the artists treats the body as central subject matter alone is a powerful enough point of entry into the exhibition.