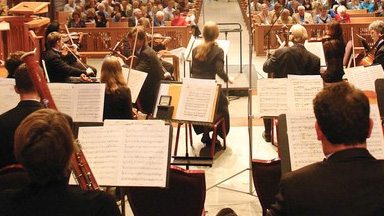 It is a rare occasion when Houston music lovers have the opportunity to enjoy a world premiere on an orchestral program. However, with its most recent concert featuring a brand new work by Paul English, the River Oaks Chamber Orchestra (ROCO) continues to prove why it’s a crown jewel of musical life in the Bayou City.

Known largely for his impeccable skills as a jazz pianist, Paul English shows his consummate command of the orchestra with “Lumière Lunaire (reflétée) — A Fantasy for Orchestra” with text by conductor JoAnn Falletta. Commissioned by ROCO to celebrate 100 years of “Pierrot Lunaire,” the notorious and seminal melodrama by Arnold Schoenberg, English’s new work is a catalogue of 20th century tropes. With echoes of Schoenberg’s original, Stravinsky, Copland and hints of Dizzy Gillespie, the piece is a promenade through the history of 20th century music.

Placed at the beginning of the evening, this delightful new work was a tough act to follow, but cellist Richard Belcher did so with chipper elegance and panache as he joined the orchestra for a performance of the “Cello Concerto in CMajor” by Joseph Haydn. Having heard Belcher many times with his Enso String Quartet, it was a thrilling departure to see him take center stage with this old friend of a concerto.

ROCO rounded out the evening with a crisp and articulate performance of Franz Schubert’s “Tragic Symphony.” It was anything but tragic and a grand finale to a spectacularly well-rounded evening of music which even included a nod to the late Whitney Houston on the day of her funeral as the ROCO horn section called the audience back from the break with an arrangement of “I Have Nothing” for four horns. Once again, ROCO lives up to its motto of “the most fun you can have with serious music.”