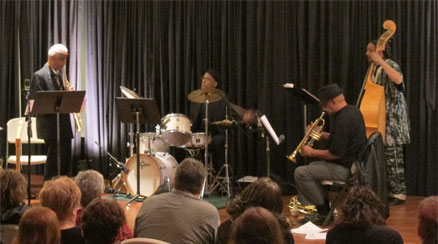 On March 29th, Roscoe Mitchell’s Houston residency with Nameless Sound came to a joyous end at the Eldorado Ballroom. The quartet, featuring trumpeter Hugh Ragin, bassist Jaribu Shahid, and drummer Tani Tabbal, played two solid sets, each of which felt fully-fledged on its own.

Roscoe Mitchell is chair of composition at Mills College in Oakland, CA.

In 1965, Mitchell helped found the nonprofit organization, The Association for the Advancement of Creative Musicians (AACM). He was a core member of the widely acclaimed Art Ensemble of Chicago.

Long before I’d heard of Roscoe Mitchell, I remember my friends playing  the Art Ensemble’s 1973 studio recording, Fanfare for the Warriors, which inspired us to pick up pots and pans and little flutes and danced around the room for hours, playing along to the record like feral children.

At the Eldorado, the quartet began in quiet contemplation. Mitchell’s compositions grow outward from nebulous textures like vines in the garden, finally peaking in boundless torrents of sound.

When blowing at full blast, Mitchell seems to be pushing so much air through his horn that it’s stretching, filled beyond its physical volume, singing in a new way.

Jazz (apparently) broke with tradition so long ago, but that doesn’t mean there aren’t investigations left to be made. To me, Mitchell is investigating the nature of the instrument itself. Each object has its own distinct vibration. No two flutes sing the same songs. Mitchell has a variety of horns, ranging from the traditional alto to a bamboo bassoon of sorts. The lack of a so called traditional harmonic structure opens a space in which the song of each of his saxophones can be heard clearly, each on their own like lone birds taking turns in the forest.

Mitchell has an unmistakable virtuosity. His endurance is appalling. He circular-breathes, pumping gallons and gallons of air into his instrument for minutes at a time, while ripping his fingers through incredibly dense sonic textures, but this is all in balance with the introspective musicality in his compositions. The band asks itself the right questions and answers them quite well.

The large crowd packed itself tightly into the rows of humble folding chairs to hear them play for three solid hours. Whenever I’m locked into “the zone” listening to a soloist or ensemble, I catch myself rocking back and forth in my chair instinctively leaning in as if I could somehow catch a note a little better. In these moments I looked around myself and saw everyone else rocking too, finding the same feeling, all together.

I like the plain aesthetics of the ballroom. Maybe it’s nostalgia, but it reminds me of the simple, wonderfully bland decor of European halls where jazz greats in the 50s and 60s played (or so I see when I watch videos on youtube). We’re here to hear the music: no need for the fog machine.

When they ended with a brief “traditional” composition, we all let out a little laugh, a release of the joyful tension we’d shared all night.

-JOSEPH WOZNY
Joseph Wozny is a writer and musician in Houston.