REVIEW: ‘Swimming While Drowning’ at Stages 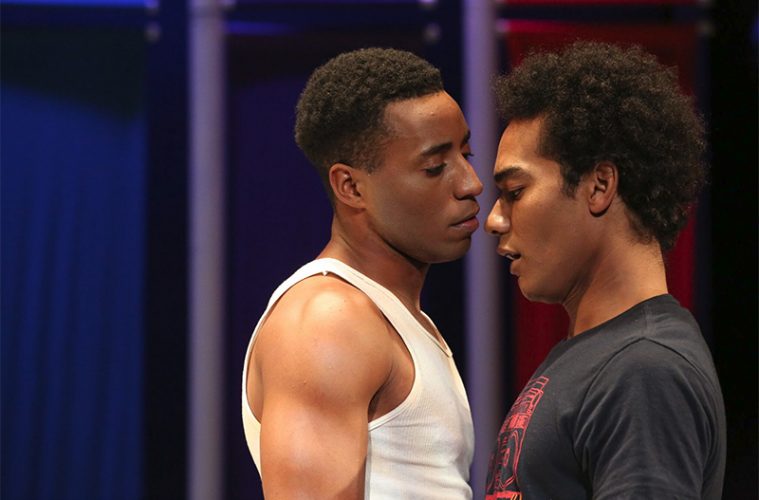 Ah, young love, that time in life when two star-crossed lovers might feel they exist in a world to themselves or the whole world is out to pull them asunder. Both outlooks appear accurate for fifteen-year-olds Angelo (Reginald Choyce) and Mila (Stanley Andrew Jackson III) in Emilio Rodriguez’s Swimming While Drowning at Stages Repertory Theatre (through Oct. 21). The young men first meet (not-so-much cute) as tragic when they room together at a LGBT homeless shelter. One open and bubbling with dreams laced with one big lie, the other closed and hostile to the world at large, the young men find a place of calm waters in the tempest of their lives.

Rodriguez volunteered in an LGBT shelter and used some of his time there as inspiration, and so the almost unsurmountable challenges both young men face are very real. Yet the structure of this two-man play, along with Alice Gatling’s directing, sometimes puts the story into a kind of lyrical pocket-reality outside time and place. 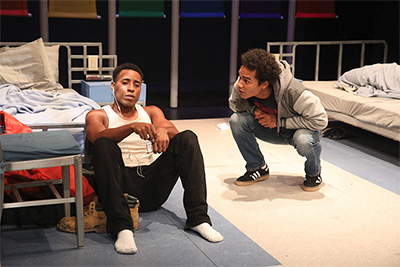 Set almost entirely in their room at the shelter–a place of refuge, though still filled with conflict–they share secrets and lies, and eventually a deep connection. Gatling’s staging and Kirk Domer’s utilitarian design to create what is essentially a dorm room makes their private space feel solid and real. More metaphorical is a set of rainbow banners which act as border and doors between their safe harbor and the harsh streets ready to claim them if they break the shelter rules. Yet, when either does venture out, always on their own, they react to threats and persons that the audience never sees except as sirens or car lights, making the world outside their room seem abstract and remote.

From the first scene we discover Angelo loves poetry and uses it as a way to document his growing infatuated with the tougher Mila. The more street-wise Mila meets Angelo’s offer of friendship with guarded barks and threats.

Poetry becomes Angelo’s salvation but it also serves as an organizing guide through the play as both men break into spoken word poetry or rap interludes which separate major scenes. While the verse they recite and sometimes rap seems to be purposefully rough and sometimes adolescent, it serves to give the whole show a feel that the many discussions the young men have about God, death, survival, language and a late night reading of The Ugly Duckling children’s book are but another stanza of a play-long poem. 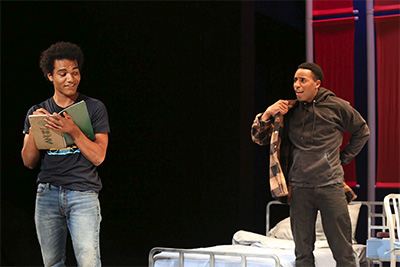 Gatling, who recently helmed the brilliant We Are Proud to Present at Stages, another play with major tonal shifts, has a somewhat more difficult task with Swimming, which occasionally feels caught off balance between the real cultural and social issues built into these two lives and the sometimes dream-like, romantic atmosphere of the production.

As their relationship progresses, Angelo begins to treat Mila as a beloved muse whose life gives him fodder for his poetry. Muse is a tough job to begin with, but Rodriguez visits tragedy after tragedy upon Mila as if he’s a Gen Z Biblical Job. Mila is never even allowed Job’s opportunity to question God on His (or in the case of Swimming’s theology, Her) unfair managing of the universe. Jackson makes an admirable and mostly successful attempt to make Mila human under the burden of all those tribulations laid upon him by his creator, in this case Rodriguez. Jackson gives his portrayal of Mila a defensive vulnerability, and the surprising amount of humor throughout the play also alleviates some of the weight of all the topical issues put upon Mila. But at some point audiences might readmit that suspended disbelief and require the playwright to cut the character at least one break.

Swimming While Drowning sometimes flails in its commitment to do so much in 90 minutes: give voice to those seldom heard, tell a quiet love story and proclaim the power of poetry. Yet, it does gift us with bit of hope that human connection can rescue and bring us safely to shore.