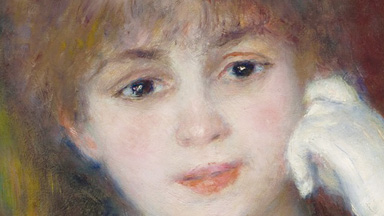 Review: The Age of Impressionism

Regardless of one’s opinion about Impressionism, the Kimbell Art Museum’s latest special exhibition — emphasis on special — might render even the most vociferous opponent mute. “The Age of Impressionism: Great French Paintings from the Clark” is an acutely serene experience. And whether you are a devotee or a dissenter, you cannot deny the sheer scope of the movement depicted here — notably how it affected subsequent art history — and the engaging nature of this show.

Beautifully staged, it is chalk full of iconic Impressionist paintings, particularly a treasure trove of Renoir works, such as “A Box at the Theater (At the Concert),” and “Self-Portrait,” (c. 1875). From the Sterling and Francine Clark Art Institute (Williamstown, Mass.), the exhibition examines the collectors’ keen predilection for Renoir, whose paintings account for nearly a third of the display, and in fact, they serve almost as the denouement in “The Age of Impressionism,” where they are viewed at the midpoint of the show: Everything afterward feels like gravy. Renoir’s “Sleeping Girl,” which is mounted on a “take notice” blue wall seems to emphasize this.

That’s not to say viewing Berthe Morisot’s lovely “The Bath” or Monet’s “Geese in the Brook” is a totally unappreciated experience. The caliber of the Clark’s collection is top-notch and discerningly winsome.

Helpfully chronological, the exhibition breaks it down for the layperson, and includes sections such as Portraits and Still Life and The End of Impressionism. In the latter, Gauguin’s “Young Christian Girl” seeks to serve as an end note, its bright yellow and rainbow-palette background a welcome complement to the show’s earlier-gallery pieces, especially Gerome’s “Fellah Women Drawing Water,” with its somewhat technical rendering. In truth, it could be said there is something for everyone here, where the elegantly understated “Seated Nude” (Bouguereau) is a perfect foil to “The Cliffs at Etretat” (Monet).

The Kimbell is the only U.S. venue for the exhibition, which also features an impressive 240-page catalog with essays by James A. Ganz and Richard R. Brettell. Concurrently, the Amon Carter Museum of Art next door presents four other Clark-collection works by John Singer Sargent in the focus exhibition “Sargent’s Youthful Genius: Paintings from the Clark.” When viewed together, the two presentations underscore the wondrous breadth of works from the Clark Institute.