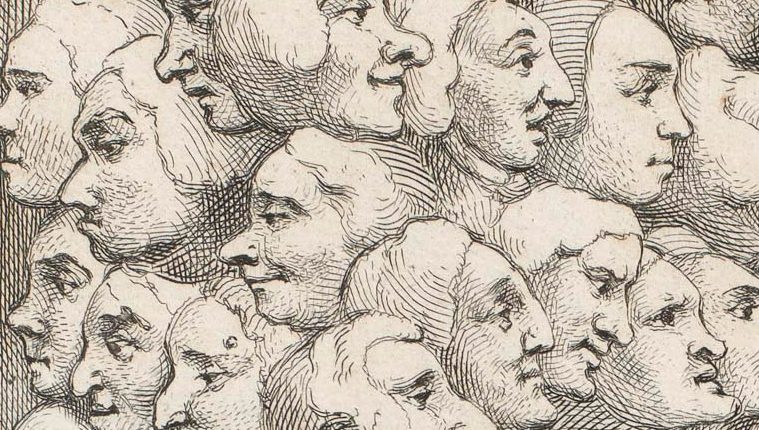 Review: The Art of Exaggeration

Walking through The Art of Exaggeration at the Museum of Fine Arts, Houston feels like being privy to an inside joke. From simple caricatures to controversial political satires, viewers are engaged in a comedic, intimate, and disturbing discourse between artists like Francisco Goya, Man Ray, William Hogarth, and Robert Crumb.

One of the earliest pieces is an etching after Pieter Bruegel the Elder. Published in 1559, Fair Day of Saint George depicts a religious celebration, but upon closer inspection countless scenes of debauchery are discernible, including dancing, drinking, and playing games. Somewhere in the crowd, one man warns against the pitfalls of human folly, turning the etching into a renaissance Where’s Waldo for the virtuous man in tights.

Psychologically the darkest and most poignant works on view, Goya’s small etchings still hold emotional weight nearly 200 years after he began Los Proverbios, a series warning against human vanity and viciousness. Part of Goya’s Los Proverbios is Disparate Desordenado, Desparate Matrimonial, (Disparate  Folly or Matrimonial Folly) which grotesquely fuses man and woman together. A gruesome caricature of “the old ball and chain”, Goya instills the fear of commitment in us all.

Caricature’s popularity reached new heights at the turn of the 18th century Britain produced some of the most notable political cartoons. Showcasing his wit and technical precision, William Hogarth’s etching from 1761, The Five Orders of Periwigs, mocks the British upper class by architecturally mapping out the overgrown powdered wigs of the aristocracy. Hogarth’s blueprints for this ornate fashion trend reveal a longstanding truth – only the wealthy can afford to look ridiculous.

More recent is Surrealist Salvador Dalí’s 1977 etching Lima de los Dientes  (Hunting for Teeth), an adaptation of one of Goya’s Caprichos (caprices), which opposed the popular beliefs and superstitions of Spanish civilized society at the end of the 18th century. Dalí’s modern addition of color and softer line bring the darkness of Goya to light by introducing an odd buoyancy to the tragic subject matter.

Hanging on a bright red wall is a notebook-sized lithograph from 1967 by Man Ray. One of the most visually striking images, it is also the most vulnerable. A wall text says the image “is most likely a symbolic self-portrait, assembled with netting for hair, two eggs for eyes, and handprints.” Unlike the bulbous noses of 16th century peasants or American politicians standing on hooves instead of feet, Man Ray turns the art of exaggeration upon himself to reveal an inner caricature.

From illustrator Robert Crumb’s self portrait drawn on a napkin to Thomas Nast’s meticulous etchings of political satire, The Art of Exaggeration is a hilarious, thought provoking, and eye-opening exhibition. Full of surprises, each work initiates a dialogue blurring the line between fantasy and reality. Amongst the wall texts a quote from French poet Baudelaire resonates: “Caricatures are often the most faithful mirrors of life.”

-DEBRA BARRERA
Debra Barrera is a local artist and writer.