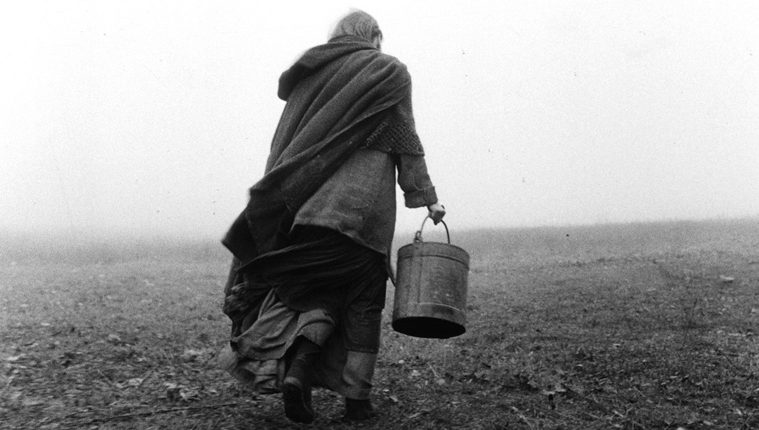 The Turin Horse by Bella Tarr at the Museum of Fine Arts, Houston.

The Museum of Fine Arts, Houston

Béla Tarr claims The Turin Horse will be his last film, and unlike American celebrities who use retirement as a PR scam, he’ll probably stick to his word. The Turin Horse is a haunting bookend for his nine film career. It begins in darkness as a voice describes the famed encounter between Friedrich Nietzsche and the Turin horse. This is the horse that Nietzsche supposedly threw his arms around while he wept and began his descent into dementia that was more likely caused by his syphilis than the horse. It’s a compelling image—the weeping philosopher and the horse—but it’s one we aren’t shown. We know what happened to Nietzsche, but Tarr asks, “What happened to the horse?”

I was introduced to Tarr’s work with his 2002 Werckmeister Harmonies, a strange tale featuring a giant whale, a chaos obsessed prince, and a town full of powerless souls trying to cope with communal fear and paranoia. I followed Werckmeister Harmonies with his sprawling 1994 seven-hour epic, Satantango, also full of poor creatures unable to transcend the simplest of petty desires and hopes.

I fell in love with the camera work of Fred Kelemen, Tarr’s cinematographer. His carefully orchestrated movements are expansive and graceful. The camera seamlessly peers down the street, through doorways, over crowds, into the cracks of men’s’ beards, and right back out to the top of the night sky. Some of the shots are as long as 11 minutes (the average cut length in The Bourne Ultimatum is about two-seconds). The Turin Horse clocks in at two and a half hours, using only 30 shots.

Most of The Turin Horse is spent watching Ohlsdorfer and his daughter (only known as Ohlsdorfer’s daughter) go through daily rituals. Ohlsdorfer stands still at the bed waiting for his daughter to take off his outside clothes and put on his inside clothes and vice versa. She also gets water from the well and boils potatoes. He eats the potatoes quickly like a dog while she takes her time.

Each morning they have a drink of brandy. He always has two shots and she always has one. For one brief moment a neighbor stops by to deliver a monologue about the moral destruction of the town, confirming there is nothing more to their lives than the hours spent waiting for the potatoes to boil. Meanwhile, some gypsies come to steal water from the well and Ohlsdorfer chases them off with an axe in his hand. Each day they attempt to get the horse to pull a cart and eat, but the horse refuses and it’s put back in the barn.

The Turin Horse by Bella Tarr at the Museum of Fine Arts, Houston.

Nothing much happens in The Turin Horse, but Tarr is open about his views on the futility of plot. He says, “I don’t care about stories. I never did. Every story is the same. We have no new stories. The film isn’t the story. It’s mostly picture, sound, and a lot of emotions.”

Tarr has finally stripped the most he could from a film, leaving only Ohlsdorfer and his daughter’s bodies, a few spare words, the howl of the wind, and the one piece of music in the film, which was composed by Mihály Víg, a longtime Tarr collaborator. Perhaps that’s why he doesn’t want to make any more films, there’s nothing much left to strip away.

It would be easy to mistake these grim events as fatalistic or nihilistic, convinced that because life is meaningless for Ohlsdorfer and his daughter, it must be for his audience.   However, I don’t think Tarr is trying to draw any philosophical conclusions. He believes that the problems of the world are universal and constant, and in spite of that, people have to live their lives. Through the carefully constructed world of film, Tarr wants to show you these people’s lives, their emotions, and their dinner, even if it’s just a potato.

Retiring in your mid 50’s could be a noble gesture. People confuse “Having nothing left to say” with “having said all that you wanted to say.” I believe Tarr said everything he wanted to with his art, and he doesn’t seem to have any reservations. The Turin Horse is a fitting last message.

–JOSEPH WOZNY
Joe Wozny is a Houston based writer and musician.