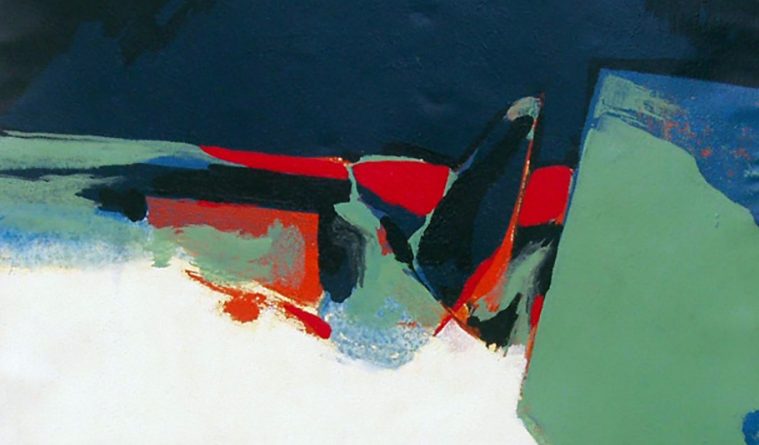 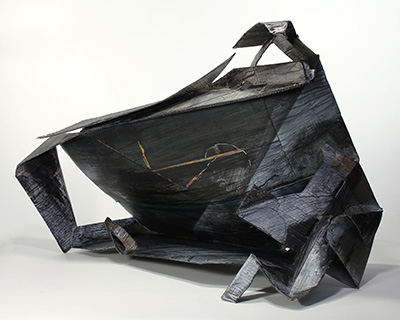 “I’ve always liked to work from home,” says Richard Stout, the Beaumont-born painter, sculptor, and elder statesman of the Houston art world, as we sit in the Montrose-area studio he built 50 years ago behind his house. “I’ve never liked to go someplace to work. I like getting out of bed and seeing what I have to do.”

Even during a hurricane. Referring to the painting currently sitting on his easel, which characteristically combines architectonic forms with meditative intimations of the sea, Stout says, “I think it’s done. It’s the second of my two storm paintings” executed during and immediately after Harvey’s unwelcome sojourn through Houston. Even at 83 years old, it takes more than a hurricane to disrupt Stout’s disciplined practice.

Assessing his long, productive career requires unpacking several contexts, as Sense of Home: The Art of Richard Stout, a traveling retrospective on view Sept. 30 through Dec. 3 at the Art Museum of Southeast Texas in Beaumont attempts to do. One of the youngest of the second-generation abstract expressionists, he invites comparison with such figures as Alfred Leslie and Grace Hartigan, whose vigorous brushwork brought them attention in the 1950s but whose changing styles have made their oeuvres tricky to summarize. Among the last of his generation of Lone Star artists still living and making work, he’s near the top of any shortlist of pivotal Texas late modernists. And while calling Stout a marine painter doesn’t quite nail it, particularly given his frequent, imaginative use of interiors and architectonic elements, there’s no escaping the recurring, haunting presence of the Texas coast in his work.

“Over the course of his career, Stout’s exploration of his primal landscape has led him down multiple avenues of expression but ever as a means of realizing visually his inner topography,” writes Mark White, director of the University of Oklahoma’s Fred Jones Jr. Museum of Art, in the exhibition catalog. “His poetic images of domestic spaces and coastal landscape echo memories and experiences inextricably bound to his sense of being. For the viewer, the paintings offer new ways to consider existing and evolving relationships to places of intimacy.” 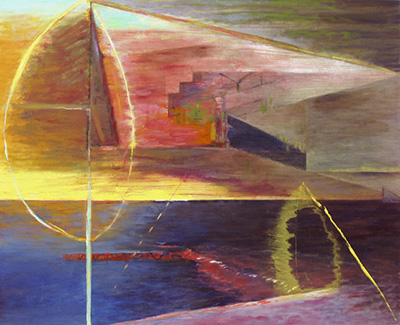 Exhibiting talent even as a teen and becoming the “darling” of the Beaumont Art League and Beaumont Art Museum, Stout won a 4-year scholarship and studied at the School of the Art Institute of Chicago from 1953 to 1957, gaining direct exposure to the museum’s exceptional collection, which already included Willem de Kooning’s monumental landmark 1950 painting Excavation, selectively absorbing Bauhaus influences from his senior painting teacher, Paul Wieghardt (1897-1969); and developing a taste for the architecture of Mies van der Rohe. Major works the Chicago years include a large 1957 triptych whose components, Cave, Flowers, and Passion, now belong to different collectors and are being reunited for the survey. The previous year, Stout painted his Seiche series, examples of which are on view in Beaumont. The title refers to “temporary oscillations in water bodies that are often caused by atmospheric pressure,” writes catalog contributor Katie Robinson Edwards, director of Austin’s Umlauf Sculpture Garden and Museum. “They occur more frequently in water with narrow openings to a larger sea or gulf, like Galveston Bay.”

As Edwards notes, Stout’s interest in seiches seems relevant to what became a recurring, and distinctive, element in his work: the insertion of shapes into what otherwise read as seascapes or landscapes. By the early 1960s—a few years after Stout finished school and resettled in Houston—those shapes increasingly resembled domes, as in works like Green Moonrise, Blue Dome, or architectural elements and polygonal planes, as in December and Remembrance. In a particularly striking example, SS Sweeney, the dome shape reads as a moon hemisphere and is combined with jostling rectilinear forms in a way that suggests “a sinking ship set against a pitch-black sky,” Edwards writes.

Named after former Museum of Fine Arts, Houston director James Johnson Sweeney—and painted the year after Sweeney’s stormy six-year tenure ended—the painting includes a wispy white squiggle that for Edwards evokes “a lifebuoy on a thin skein of rope.” During the 1970s Stout would increasingly exploit tensions between geometric or planar elements and expressionistic evocations of the sea, and by the 1980s he had developed the intriguing merger of seascape with interior that he has continued to explore well into the 21st century.

Curated by Sarah Beth Wilson, AMSET’s curator of exhibitions and collections, Sense of Home will travel to the Art Museum of South Texas in Corpus Christi and to the University of Houston-Downtown, effectively giving Stout’s art a grand tour of the coast that has so inspired him. That’s fitting, however much one might wish to see the survey travel further afield. As Edwards writes, “Stout’s longtime connectivity to the Gulf and his use of this framework as a means of expression are unique among 20th century Southern artists.” While fellow Texas modernists such as Forrest Bess, Dorothy Hood, Toni LaSelle, Robert Preusser, and Dick Wray veered toward total or near-total abstraction—or, in the cases of Jack Boynton and Jim Love, ventured into Pop—Stout “would always return to the overt influence of the Gulf,” Edwards writes. “Stout’s work has always been anchored to the coast, returning to it again and again as a perpetual source.”