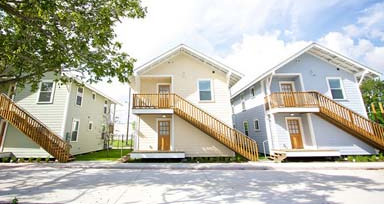 Round 36 is the latest series of artist projects at Houston’s Project Row Houses. As the first of recent rounds to feature installations that are not bound by a particular curatorial remit, order one might expect the grouping of projects to feel uneven and disjointed. While it is true that there is not necessarily a unifying thread that runs through all the exhibitions, one experiences them as a series of individual installations that are individually engaging and compelling.

Kenyatta A.C. Hinkle’s installation, Kentifrican Museum, positioned as an ethnographic museum, is concerned with the exploration of Kentifrica, an imagined and real space that was created through the confluence of Kentuckian and African diasporic culture.  Kentifrican musical objects are displayed as are “found” drawings and photographs of Kentifrican hairstyles (which look suspiciously like contemporary African American hairstyles) and vessels fused together from pottery bowls and mirrors.

As convincing as they are in their authenticity, the accompanying wall texts lead us to question the authoritative tone inherent in all museological didactic texts.

Irvin Tepper’s The Fragility of Hope features mural digital portraits of homeless individuals in an effort to highlight the formal beauty found in the compositions created by the subject’s supine bodies and possessions. Tepper’s artist statements (which are posted throughout the installation space) do not state that he created these works in collaboration with his subjects, which raises ethical questions around issues of agency and exploitation.

However, the more likely scenario is that Tepper is attempting to position his subjects beyond the confines of abject misery and degradation, as is evidenced by his portrait of “Stackman,” a homeless man who lived in Houston’s Second Ward. Flanked by six smaller glossy color photographs that document the subject’s own sculptures fashioned from found objects and ephemera. Tepper asserts that they are a form of assemblage that allows Stackman to create order in his environment.

Beth Secor’s Blueprint for Heaven incorporates the site as a key element of her installation. The walls of the row house function as a support for the mixed media diagrams that label and identify the cross-section drawings of a plane and serve as an homage to her recently deceased father and her own conception of heaven.

Manuel Acevedo’s The House that Alhacen Built also serves as an homage, in this case to Ibn Al-Hacen. Perhaps the most abstract of all the projects in Round 36, it is presented as a meditation on “visual perception in cinematic visual forms and the ephemeral nature of light.” The entry into the house features a grid of 33 close up images of eyes.

Inside the house are two separate installations of light.  One is created through the incandescent light channeled through perforations in the back wall of the house and reflected on a backdrop. The other features shifting light patterns that emanate from a projector and refract against mirrors placed against the wall.

In a decidedly different installation, Philip Pyle II’s Value questions the relationships between African Americans, commerce, and materialism. The piece carries a slightly irreverent and humorous tone. The window and door frames are painted gold, and in a digital print, the figure of Christ sports a gold chain that bears a jewel encrusted pendant shaped in his image. Christ’s finger directs the gaze of the viewer towards the pendant so that there is no chance of it being missed.

The installations The Cultural Portal: Reclaiming Our Image (by the collective Our Image Film and Arts) and John Pluecker’s Antena Books: Pop-up Bookstore and Literary Experimentation Lab rely on viewer engagement and participation to activate the installations. The former features posters and images of film that ask viewers to critically assess the ways in which black subjects are depicted in film and other forms of media. The latter transforms the row house into a veritable bookstore, displaying literary works printed at small and alternative presses by mainly African American and Latino authors aimed at facilitating intercultural exchange and dialogue.

Supplemented by a series of “read and write” workshops, participants are encouraged to both read the titles on display and try their own hand at producing experimental literature, underscored by the presence of typewriters and a computer terminal within the space.

–SALLY FRATER
Sally Frater is currently a fellow in the CORE Critical Studies Residency Program at the Glassell School at the Museum of Fine Arts, Houston.