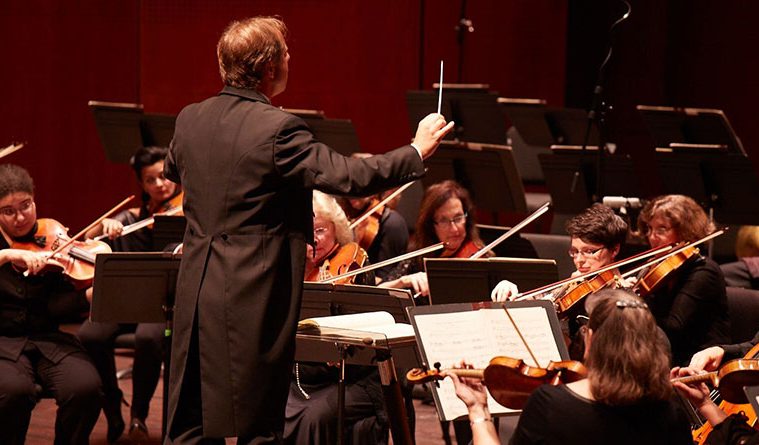 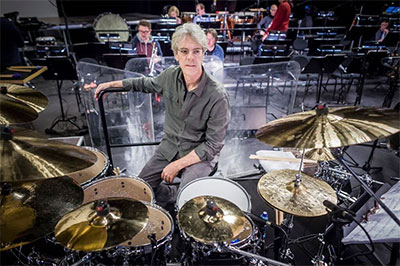 Stewart Copeland, a composer, drummer and founder of The Police, performs with the San Antonio Symphony as part of The Tyrant’s Crush Concerto at the Tobin Center on Nov. 4-5 at 8 p.m.

Carmina Burana always packs a wallop. This time, Carl Orff’s paean to frolic and fate delivered a double whammy: Not only did the San Antonio Symphony and Chorus lay into Orff’s lusty themes and booming sonorities with gusto, but the live-wire acoustics in the orchestra’s home turned all that into a visceral experience. Drumbeats massaged the listener’s ribcage; fanfares made armrests vibrate. Even the gentle Round Dance boasted an arrestingly resonant tone.

The orchestra’s former concert hall, the Majestic Theatre—a Mediterranean-fantasy movie palace from the 1920s—surrounded the group with old-Hollywood glamour. But the dry acoustics fought the music, said Sebastian Lang-Lessing, the ensemble’s music director. So the orchestra gladly forsook the Majestic when the Tobin Center for the Performing Arts opened in 2014.

“There’s no comparison,” Lang-Lessing said, after the September performance of Carmina Burana, sitting in one of the HEB Performance Hall’s boxes. “This is a real hall.” Its shoebox shape allies it with classic European venues, and by dividing the 1,700 seats among a compact main floor and three slim balconies, the hall keeps everyone nearer the stage than in more spread-out theaters. “These are really fantastic conditions,” Lang-Lessing said.

The orchestra will capitalize on the setting this season with a festival centering on Mozart, whose subtleties would have been lost in the Majestic, Lang-Lessing said. The programs will put the Viennese prodigy alongside composers such as Felix Mendelssohn and Gabriel Fauré, whose works resonate with his. The rest of the orchestra’s classical series mixes cornerstones of the symphonic repertoire—such as Franz Schubert’s Unfinished Symphony, Felix Mendelssohn’s Violin Concerto and Camille Saint-Saens’ Organ Symphony—with unjustly neglected items from the past and compelling works of more recent times. 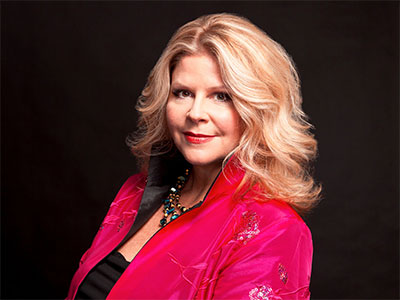 Susan Graham performs with the San Antonio Symphony on May 12 & 13, 2017, at the H-E-B Performance Hall at the Tobin Center. Photo by B Ealovega.

Mezzo-soprano Susan Graham, a Midland native who’s a mainstay of leading opera houses and orchestras, will perform La Mort de Cléopâtre (May 13-14), a dramatic but rarely heard scena by Hector Berlioz. Stewart Copeland, former drummer of the rock band The Police, will solo in his own concerto for trap set: Tyrant’s Crush (Nov. 4-5), the story of a man who seizes power in a nation and has to live with his deeds. Copeland, who first performed with the San Antonio Symphony in 2015, is “a fantastic musician—a classically trained rock ’n’ roller who knows how to make an orchestra rock,” Lang-Lessing said. Tyrant’s Crush embodies “a very genuine style. You’re not just the backdrop for some craziness on the drum set. It jells together as one.”

When the orchestra turns to iconic works, Lang-Lessing wants to display them in fresh lights. Because he thinks Franz Schubert’s lyrical, soul-searching music is the foundation of Gustav Mahler’s works, one program will lead from the Unfinished Symphony to Mahler’s Symphony No. 4. (March 31-April 1). Another program will pair Tchaikovsky’s Pathétique Symphony with an orchestral condensation of Richard Wagner’s Parsifal (Nov. 18-20). “It’s two swan songs of great composers,” Lang-Lessing says. “Very spiritual. They’re both farewells to the world.”

The San Antonio Symphony’s history of broadening audiences’ musical horizons goes back to its founder, Italian-born conductor Max Reiter. After launching his career in Germany, Reiter fled the upheavals of the 1930s and settled in the United States, hoping to found an orchestra. The story goes, Lang-Lessing says, that the Steinway Company pointed him toward Texas because it was the prestigious piano maker’s top market. Reiter clicked with San Antonio leaders, and the orchestra debuted in 1939—the beginning of a “very exciting history,” Lang-Lessing said.

Thanks to Reiter’s links to composer Richard Strauss, the orchestra performed a few of Strauss’ works their U.S. premieres, and it played the world premiere of the concert version of Strauss’ ballet Josephslegende. Reiter also launched children’s concerts long before they became de rigueur for U.S. orchestras. But the orchestra has faced several bouts of growing pains in the form of financial troubles. The 2003-04 season was called off as the orchestra reorganized through the bankruptcy process, and deficits broke out again after the 2008 recession. 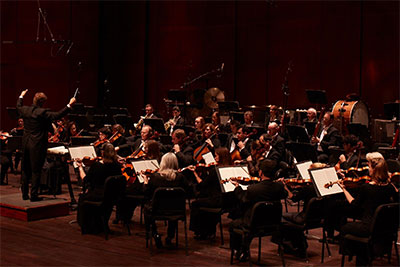 The orchestra brought Lang-Lessing on board in 2010. Born in 1966 in Germany, he studied conducting in Hamburg and launched his career in European opera houses and concert halls. Houston Grand Opera presented his U.S. debut in 1997, when he conducted Engelbert Humperdinck’s Hansel and Gretel; he returned in 2006 for Georges Bizet’s Carmen.

This season’s engagements take Lang-Lessing from Seattle to the Canary Islands. Home, though, is San Antonio. Even though the orchestra’s last season ended in the black, the group has to watch its spending, and its musicians have agreed to give up three weeks’ work this season. Lang-Lessing, wary of a slippery slope, hopes to find a way to reinstate the work. Thinking longer-term, he hopes to win San Antonio over to composers “who are here called box-office poison.” Anton Bruckner’s sonorous symphonies would be “fantastic” in the reverberant HEB Performance Hall, he says. He thinks the Second Viennese School of Arnold Schoenberg, Alban Berg and Anton Webern would click with audiences if the orchestra put the composers’ works along those of their forebears, such as Mozart.

Lang-Lessing also wants the orchestra to commission more work. A set of 14 short works it premiered in 2014-15 included several pieces he thinks will last, including Clave Dorada by Mexico’s Arturo Marquez, whose Danzón No. 2 is a Latin classic. Lang-Lessing plans to spotlight the zesty work in 2018, San Antonio’s tercentennial. “It captures the spirit of San Antonio,” Lang-Lessing says. “It’s three minutes (long), building to a fantastic climax… I call it the anthem of San Antonio.”