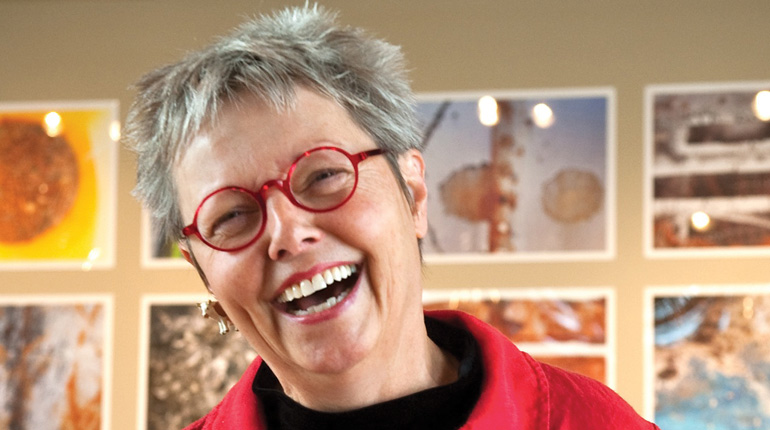 Few artists seem as comfortable working in different mediums as Alpine, Texas-based Barbel Helmert. Born in Krefeld Germany in 1947, Helmert has since studied ceramics at the San Antonio Art Institute in Texas and printmaking at the Ottawa School of Art in Canada. She has an eye for minute, intimate compositions that translate well between drawing, printmaking, and sculpture. Helmert is also an accomplished photographer. In 2001 she accompanied her late husband, Gerard Dolan, to Angola to shoot a documentary film for CARE called The Last Child: The Global Race to End Polio, where she shot a series of affecting portraits of the local citizenry, a practice she continued in other parts of the world.

But it is her assemblages which Helmert, after moving to Alpine in 2006, has focused on over the past four years. Her work, included in the group show Collective Memory that opens at the Mary Tomás Studio Gallery in Dallas on May 12, attests to the impact place has on Helmert’s work.

Helmert spoke by phone with Michael Abatemarco for A+C.

A+C: You’re adept at moving between mediums in your work. Is it difficult to go from one to the other?

Barbel Helmert: I always have expressed myself in different kinds of mediums and I like the challenge to do so. I came from the craft movement. I used to be a ceramic artist for the longest time. I also did stained glass, jewelry, and all sorts of things.

A+C: You’ve managed to maintain a strong vocabulary between different bodies of work — your Ranch Series of photographs, for instance, and your assemblages.

Barbel Helmert: My drawings, printmaking, assemblages, and sculptures all seem to have a common theme. For the Ranch Series I focused on detail shots of things I found. The assemblages are mainly found objects from my immediate surroundings. I have also incorporated some organic materials. They’re all in shadow boxes. I have great fun doing these. I made close to 160 pieces in the last four years.

A+C: These contrast most strongly with the portrait photography made while working on the film in Angola and India.

Barbel Helmert: My husband was a cinematographer and I was his camera assistant. I did some interviewing also. Whenever I had a chance I made my own photographs and I was really interested in the people, mainly children and women. Since my husband died in 2003, I have not done those kinds of portraits but I have done what I call detail shots.

A+C: What are some of the themes you find translate well to working in small-scale assemblage and closeup photography?

Barbel Helmert: What is most important to me in expressing myself is the juxtaposition of opposite forces as well as the attention to detail. Texture and composition are reappearing elements which characterize my work. I approach the execution of my work with spontaneity and immediacy. Whenever possible, I consciously and deliberately disregard planning and control in the creative process.

A+C: I notice that you don’t title your work.

Barbel Helmert: All of my works are deliberately not titled. The images are intended to engage the curiosity of the viewer and provoke responses and interpretations based on the viewer’s own experience. To me it’s not important that the viewer figures out where I’m coming from and why I made this piece. I find it more interesting to have a reaction from their own perspective.

Barbel Helmert: I do not sign my work in the front but, of course, they’re always signed in the back.

A+C: For a long time, you worked in drawing before moving to assemblage.

Barbel Helmert: I made a series of about 400 drawings. That was during a period of 10 years. I mainly had exhibitions in Europe — in Holland and in Germany. Now I only have a few left. Maybe, at one point, I’ll come back to it again.

A+C: I understand you’re moving to Albuquerque soon. Had you considered Santa Fe? It has a very strong art market.

Barbel Helmert: I just made arrangements to find a house as fast as possible It’s all very exciting and nerve-wracking at the same time. I was going to move to Santa Fe but it’s way too expensive.

A+C: Albuquerque has a great art scene, too. It doesn’t get as much attention as Santa Fe where there’s stuff happening all the time.

Barbel Helmert: I got a little taste of it when I was in Albuquerque before. I thought the contemporary art scene is quite interesting. It’s different than in Santa Fe. Since there is the rail line from Albuquerque to Santa Fe I will be coming out there to some of the openings and happenings.