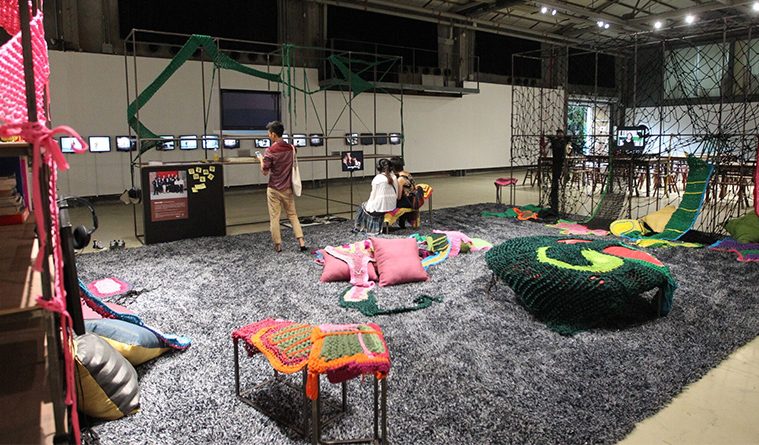 SHEILA PEPE invites SONDRA PERRY—Put me down Gently: A Cooler Place + I’m Afraid I Can’t Do That

Sheila Pepe, Research Station: For the People, 2014. We Have Never Participated: The 8th Shenzhen Sculpture Biennale, OCAT, Shenzhen, China, designed to include multiple functions, locally resourced readymades with handmade textiles within a steel structure.
Courtesy the artist and DiverseWorks. 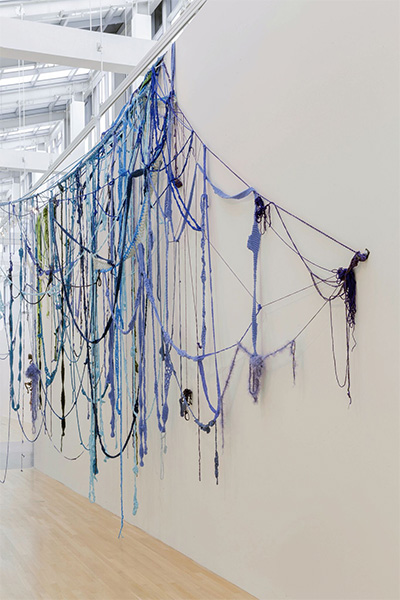 Sheila Pepe, Put me down Gently, 2015. Installation view at the Wexner Center for the Arts, Columbus, OH, January 30-April 5, 2015. Photo by Rick Lozier. Courtesy the artist and DiverseWorks.

“It’s very much like a drawing,” Sheila Pepe began. “Things are drawn, laid down, erased, moved. It’s all influenced by the architecture of the space.” The space Pepe refers to is the gallery that houses DiverseWorks exhibitions at MATCH in Houston. For its summer exhibition, DiverseWorks has commissioned a reiteration of Pepe’s Put me down Gently: A Cooler Place + I’m Afraid I Can’t Do That, on view through August 6, an installation originally commissioned for a 2014 exhibition at ICA Boston.

The installation consists of a vast crochet web that constructs a smaller room inside the gallery. The lines of fiber run across the gallery, up to the ceiling, attaching to walls and creating small pockets of immense comfort. “[The installation] is really pushing what would be thought of as decorative lines,” Pepe continued. The lines that she draws out of crocheted fiber drip down like running paint, turning the rooms into an abstract painting that the public can move through, sit in, or even crawl under.

Pepe often refers to her technique as “improvisational crochet,” looping and knotting fibers together and creating sprawling installations that react to the spaces she occupies. Born from this technique, her prior installations have grown from a personal space to become something monumental, often tying into high ceilings and archways or, in one instance, an elevator. Put me down Gently, however, is much less monumental. As she responds to the architecture of DiverseWorks, the installation moves back into that more personal space and tone.

“It’s an immersive environment tapping into the expectation of having something sculptural,” Pepe said. Put me down Gently could certainly be considered a sculptural installation. It consists of objects, some readymade, some handmade, but the space is functional—ready to be used—and the works can effortlessly shift into a more decorative mode. The installation serves as an open space for the community. “It’s maybe more like interior design,” she stated.

Pepe’s installation explores this confused space between art, design, commodity, and decoration, and then opens it up to the public as a fuzzy zone of high utility and environmental impact. Tables and chairs are set up, each area equipped with a power strip. “When we go into art spaces,” she explained, “we’re more aware of our environment, and it’s this awareness that I like.” Pepe has been using both feminist and craft traditions since the mid-1990s to explore a multitude of aspects, ranging from the perception of canonical artwork to the artist’s relationship to the institution. 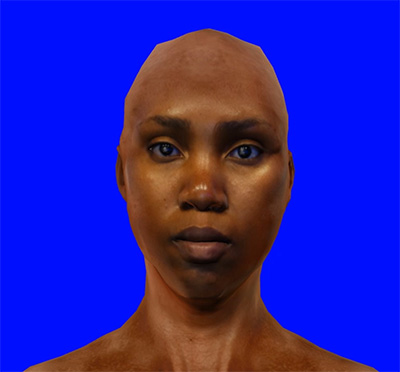 Crochet is a skill passed down from her mother, and while it carries forward the feminist aspect of her work, it also provides a counterweight to the scale of her abstract inventions. In recent years, her work expanded to her current investigation of public interactions with art and art spaces. “A new sprout shifts out from the main body, and I just kind of follow it,” she said. The sprout initially emerged from a desire to investigate what it means to take this idea, particularly the use of craft, pulled out from design and brought into a feminist strategy and attempt to push the medium back into its original function, holding on its formal aspects.

These efforts can be seen in the installation at DiverseWorks, where the objects are semi-ubiquitous but maintain a level of artistry or uniqueness. This push and pull is apparent throughout the gallery, but comes into play specifically as Pepe’s installation is interrupted by two blue screen videos created by CORE resident Sondra Perry. By presenting these works by Perry, Pepe disrupts the institutional frame of DiverseWorks and provides a separate platform from which to view works of art (a series of performances and gatherings hosted by Houston-based artists are planned throughout the run of the exhibition, including a variety of presentations by Perry and the annual launch of QFest in July).

“We first met in the summer of 2013 at Skowhegan,” Pepe explained. “I was a lecturer, and she was in residence, and we had a good connection, so when I heard that she was in Houston, I knew I wanted to invite her into the space.” Pepe and Perry, both of whom hold BFAs in Ceramics, share a number of interests. Both are deeply invested in social justice, a topic that united them when they shared time at the residency program. “It’s a special thing when you meet someone and think, ‘There’s never going to be a weird mix of [interests/backgrounds] that’s quite like this again,’ ” Pepe said, reflecting on their connection. “People with a craft background read and create art in a different way.”

When considering the connection, the craft, the fibers, the interruption of the installation feels vastly less disruptive. The colors in Perry’s videos tie into Pepe’s fibers, the glow of the projections providing an aura to the exhibition space. Pepe remained disconnected from Perry’s work, and although vague ground rules were established, she made no attempts to censor or curate Perry in any way.

Ultimately, Put me down Gently is Pepe’s vision for building a space in such a way that it shifts the art to the background and allows it to drip around visitors, taking on the role of decor and drawing dialogue to the foreground. Pepe has spent much of her artistic career utilizing craft as a means of actively pursuing this dialogue. Now, she uses it as an invitation for others to start a dialogue of their own.