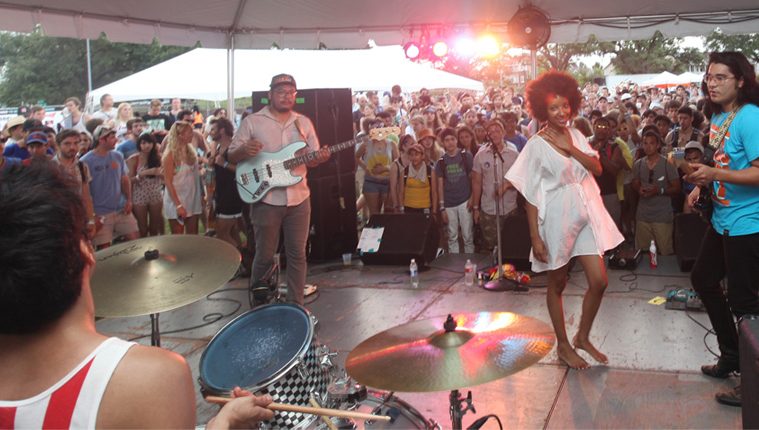 Willie Nelson at the Free Press Summer Fest 2012 in Houston.

The line at the East Gate of the Free Press Summer Fest 2012 (FPSF) is deceptively small as I arrive just in time to get my press credentials. I quickly pass through the entrance and make my way towards the main stage and immediately realize why the line is so sparse.

The crowd, whose two-day total numbers over 90,000 this year, is already in place. Willie Nelson is on the second song of his set. The smell of sweat on this sultry Sunday afternoon is almost as pungent as that of the pot everyone seems to be smoking. It is, after all, in the middle of that magic portion of the day between 4:20 and 5:00 and I soon realize why Willie’s set starts at the seemingly odd time of 4:50.

Although these days I am a classical DJ, I spent a big chunk of my youth hanging out with local bands. My college roommate played saxophone in the venerable Houston Ska band Los Skarnales during their heyday in the late 90’s, and through him, I got to know a lot of local music and musicians. However, as I discovered at FPSF 2012, it’s been a while since I trafficked in anything other than Bach and Beethoven.

Started in 2009 to highlight the perpetually underestimated Houston music scene, FPSF began big and has grown exponentially bigger. With 8 stages and well over one hundred acts to take in, it would have been easy to camp out for two days and relive the lost decade of my 20’s. Unfortunately, Sunday evening was all I could squeeze in this year so I make the most of it, which with headliners like, Willie Nelson, Primus and The Descendants is easy to do.

At 79 years old, Willie Nelson is an experience unto himself. Having the opportunity to stand 10 feet away from him and his faithful guitar “Trigger” is something I will cherish. The juxtaposition of Willie’s leathery voice and skin against a back drop of screaming fans who, in many cases, are young enough to be his great grandchildren, is surreal and perhaps uniquely Texan in nature. His vocals are clearly that of someone who has spent the last half century singing and smoking, but he is an artist who transcends any technical concern. He is Willie and he charms his fans through a set that includes icons like “Mammas Don’t Let Your Babies Grow Up to Be Cowboys” and “Georgia on My Mind.” The crowd went especially wild for “Roll Me Up and Smoke Me When I Die” and “I Gotta Get Drunk.”

Although I went to the festival specifically to experience first-hand artists like Nelson or Les Claypool from Primus, both of whom anyone who dares to call themselves a music aficionado must see, the act that I was most struck by during my short time there was a quartet of Houstonians known as The Tontons.

They’ve been together since 2008, but the rumor is that they have stepped up their game over the past couple of years. Whatever the case, I had never heard them before they showed up on Stage 7 at FPSF. These guys are so “Houston” in every way I couldn’t help but smile as I listened. At first glance singer Asli Omar doesn’t seem like she belongs in this indie-rock outfit who’s influences include everything from Led Zepplin to doom metal, but her soulful voice and exotic yet approachable presence is entrancing and she is the perfect contrast to the heavy handed psychedelic guitar of Adam Martinez, the grumbling bass of Tom Nguyen and the super tight drumming of Justin Martinez (Adam’s brother). With several tours and major festival appearances already under their belt, this band is to be watched closely.

For as long as anyone can remember, the Houston music scene has been bemoaned. It’s not for lack of talent either. The sprawling zone-free geography of the Bayou City is an issue for anyone looking to cultivate a “scene” and audiences and musicians have either had to love it or leave it. Many leave for the greener musical pastures of places like Manhattan or Los Angeles, and those who love it and stay inevitably become martyrs for a city whose cultural life has only exploded in the past 30 years and continues to be under appreciated elsewhere in the country. Free Press Summer Fest makes one forget all of that and offers two-days where music reigns supreme and fans come together for the love of it all. One can only wait until next summer.