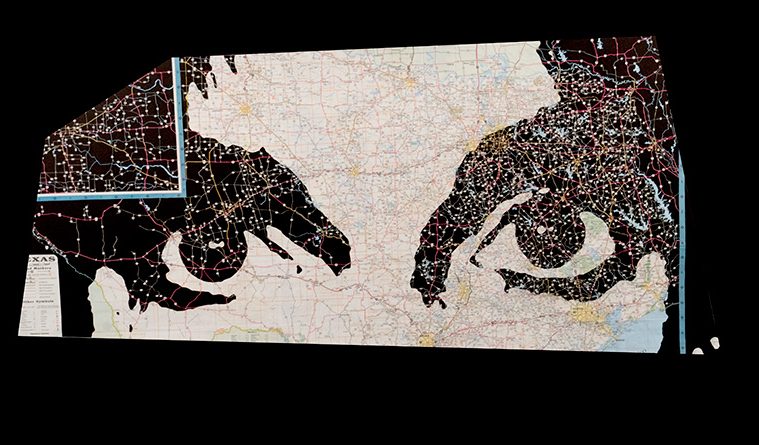 The Scene – Detail (Naomi Sims, 1981).
Based on a photograph in This Week in Texas (TWT) archived by GCAM – Gulf Coast.
Archive and Museum of GLBT History
Photo Credit: Nick Vaughan. 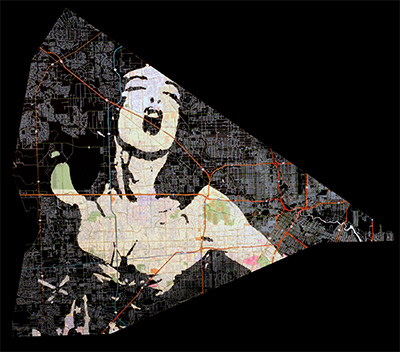 Charles Frenchy Vosbaugh lived in Trinidad, Colorado in the 1880s.   His final days were spent in a Catholic hospital, where the nuns found that Charles had been born Katherine and had been living as a man for 60 years. His story hit the newspapers, many with contradicting stories and no documentation to support them. “The news accounts were so contradictory that we began to wonder whether Charles was just making [stuff] up to tell reporters,” said artist Jake Margolin.

“We found Charles’s death certificate in the Trinidad municipal library, and the Catholic cemetery had a ledger with his death records,” added Nick Vaughan. “Under gender it says that Katherine Vosbaugh was ‘woman…man!!!’ ” As they kept digging, they came to their real breakthrough, a record of Emma Vosbaugh having bought a house at a time aligned with some stories. From there, research assistants at the Missouri State Archives found a record of the marriage between Charles Vosbaugh and Emma Miller. The documentation the artists helped to uncover corroborated some of the most sensational aspects of Vosbaugh’s narrative.

Vaughan and Margolin often speak humbly about the depth of research that goes into their work. The two are married interdisciplinary artists who pull from backgrounds in the visual and performing arts (theatrical design for Nick, drama for Jake) to draw lines between LGBTQ histories in the U.S. and contemporary queer experiences. Their work has been shown at Art League Houston and Devin Borden Gallery, as well as spaces in New York City, Chicago, and Pittsburgh, PA.

“We are absolutely not historians,” Vaughan stated. “We are amateur sleuths.” True as this might be, the two artists have dedicated their recent years to cultural research in a series they’ve titled 50 States. State by state, they delve into the Queer history of the United States, and they do not take their impact lightly. 50 States: TEXAS will be shown as part of FotoFest/HCP‘s re/thinking photography Conceptual Photography from Texas, Oct. 20 through Nov. 25.

The social nature of their collective practice involves entering communities, taking in-depth looks at both community and individual histories. As any artist working in a new community should, they enter with no preconceptions and remain open to being guided by local leaders. 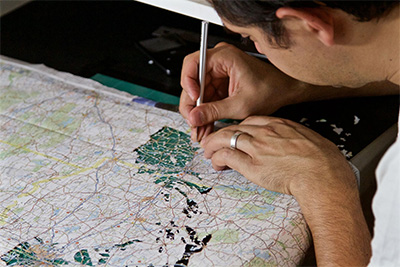 “We mostly know how little we know and think of our travels and our work as educating ourselves,” Margolin said. “We figured out real early on that the most important thing for us is to be spending as much time physically in each place we are making work about, and as much time with people who actually live there as possible.” He added that every community is the center of its own universe. Each one has a history as complex and contested as every other community, and an aspect of their work is sorting through the intricate relationships, lore, and accounts that come with such complexity.

Of course, the artists hit the books as well, digging for narratives that may have been buried by history. “In addition to meeting with local members of the queer community wherever we go and just asking them what we should looking into, we spend as much time as we can in University libraries or Historical Societies, just striking out blindly, using the library’s catalogue to find anything we can,” Vaughan cited. “This often leads to academic articles, which tend to have exceedingly useful bibliographies and then we read everything in those bibliographies that we can get our hands on—six degrees of academic journals.”

The results of their research, the narratives they gather, and the archives they dig up, take on forms as wondrous as they are labor intensive. From graphite shavings shaped into text and image to interpretations of architectural visions that never came to fruition, Margolin and Vaughan tow the line between archive and art. One style, though, appears prevalent throughout each part of the 50 States project: cut maps.

“The cut maps really came out of discussions we were having about geography and sense-of-place, and the influence that both had on our identities,” Vaughan said. “At some point, we made the link between maps with their roadways and waterways, these vast transportation networks, to the vascular and nervous systems within our own bodies and started figuring out how to tease that out.”

The artists excise the land from the maps, leaving behind only the arterial lacework created by roads and waterways. The result highlights the visceral connections to the places we live—the places that, in part, define who we are as individuals and communities.

“The first map we did was of California, where I’m from,” Margolin recalled. “We cut out the land in the entire map, which was about the size of me, and displayed it in the middle of space with me standing behind it.”

He stated that the viewer could see the arteries of his home state superimposed across his body. From there, the artists began laying imagery into the maps. The images were reflective of their interests and the research they undertook, beginning with icons of masculinity from the American West and growing to include queered suburban graphics and vintage erotica. As the work developed and their research expanded, Margolin and Vaughan realized that they could use these visual representations to weave lesser-known stories into the historical tissue of the broader culture. These take form when, for example, they introduce local communities to the ruins of rural sheep camp in Colorado, home to a transgender man in the 1880s, or a bridge over the North Platte River in Wyoming, where a band of gay men traveled nearly 170 years ago.

“It feels like we’re making an accumulating series of medical slides of the un-dissected Queer American body,” Margolin said.

The latest of these slides will be on view in The Scene: (Houston 1969-1981) Oct. 10 through Nov. 13 at the Wedge Space on the Southeast campus of Houston Community College. The exhibition will consist of cut maps featuring images from that era, showcasing the diverse and thriving drag scene in the time between the Stonewall Riots that launched the modern LGBTQ rights movement and the beginning of the AIDS crisis.

The two will also give a 60-minute performative artist talk, with video, titled Yes Queen, Yes: Views of the Houston Drag Scene from Stonewall to the Onset of the AIDS Crisis As Told By Two Outsiders, which incorporates interviews with Houston LGBTQ elders.

Drawing on their combined experiences in theatre, the talk seems to bring their work full circle. They explain that it, “explores the role of outsiders in interpreting LGBTQ histories, the role of the artist in engaging with cultures other than their own, and triple pillars of fabulousness, violence, and visibility with which the drag community has supported the broader LGBTQ community for decades.”