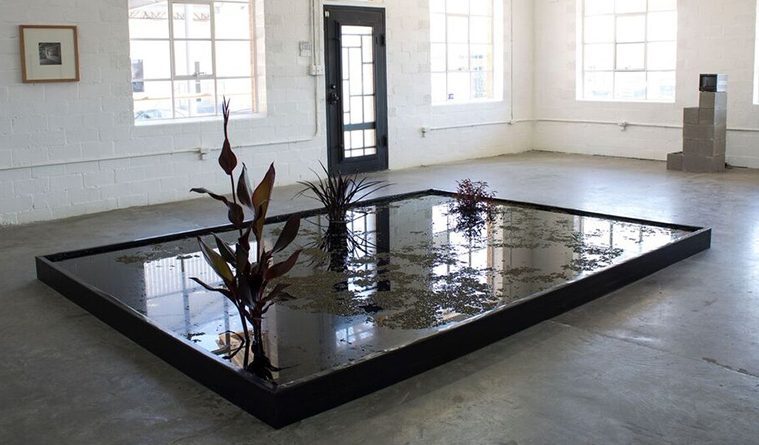 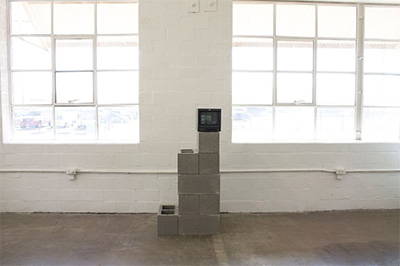 The central dilemma of art-making in the second decade of the 21st century continues to revolve around the conflict between ideas and objects; how to maintain the object-ness of art in an era in which the object can no longer claim primacy.

The Mexico-based artist Oscar Berglund, like many of his contemporaries, utilizes his practice to explore that clash, and in Somewhere in Between, on view at Cydonia through March 19, he wrestles with process, both artistic and natural, exploring various methods of capturing his own processes as well as those of the natural world inside objects and inside the gallery while offering a subtle commentary on our relationship with nature.

The focal point of the small, contemplative exhibition is a man-made pond, complete with water and “aquatic flora,” in Berglund’s most obvious nod towards a blurring of the lines between man and nature. The piece is at once hypnotizing and confusing, the obvious disconnect between such an object’s presence inside the gallery space as well as the water’s reflection of the surrounding architecture force a reconsideration of the often false division we construct between ourselves and our surroundings; we are all, after all, a part of everything else.

The boundary between the constructed world and nature is also present in a video work and several photographs that grace the walls, in which Berglund has photographically captured images of an abandoned, decrepit home as nature begins to stake its claim.

The remainder of the show consists of two series of canvases. In one, Berglund has allowed various natural processes such as mold, rust, and mildew to seep through framed canvases, so what viewers encounter as art is nature’s decay, stained by Berglund into an artificial finality; a tenuous assertion of man’s power over nature. In the second series, Berglund has created a similar series of mold-infested canvases—only this time, the painter has made his mark in an ascending and descending, dependent upon your vantage point, gray gradient. 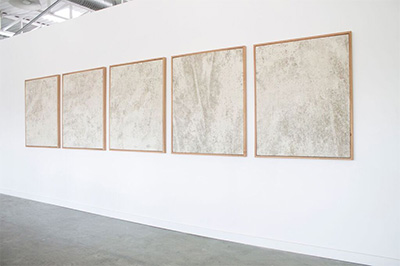 The work is about the entropy of the natural world; it’s about our fragile relationship with that world, and it’s a tender critique of man’s efforts to assert himself upon it. The live pond and live fungus on the canvas serve as tacit reminders, alongside the rather lovely photographs and video work, that whatever we do, we do it with the materials nature itself has offered up for us, and it is inevitable that, eventually, these works too will return from whence they came.

Berglund’s work is also, in its overt use of nature and our relationship with it as subject matter, an unusually poignant evocation of the difficulty contemporary artists and their audiences have in synthesizing massive ideas into marketable, contained art objects. What does the work communicate to you? Is it what the artist intended? Or does the art object seem too small to convey the heavy conceptual weight with which it is imbued?

Just as man cannot stop or contain the entropy of nature, artists in the 21st century are perpetually grappling with what it looks like, or if it’s possible, to contain an idea in art’s restrictive reliance on the object.