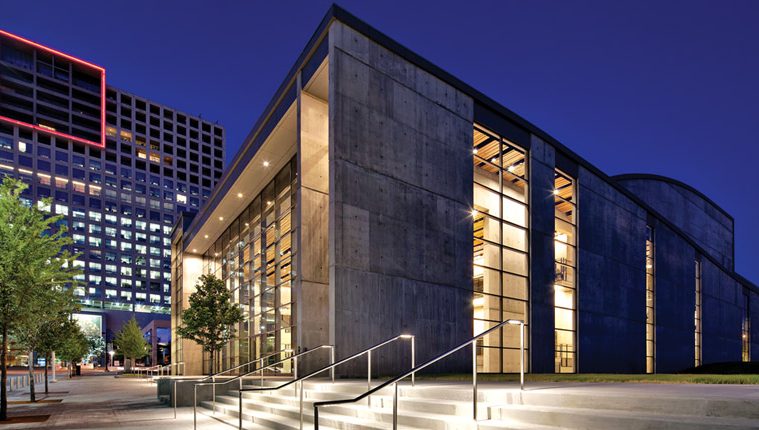 Spec’ing Out a Theater

The Dallas City Performance Hall will open in the Dallas Arts District on September 13.

Dallas City Performance Hall is a 750 seat multi-disciplinary theater that has the ability to become whatever it needs to be on any given night. It can be a symphony hall for a large orchestra or for a chamber group. It can be a wide open stage for dance troupes or an intimate space for a theater company. It can be a lecture hall, medical movie house, or even the site of a dinner party. It can be all these things because the advanced technical systems of the hall have been designed with versatility in mind, shifting the space seamlessly from event to event, user to user, performance to performance, with ease.

I was first introduced to the building when, as part of my work in the technical team of the Office of Cultural Affairs, I was asked to “spec out” the facility — a process of creating a detailed packet of technical specifications about a performance venue that contains information such as the stage dimensions, lighting inventories, seat counts, etc. for use by the facility management and user groups. During my first tour, I was amazed by the size of the space. Compared to similar sized theaters with 500-1000 seats, the stage itself is immense. Large stages are ideal for big symphonies and dance companies and I can’t think of a single local group that this stage wouldn’t be able to accommodate. But that size doesn’t exist at the expense of intimacy. With the use of two large white oak panels, the proscenium opening can be reduced for theater companies or a lecture, which would be dwarfed by the full stage opening. Unlike traditional curtains, which are typically used to reduce the size of a stage, the white oak panels tie in with the rest of the architecture, giving a sense of permanency, despite their ability to easily slide offstage and disappear from view when not needed.

The theatrical rigging or “fly” system is an equally versatile element of the theater’s operating design. A hybrid of an old-school manual system with modern motorized technology, our fly system is used every day with every performance, allowing groups to stage spectacular special effects, like those required in a play like Peter Pan, as well as more mundane tasks like easily focusing lights or lowering them in the Hall’s orchestra shell. In a majority of theaters, every curtain, backdrop, and lighting instrument is hung on a pipe that can fly (move up and down). At Dallas City Performance Hall motorized lines are dedicated to the purposes of lighting instruments, the orchestra shell, and the white oak portal – the really heavy stuff – and we have over 30 manual lines intended for curtains, backdrops, scenery, and the occasional actor. Even if an audience never sees a curtain or a piece of scenery move, the fly system is still a crucial element to the daily operation of the stage and the system here utilizes the most efficient technologies available to ensure that groups using the hall are able to achieve the desired stage picture with ease.

Inside the Dallas City Performance Hall.

Versatility isn’t limited to those things you can see. I often have to get signal (video, audio, or electricity) from one location to another. Perhaps a conductor needs a camera in the orchestra pit that can be viewed by someone in a dressing room. Maybe an actor onstage needs to be able to press play on a CD for a specific sound effect. There are input/output panels located throughout the building – around the stage, the orchestra pit, the lobby, and even under some of the seats in the house. All of these panels route to a central control or “patch” bay, where the technical staff can quickly connect point A to point B – regardless of where those points are located. User groups no longer have to devote time and labor costs to running cable all over the building, knowing that our team can ensure that they will have the signal they need where they need it.

The technical aspects of a show are only as good as their operators. In this venue, the light booth is ideally located at the back of the house on the orchestra level – giving the booth operator a similar viewing angle as the majority of the audience. The position of the open-air sound mixing booth is also located behind the audience, allowing the sound operator to hear precisely what the audience is hearing (as opposed to listening through headphones), resulting in a more accurate mix that reflects exactly what is being performed on stage.

It has been a thrill to be in the building this past year, seeing each system go through testing and implementation as I put together the hall’s tech specs. But these systems, like the hall itself, are just a tool to be used by the creative minds of our arts organizations. In just a few short weeks, all the forethought, planning and hard work that has gone into the technical systems will pay off, and I, for one, look forward to seeing how this tool gets used by our local performers night after night.

-ROB CRANE
Rob Crane serves as the technical director for the Dallas City Performance Hall which opens in the Dallas Arts District on September 13.