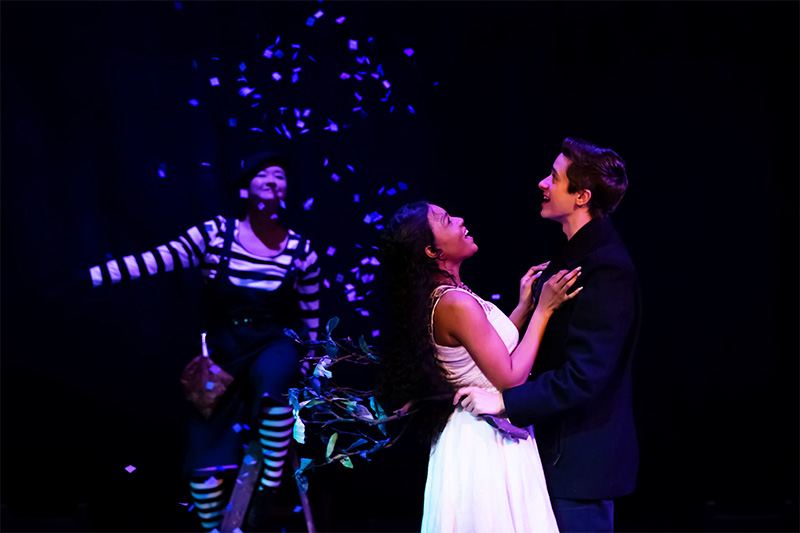 Staring into the Theater Infinity: ‘The Fantasticks’ at Stages

Somewhere near the end of the first act of Stages’ sweet and nostalgic production of the classic musical The Fantasticks when a happy ending tableau had arrived but an entire second act still remained to follow, I couldn’t stop thinking of that likely-apocryphal story about the cosmologist confronting a turtle infinity. The show is a first ever partnership with Aperio and runs through March 15.

You know the one: some learned astronomer gives a lecture on the nature of the universe only to be interrupted by a devout testudines theologian who insists that not only does the Earth rest on the back of a tortoise, on the back of another tortoise but it’s turtles all the way down. Not having seen the Fantasticks before, and with only a general knowledge of the story, I found myself feeling a whirl of vertigo looking into this musical infinitude that is theater all the way down.

Created in the early 1960s, this Tom Jones and Harvey Schmidt show soon became a musical phenomenon with a 42 years Off-Broadway run. This Stages production begins with the entrance of a mime (Lindsay Longacre) followed closely by the rest of her acting troupe, led by a regally dramatic narrator (Nkrumah Gatling)–dressed a bit like a circus ringmaster if played by a rooster matador. The Fantasticks, and especially this revival directed by Stages’ A.D Kenn McLaughlin, never plays coy that this is a musical about theater-making and story about the power of storytelling.

Setting the evocative mood with the show’s most iconic song “Try to Remember,” our Narrator takes us into the play, one depicting innocent love forged into something stronger by real world hardships, within this larger musical about playmaking. The young actors, taking on the roles of young actors in the troupe, dance with a breeze into their parts: Girl and Boy (Kiaya Scott and Tyler Hecht, both believable and lovely in their dewy-eyed earnestness). Meanwhile, the somewhat older actors jump into the comic roles of their feuding but really BFF fathers (the very fun LaBraska Washington and Luke Longacre).

But wait there’s several more theater (turtle) layers to go just in the first act, when some plot complications require the actors pretending to be dads pretending to feud decide to hire the player villain El Gallo (the Narrator), in order to stage a fake abduction of the Girl/daughter/Luisa. The kidnapping will supposedly drive the couple even further together as the girl becomes the princess/prize to be rescued and the Boy/Matt becomes a hero. El Gallo then has to subcontract the freelancing acting duo, Old Actor/Henry (Paul Hope in a career culminating role) and the Man Who Dies/Mortimer (Ronnie Blaine) for the parts of bumbling henchmen in the kidnapping.

The Fantasticks maintains a precarious balance of self-referencing, of theater atop theater atop another level of theater, so much so it becomes almost dizzying to look upon. Yet McLaughlin, the cast and creative crew manage to keep the exponentially meta story aloft with a comic and musical lightness even when the message proclaiming the loss of innocence leads to a wiser, deeper love gets a bit heavy.

As layered as the performances are all round, especially a bravado-filled yet nuanced Narrator/Gallo from Gatling, it’s Hope and Blaine who do much of the comic weightlifting when the allegory gets a bit too maudlin. McLaughlin adds several more theater turtle to the tower with the casting of Hope, a musical and Shakespearean elder statesman of the Houston stage community to play the time-worn but still kicking it Henry. McLaughlin sets Hope loose to do his thing and he uplifts and commands every scene he’s in. Yet, Blaine with his death-defying death scenes manages to pickpocket several moments from even Hope.

Another meta-level lies with the placement of The Fantasticks in the season as the first production to debut in Stages’ new Gordy facility. The Sterling Stage already feels like a 21st century high tech take on a classic thrust stage architecture. Costume (Kristina Hanssen), scenic (Laura Fine-Hawkes) and lighting (Renee Brode) designers all work to echo that ancient theater spirit moving through a contemporary space. It takes real artistry to create a design that looks stitched together on the fly by a troupe of rambling players, players who know now more than ever we still need imagination magicians who can create whole realities with a bit of rope, stretches of fabric, and wooden swords.

And finally with Aperio in charge of the band, which included the fabulous Aperio A. D. Michael Zuraw on piano, the upgrade proved complete.

If you’re an atheist to the church of All the World’s a Stage and prefer theater that doesn’t openly wink at its audience, the artful and comic artifice of The Fantasticks will likely not convert you. But if you’re willing to stare into a theater infinity that goes all the way down, Stages has a fantastical song for you.