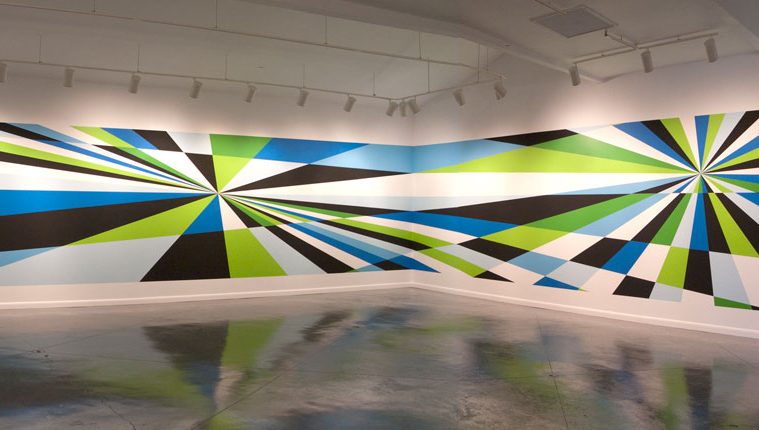 Taking a Bow and Sharing the Stage

A confluence of fortune has brought together two related painting exhibitions this fall: the 2012 Texas Artist of the Year exhibition at Art League Houston, viagra 60mg FLYAWAY: New Work by Aaron Parazette, and the Parazette-organized In Plain Sight at McClain Gallery. The Art League prize recognizes – and the McClain exhibition makes clear – what Bill Davenport, in his essay for the FLYAWAY catalogue, calls Parazette’s “centrality to the Texas art scene.”

With forty paintings, all by Houston-based artists, all but two made in the last two years, In Plain Sight presents a selection of the local painting scene. In his forward to the catalogue as well as in person, Parazette defines himself as the show’s organizer, rather than its curator: a distinction due to his role in choosing the artists to be exhibited but not the objects, a decision he left up to each participant. To further muzzle his curatorial voice, Parazette hung his contribution to the exhibition on the title wall, a painterly answer to the curator’s didactic panel. While eschewing a thematic installation and presenting a range of painterly practices, Parazette hewed to what he terms “conventional painting” as opposed to a more elastic idea of the medium.

Of course, In Plain Sight begs to be compared to the Museum of Fine Arts, Houston’s major 1985 survey, Fresh Paint: the Houston School. With such a loose curatorial grip, Parazette sidesteps the criticisms engendered by Fresh Paint—namely the earlier exhibition’s claim of a specific Houston school, style, or approach to painting. Any attempt to corral today’s practices under a certain brand would close the door on Parazette’s assertion that “the show’s implicit proposition [is] to cultivate an ongoing conversation.” Parazette does not endeavor to present an argument, but rather, the beginning of a sentence.

As such, there are works that take a distinct approach unmatched elsewhere in the exhibition: wily objects that I just cannot round up under a larger thematic umbrella. For instance, Mark Flood’s luscious lace painting The Thing, made by using lace as both a stencil and a stamp; while he shares Kent Dorn’s emphasis on tactility and Tierney Malone’s use of low materials as well as the high-keyed color palette found throughout the exhibition, Flood does not fit into a clean rubric. Likewise, Gail Stack’s cobalt palimpsest of gestural traces is a singular work; moreover, as a Fresh Paint veteran, Stack is an important inclusion and a testament to the stamina of the Houston scene.

At the same time, there are threads, whether aesthetic, social, or philosophical, which recur throughout the exhibition. While not spelled out in the installation, one comes away with a sense of certain commonalities. The majority of the works on view are not just abstract but highly reductive in nature, and can be broken down into canvases that are taped (HJ Bott, Jonathan Leach, Parazette, Susie Rosmarin) and shaped (Melanie Crader, Jeremy DePrez, Christian Eckart, Myke Venable). In contrast to the hard-edged painters, In Plain Sight features a number of gestural (Brian Portman, Howard Sherman) and post-painterly abstractionists (Joseph Cohen, Alika Herreshoff).

Among the figurative canvases, the tendency tends to be more discursive, paintings about painting, language, representation, or communication (Davenport, Dorn, Francesca Fuchs, Malone). The portrait room also points to social connections; all artists are graduates of the University of Houston, where Parazette teaches: Seth Alverson, Emily McGrew, Cheyanne Ramos, and Hana Shoup. This room demonstrates Davenport statement from the Art League catalogue: “Aaron has a lot of points of contact with the art world beyond his work.”

Which brings us back to Parazette’s FLYAWAY at Art League, an exhibition of work all made within the last eight months.  The six shaped canvases—oblong, truncated, asymmetrical but never amorphous—chart Parazette’s latest developments in the Color Key series. As Parazette explains, the idea was to create “a painting support that was visually insistent because of its uncommon shape, and then to paint something on the support that was visually insistent in its own right.”

The centerpiece of FLYAWAY is a titular wall painting. And it is not to be missed. Bisected by a corner and spanning two walls, FLYAWAY measures fifty-six feet in length. It does not inhabit the full wall, stopping before the floor, ceiling, and lateral corners. Yet it is absolutely engulfing; the radiating forms pull the viewer into the painting’s perspectival vortices. Conceived a week and a half before painted and executed in a cool palette of green, blue, white and black, it grows out of Parazette’s most recent suite of color key paintings (Color Key 39, on the opposite wall, is derived from the same working drawing). Just at eye level, a horizon line runs across the entire length of the wall painting. On the left side, the horizon line runs through the left vanishing point while on the right, the vanishing point converges a few inches higher, producing what Parazette calls “irrational geometry.”

Together, FLYAWAY and In Plain Sight speak to the robust vitality of artistic activity in Houston. For Parazette, In Plain Sight is intended as a wake-up call to what’s happening all around us every day. And it’s an important call to heed. Perhaps the next round-up will go beyond the canvas and include a multitude of artistic approaches.