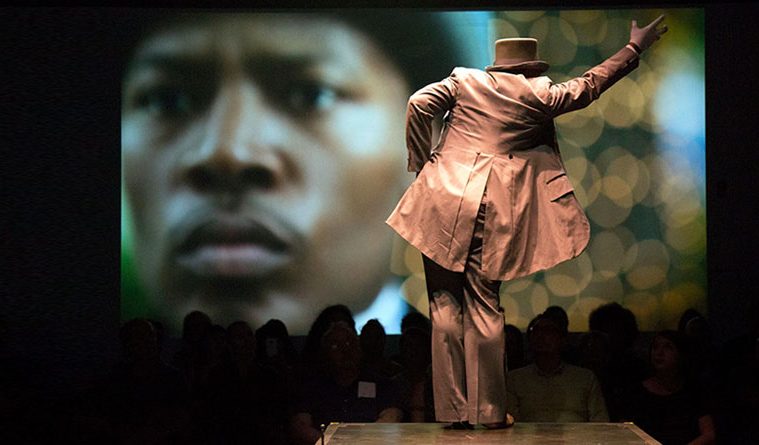 Ten Not So Tiny Dances at CounterCurrent 2016

Harrison Guy in Mr. Invisible as part of CounterCurrent’s Ten Tiny Dances at The Match.
Photos by dabfoto creative for University of Houston Cynthia Woods Mitchell Center for the Arts. 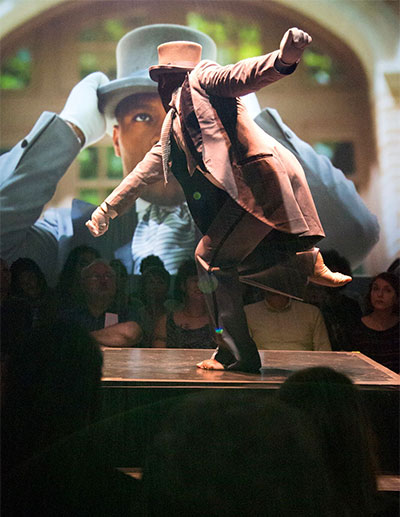 The University of Houston Cynthia Woods Mitchell Center opened its third CounterCurrents with Ten Tiny Dances on April 12, 2016.   It couldn’t have been more different than last year, which closed the festival. Trading a casual white picnic tent in the 13 Celsius parking lot with a chatty audience sipping mimosas for the sleek Matchbox 1, Ten Tiny felt completely reconfigured, including the narrow parameters of the event, which includes a 16 sq. ft. performance stage. Give arts folks a restriction and they will look for a way around it, which is what happened in this iteration of TTD, as each piece also included a video component, offering a myriad of ways to contain/expand/collapse/distract/engage with what was happening on stage.

Curated by the Mitchell Center’s Pia Agrawal and Rachel Cook of DiverseWorks, and co-presented with DiverseWorks, TTD made for a great CounterCurrent kickoff, and one of the few traditional indoor theater experiences. And don’t let word “dance” in the title fool you, TTD is an inclusive forum, open to theater, performance and visual artists.

Founded by Mike Barber in Portland, Oregon in 2002, TTD serves as a festival energizer of sorts. It gives audiences a chance to meet some of the artists who are doing major works at the festival, an opportunity for those involved in those projects to strut their own stuff, and for local artists do join in the mix. It moves in two directions, pointing to the festival programming and the artistic climate of the festival’s home city.

In keeping with not exactly keeping with the rules (in the expansive use of space through video), here are some ramblings on the ten tiny dances. 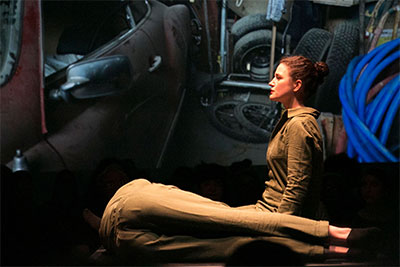 Harrison Guy, co-founder of Urban Souls Dance Company, is a powerful presence on any stage, regardless of its size. His restrained persona in Mr. Invisible dominated the room. Video by Marc Furi, elegantly amplified Guy’s noble performance, creating an all encompassing atmosphere. Guy chose his movements carefully, knowing full well that sometimes standing still clad in formal attire with a bell beside you can be enough. I wondered if the piece is the beginning of a larger work, and if it isn’t, it should be. A fluid relationship between image and movement, both rather minimal, made this the standout piece of the evening. He was anything but invisible.

Earlier that same evening I had the privilege of being one of the first jumpers in Hillerbrand + Magsamen’s Home Balance, a bouncy house complete with projected videos that traveled around to various locations during the course of the CounterCurrent week. Home Balance: Together, Alone, choreographed by Hillerbrand + Magsamen (who also did the video), Gillian Bowen, Josh Egula, Ariel Montemayor and Thu-Mai Nguyen, served as a clever companion piece to the installation. If you didn’t bounce before you wanted to bounce afterward. 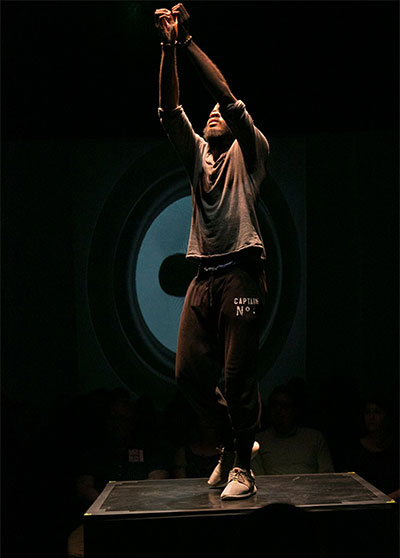 Also pointing to the festival was Nobody dances sober, performed by Zoukak Theater Company founder Maya Zbib and Omar Abi Azar. There is where TTD can be like a tasting menu. Zoukak worked with University of Houston students for performances of Innocent Violence and their short play with encroaching visuals by Maya Chami served to arouse curiosity about what they might do next.

I ran to TTD from gawking at an abandoned red broken down 1985 Nissan Pulsar NX on Main Street, strewn with paper, as part of Anthony Hawley’s sequential auto/street drama Fault Diagnosis, so I was happy to get another clue as to how Hawley operates in Birdless: Lost Things, stoically performed by Brittany Coudriet and Rebecca Fisher. Hard not to love all the mystery surrounding this project. Here the video acted as a compressive force, containing the precise architectural gestures of the dancers.

For Annie Arnoult’s Bus Stop, my attention moved away from her dancing and the platform, and to the video of various favorite Houston dancers at Bus and Metro stops, proving once again, it’s hard to compete with giant visual images. Teresa Chapman’s Remains had the opposite effect, pointing me to the tiny stage and Josh Eguina and Gaby Luna’s effective dancing, who managed some mighty complicated choreography on that small stage. There was little separation between movement and image in Jamie Nicole Fruge’s immersive Movement: Isolation performed by Victoria Woods. Joel Rivera and Jarell Rochelle’s poignant tribute to Houston’s slain dancer Jehlan Vaughn, powerfully performed by Rochelle, used only a pulsing speaker to accompany this emotion-driven piece. Watching Abijan Johnson and Lovie Olivia‘s tight connection and studied partnering in their untitled work made the video component mostly irrelevant. 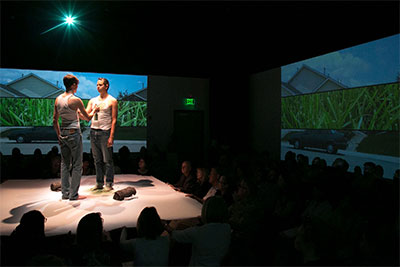 As I mentioned earlier, TTD platform can also serve to highlight artists who are in the Houston air in a big way right now, and such is the case for Nick Vaughan and Jake Margolin, who have recently wrapped up two outstanding exhibitions: 50 States: Wyoming at Art League Houston, and Where the Ranch Actually Was at Devin Borden Gallery. Their contribution, Waterglen, Colorado, was anything but tiny. Cleverly expanding the space by having audience members hold a white tarp to extend the stage space, Vaughan and Margolin evoked a ritual of union, set to the archived audio recording of oral arguments from the supreme court case Obergefell v. Hodges, surrounded by a triptych of sky, white suburban homes, grass and cars. There’s a studied elegance to everything this couple does, and this piece served as a reminder that a lot can happen in five minutes or less.