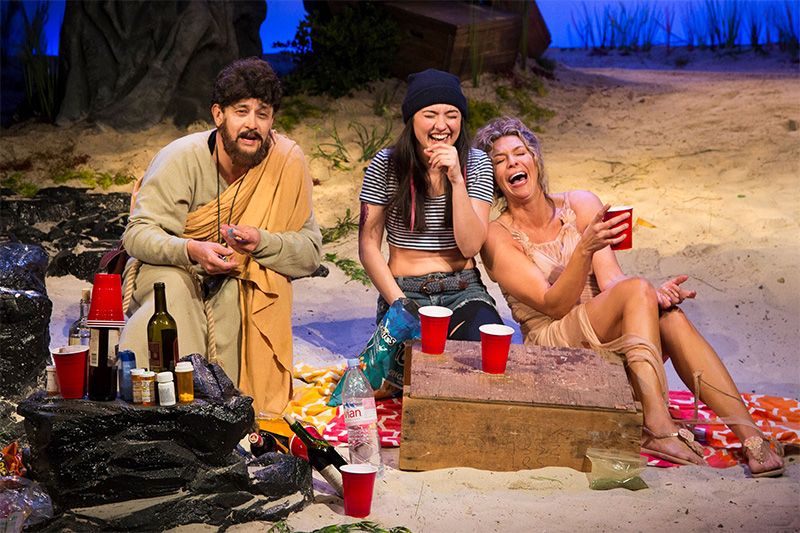 Houston playwright Brendan Bourque-Sheil describes his journey to his current situation as a rollercoaster with many trips to “the deep end.” To me it sounds more like the deliberate push of a focused and talented writer, with a few lucky breaks along the way—but what story doesn’t have those?

Bourque-Sheil was born in Oakland, CA, but was settled in the north Houston suburb of The Woodlands by the age of five. He started out as a musician and by 13 was playing in the orchestra pit of the Crighton Community Theatre. In middle school Bourque-Sheil found himself in a theater class taught by a person he describes as a talented actor and director who was an inexperienced theater educator. Instead of taking them through dramatic structures and genres or providing some age-appropriate examples to learn from, this teacher split the class into groups, gave them a deadline, and instructed them to have a play to show at the end. This tossed Bourque-Sheil into his first deep end and turned into an early class on scriptwriting, devised theater, and all-out production.

The final fateful childhood experience he relates took place in the summer before entering high school. He signed up for the Stages Repertory Theatre camp at age 14. Stages Artistic Director Kenn McLaughlin ran the program himself.

“Kenn walked in on day one like ‘Okay Fellow Artists, let’s make the most important play that’s ever existed, but first, let’s do trust falls off this ladder.’ Everything was always that exciting and important to him. We constantly hear stuff like ‘everyone’s voice matters,’ but he really made that belief manifest in a way that no one had before. He made art feel like an urgent matter.”

The way that McLaughlin treated the young students, as if they weren’t out of their depth working on plays like Angels in America, Death of a Salesman, and Hamlet, had a lasting influence and the experience itself would later pay dividends.

Despite these early proclivities, Bourque-Sheil couldn’t bring himself to get involved with either his high school or college theater programs. Once he began attending Texas State University, he was still writing on his own and pursuing a music degree. He made a web series called Things I Said in Therapy and kept up his prose writing through his blog. Bourque-Sheil never once participated or wrote anything for Texas State’s own theatrical community, but did participate in another college’s annual 10-minute play festival. Maybe this willingness to participate in another community rather than his own is something he discussed on his webseries, but sadly we’ll never know as it is lost to the erosive tides of the internet.

He did figure out that he preferred writing to music and graduated with an English degree in 2012. He moved back home to the Woodlands and began to sort out what to do next. While he odd-jobbed, Bourque-Sheil kept up his blog, participated in a Moth story slam, got involved with 90.1’s So What’s Your Story radio show and the monthly reading series Grown-up Storytime.

“Before I started writing for those shows, whenever I imagined my audience, I had this incredibly outdated picture in my mind of stereotypical theater-goers, and consequently, a lot of my writing sounded like a really bad impression of Edward Albee. Having a real live audience full of people who don’t see plays forced me to drop that pretense and engage with the present. Plus, I had to write new stuff month after month, which forced me to stop writing about the same three things.”

With his family on the cusp of enacting a career intervention, Bourque-Sheil finished his first full length play, Book of Maggie. He sent it to the “script submissions” inbox at Stages Theatre. Who checked this inbox? Was it McLaughlin himself? Would he remember Brendan from theatre camp almost 10 years ago?

He did. McLaughlin himself responded to Bourque-Sheil’s email and set up a staged reading of Book of Maggie. Bourque-Sheil felt thrown into the deep end once again.

“The cast of that first reading was a real who’s who of Houston theater—you could’ve picked a random line from any one of their resumes and it would’ve been more impressive than the entirety of mine —but they laughed a lot, which cut through the Imposter Syndrome. If the play hadn’t gone any further than that reading, it still would’ve been incredibly validating.”

McLaughlin committed to producing a full production of Book of Maggie right then and there, which went up in January 2016. Book of Maggie is a dark comedy following the two famous biblical figures Judas Iscariot and Pontius Pilate. They are whiling away their immortal afterlives when they’re given the chance to redeem themselves by staging divine interventions with two mortals. But they quickly learn that their task is not as straightforward as they thought, and there seems to be some kind of larger cosmic scheme in the works that once again puts them on the losing end of destiny. The production received mixed reviews but represented a huge milestone in Bourque-Sheil’s life. In 2018, Chicago’s Death and Pretzels Theatre Company mounted its own production of Book of Maggie.

One of the actors in Book of Maggie was a teacher at the Alley and recommended Bourque-Sheil when a playwriting education spot opened up. Not only did he have no interest in teaching, he also thought he wouldn’t be very good. But something about being at the Alley made it different and Bourque-Sheil recalled his own formative experience at the Stages theater camp. “That’s not teaching,” he explains. “That’s collaboration. And that’s how I’ve always tried to approach it. I’m not there to teach; I’m there to facilitate creativity.”

Bourque-Sheil never expected to love teaching; he only expected to tolerate it. Luckily, he has been proven wrong.

“I love getting to be a tourist in a bunch of different worlds. In a single day, I could end up teaching at a performing arts school in the morning, then a private school for kids with learning disabilities, then a school in a low income neighborhood, then a night class with veterans. It usually turns into field research for my own writing down the line. I also love the challenge of having to quickly connect with people who are pretty different from me. That was never something I thought I was any good at, but that’s sort of every writer’s job, so I’m grateful for the practice.”

Teaching has made Bourque-Sheil a little easier on himself as a writer too. He asks himself what Teacher-Brendan would say to his students, or if Teacher-Brendan would be so hard on Student-Brendan, and most often the answer is no. Writer-Brendan is always trying to reach what he calls a “flow state” in which he isn’t aware of how much time has passed. It is not character-driven or task-driven and the writing just happens. When this flow state is sputtering or when self discipline is running thin, he heads out to write in some public space, the only drawback of which, he says, is that people look at you funny when you talk aloud to yourself while trying to work out bits and pieces.

Teaching at the Alley lead to teaching playwriting and creative writing at HSPVA and to meeting David Rainey, an Alley Theatre company member and Artistic Director of Landing Theatre Company. Rainey approached Bourque-Sheil about writing for their Micro Theatre Program. This series facilitates new plays meant to be performed in small, non-traditional venues. For this series Brendan wrote Between Two Caves (Fall 2018) and Uncharted (February 2019). Between Two Caves takes place in the modern era of podcasting and investigative journalism and deals with moral dilemmas, conspiracy theories, and friendship. Uncharted is about a woman who discovers her father was a sperm donor when her previously unknown half sister shows up at her door. Both dark comedies deftly deal with timeless topics in contemporary settings that Bourque-Sheil navigates deftly and relatably. He will write one more play for the Micro Theatre Program in the Spring/Summer 2020.

Bourque-Sheil currently serves as Landing Theater’s Playwright in Residence and Literary Associate, for which he solicits play submissions from Houston writers and produces staged readings for their Landing Local Developmental Reading Series.

Bourque-Sheil’s two lives as writer and teacher are so intertwined they could not exist without each other. They are constantly feeding into each other, reflecting off, and coexisting with. It is clear how much writing, and teaching, mean to Bourque-Sheil, but in typical artist fashion, he undervalues himself and his process. “I don’t love anything I write at first; I have to see someone else love it first.”