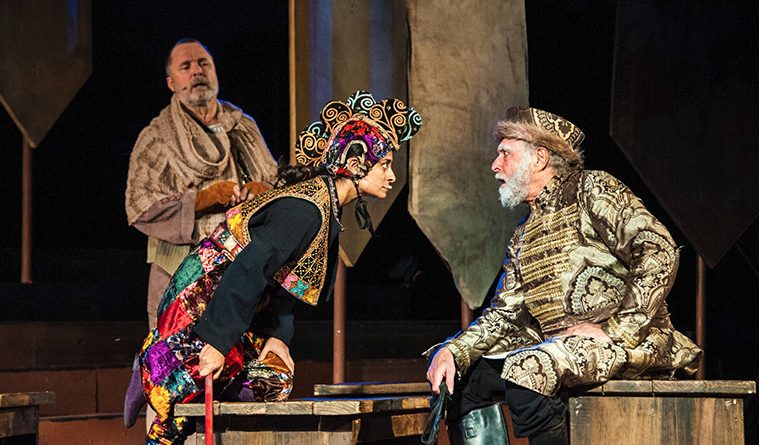 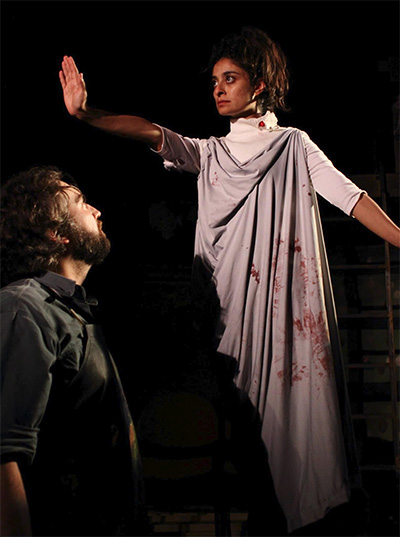 Maryam O. Baig (Statue called Clio) and Brian Wick in the workshop premiere of ON THE EVE at the Magnolia Lounge. Photo by Jeffrey Schmidt.

How Maryam Obaidullah Baig came to be an interdisciplinary performance artist in North Texas can be traced back to one action: she stood in a line.

Baig was born and raised in Karachi, Pakistan, where she earned degrees in political science and English literature and dreamed of becoming a human rights lawyer. She entered into marriage at age 20, and then followed her husband to America a few weeks later when he secured a job in Texas. The marriage quickly crumbled, but while Baig was waiting out the divorce proceedings she decided to visit the library at the University of Texas at Dallas.

“I thought, ‘I can delay watching my marriage fall apart for another hour,’” she jokes, “and I joined a long line in front of UTD’s library. I remember thinking, ‘Americans like to read, that’s awesome!’ but it turned out I was in line for the next semester’s registration.”

A volunteer directed Baig to the director of admissions, and she was given a course catalog to look at which, thankfully, “put the ‘A for art’ classes” at the front.

“I was picking out classes like I was at a Popsicle stand,” she says. “It’s a good thing I ended up getting a scholarship.”

After earning her bachelor’s in art and performance, Baig continued her scholarship studies at UTD with an MFA in arts and technology, concentrating on short video and animation. The merging of the disciplines thrilled her, because in Pakistan it’s not uncommon for traditionally left and right-brain approaches to blend. Here in America though, she was an outlier in that she refused to stick to only one discipline during the creation of her work. At her final bachelor’s showcase, for example, she had to have four supervising professors instead of the usual one.

“I truly wanted to merge art and tech during my time at UTD and use as many threads of expression in my work as possible, because I never think of myself as just a visual artist, or just an actress, or just a playwright,” she says. “I just want to tell stories.”

Baig’s time in Dallas has indeed been spent telling stories. She was part of the creation and performance of On The Eve, the time-traveling rock musical that began as a tiny production in Fair Park and went on to garner national attention and a New York showcase. She is a founding member of The Drama Club, an acclaimed and experimental troupe of DFW artists that focuses on new, ensemble-driven work. And she recently saw her play Jo Chaho Tum produced as part of Bishop Arts Theatre Center’s Down For #TheCount short play festival, a platform for female voices in American theater.

Jo Chaho Tum, which translates to “whatever you want” in Urdu, premiered in a 2016 collection at The Drama Club titled Wild, Wicked, Wyrd: Fairytale Time. An exotic fairytale about the dimensions and breadth of love, it uses shadow work and puppetry to tell a fantastical story about a forbidden attraction. 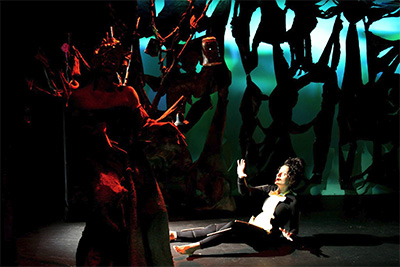 “The tools that I picked up at UTD have allowed me to translate my old identity as a Pakistani into my new identity as a Texan,” says Baig. “This 18th century poem [Masnavi Sihr Ul Bayaan, by Urdu poet and writer Mir Hasan] had been bugging me since I was a kid, and I decided to tell the other side of the story. When Bishop Arts contacted me and asked if they could pick up the piece, I was thrilled.”

Baig’s title comes from a song by pop musician Nusrat Hussain, which she acknowledges is her turn as a good Pakistani.

“I bought that album and used to listen to it as a 15 year old,” she admits. “Jo Chaho Tum was supposed to be a tentative title, but now its double meaning makes too much sense to change.”

As Baig explores the artistic possibilities of DFW, she’s struck both by how much art already exists in the city, and how much work still has yet to be done. Micro grants and the availability of affordable performance spaces are two sensitive subjects — and she’s not alone in her frustration regarding those subjects — as is the continual drain of talent to other bigger, better funded cities.

“A lot of our creative capital is leaving, and you can argue that it’s their nature as artists to evolve and seek out new opportunities,” says Baig. “But how can we make this a place where people actually come for cultural tourism? I regularly use public transportation and every day I’m meeting new people and running into tourists. They all ask what we do here and I have to respond, “what don’t we do here?” At each stop, there are so many choices. Every weekend I could go see a million things — see a different play every night, visit a different gallery every day — and yet there’s still more. I want everyone to see more, too.”