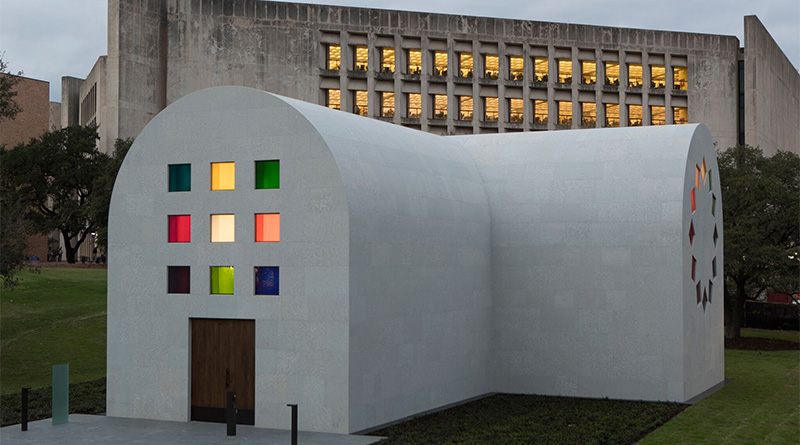 #10:  Ellsworth Kelly’s Austin at The  Blanton

AUSTIN—Austin offers a rare immersive experience into Ellsworth Kelly’s modern aesthetic, combining all of his explorations in line, form and color. The 2,715-square-foot building — a double-barrel-vaulted structure — is now a crowning piece of the Blanton Museum of Art’s permanent collection. Carter Foster, now the Blanton’s deputy director and curator of prints and drawings, penned the first art historical essay on Kelly’s building in 2010, tracing out its inspirations before it became Austin. Foster organized Form Into Spirit, a companion exhibit that is a sweeping overview of the artistic development of Austin. The building’s first models and designs are joined by rarely seen early Kelly paintings and drawings. Foster also included sections that illuminate how Austin is the embodiment of the motifs with which Kelly worked. “Ellsworth was more perceptual than he was theoretical,” said Foster. “He wasn’t theorizing color or shape or form, he observed from nature.” 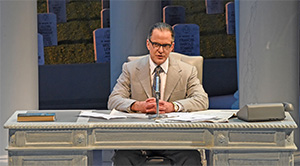 DALLAS—After a run at the Alley Theatre, Robert Schenkkan’s The Great Society heads to the Dallas Theater Center, March 9-April 1. Led by former DTC acting company member Brandon Potter as LBJ and Houston’s Shawn Hamilton as Rev. Martin Luther King, Jr., the blended company is once again under the direction of DTC’s artistic director Kevin Moriarty. A follow up to Schenkkan’s All the Way, The Great Society chronicles Lyndon Baines Johnson’s dramatic decline in popularity during his second term in office from 1964-1968 as he tries to to pass an astonishing amount of legislation. 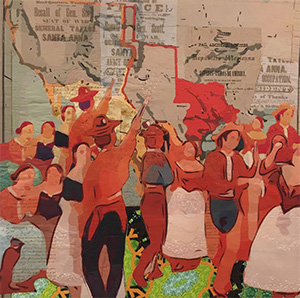 SAN ANTONIO—The sweeping Common Currents exhibition is on view across six institutions on various dates through May 7. The most ingenious part of Common Currents is how the participants were selected: by each other. To get the ball rolling, Artpace, Carver Community Art Center, the Mexican Cultural Institute, Blue Star Contemporary, the Guadalupe Cultural Arts Center and the Southwest School of Art picked two “anchor artists” apiece. Those artists then each picked two others who picked two others and so forth, creating an exponential spiral. “It was just one of those big, audacious ‘let’s try this’ things,” says Mark Williams, communications director at the Southwest School of Art, where the concept was conceived. “There’s a certain amount of healthy discomfort to it. Our exhibitions are usually planned out months and years in advance, and they’re curated. A lot of the folks selected we don’t know. It’s kind of groundbreaking.” 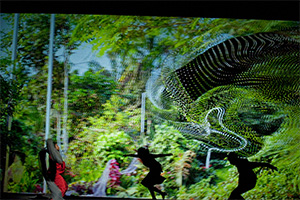 DALLAS— The Dallas Opera presents the US premiere of Dutch composer/filmmaker/director Michel van der Aa’s Sunken Garden, March 9-17 at Winspear Opera House. Film is fully integrated into every aspect of the opera. “Film in my work is never just added on later or used to enlarge things that are already there,” explains van der Aa . “It’s an autonomous part of storytelling, extending the music and showing different angles of the piece. When I composed Sunken Garden, I developed all three elements in parallel. For each moment in the opera I can determine which component is most important, so sometimes music takes the fore, and sometimes we’re watching film while music is taking a back seat.” 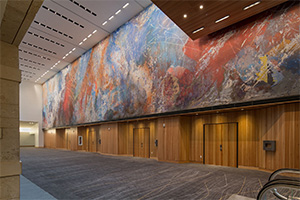 more about arts and culture in Austin on A+C TX 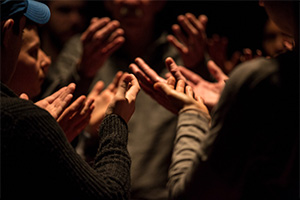 #5:  The Fever at Off Broadway on Flora

DALLAS— The standout for AT&T’s Off Broadway on Flora series is 600 Highwaymen (theater artists Abigail Browde and Michael Silverstone) and their mysterious creation, The Fever (March 27-April 1), which delves into the dramatic heart of human connections. The audience will not be separated into sections and rows, but instead will sit in chairs forming one large rectangle. “It’s about being a group of people, says David Denson, director of programming at the AT&T Performing Arts Center. “We love to talk about individuals, but at the end of day we actually organize as groups and help each other as groups. There’s a benefit to being groups and being connected to one another. The Fever is really about that connection.”

The Fever by 600 Highwaymen runs March 27-April at Wyly Theatre as part of AT&T Performing Arts Series Off Broadway on Flora. Photo by Maria Baranova. 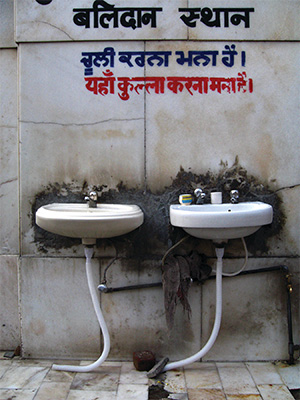 HOUSTON—Houston’s FotoFest reconvenes, March 10 through April 22, with its biennial exhibition and region-wide gallery focus on all things photographic. It opens to a different world than existed in 2016—a world even more steeped in the democratizing power of easily-accessible technology, but one whose politics seem to be contracting. INDIA: Contemporary Photographic and New Media Art is the theme of this year’s primary exhibition, a focus that narrows through geographic specificity rather than content. The show will feature only artists from India, and according to exhibition curator Sunil Gupta, will be “the largest presentation of contemporary photography by persons of Indian origin anywhere in the world.”

more about Fotofest on A+C TX 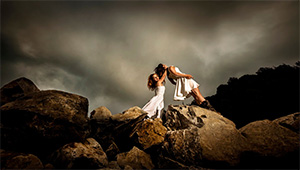 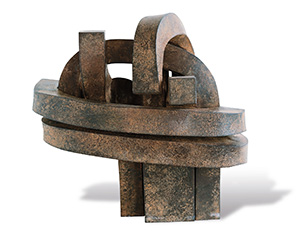 DALLAS —Two exhibitions dedicated to the life and works of the 20th-century Spanish Modernist sculptor Eduardo Chillida (1924-2002) are on view at the Meadows Museum through June 3. The largest of the two exhibitions, Memory, Mind, Matter: The Sculpture of Eduardo Chillida gives an overview of his sculptures as well as some works on paper. In this exhibition at the Meadows, we see the mature Chillida coming fully into his own, master of his craft at the height of his abilities and recognition, determined in his style and execution. The second complementary exhibition titled Chillida in Dallas, curated by Meadows/Mellon/Prado Curatorial Fellow Amanda W. Dotseth, focuses on De Musica, a large steel sculpture by Chillida commissioned for the opening of the Meyerson Symphony Center in 1989, which still stands in front of the Symphony building. Comprised of sketches and photographs of the project, the show gives a sense of the ties Dallas (and Texas) have had with this Spanish sculptor over the years. 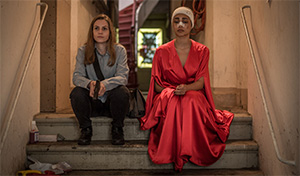 HOUSTON—The Evelyn Rubenstein Jewish Community Center of Houston presents the Houston Jewish Film Festival, celebrating 14 years of the best Jewish and Israeli Films, March 3-18 at the J, MFAH, Holocaust Museum Houston, MATCH and Axelrad Beer Garden. “This year’s Festival films span the human experience.” says Leah Gross, Chair, Houston Jewish Film Festival. “Opening night features an Israeli thriller about a female Mossad agent who protects a Lebanese informant, and the closing night selection is a poignant romantic comedy featuring actors on the autism spectrum. In between, is a documentary on the life of Itzhak Perlman—and we’re thrilled to announce that Maestro Perlman will be in attendance for a post screening Q&A.”

Shelter, directed by Eran Riklis, opens the Houston Jewish Film Festival on March 3 at the ERJCC. Photo by Eitan Riklis.