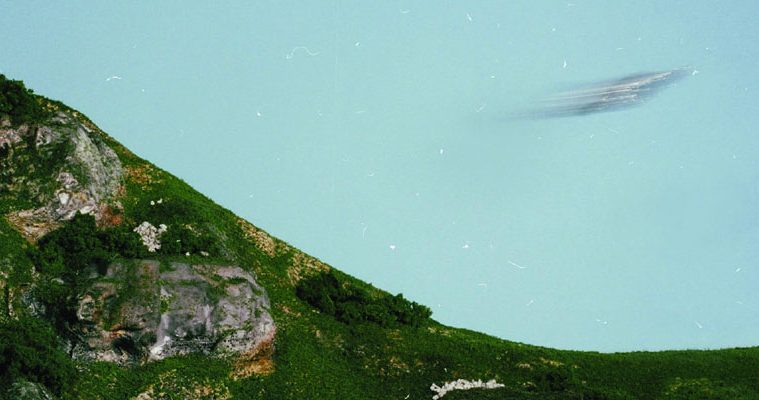 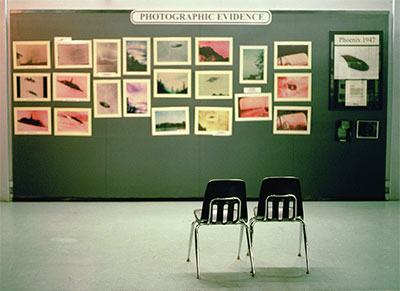 Rebecca Marino pushes gently against the deflating weather balloon that has taken up residence in a corner of her studio. The weather balloon sags in places and shakes dramatically with even the deftest of touches. She looks over at me and concedes with a laugh, “These are the things that keep me up at night.” Marino and I are at her pump project studio, which overlooks the main gallery, and acts as a crow’s nest for the space’s activities. Marino has overseen the pump project curation and studio management since late 2013; her studio bears the mark of a captain, overseeing her ship, which is to say the ceiling sags in places, there are various colors of wood that make up the floorboards, and the studio’s glass is frosted and cracked in places. Sculptures, gifts from artists, and acquisitions from Marino herself fill the studio’s nooks and crannies. And of course, there’s the ominously shrinking weather balloon, which seems to loom over us on this spring Saturday morning.

Marino and I are meeting to discuss her upcoming exhibition The Best Available Evidence, which opens at Austin’s grayDUCK gallery April 1 and runs through May 1. Stemming from a personal interest in space, Marino has taken the subject into a conceptual realm, dealing with the manipulation of images through photography and extending it to the experience of extraterrestrial life. The exhibition is, in part, informed by a trip to Roswell, New Mexico and a visit to the site of the Roswell UFO Museum. The museum’s mishmash of ephemera, including declassified testimonies from eyewitnesses, influenced a number of Marino’s pieces within the exhibition. For some of the photographs in The Best Available Evidence, a distinct cutout of the word “Proof” imprints the image. This marking was found in original print copies of old photographs and was used to hinder consumers from making off with a print without paying; however, in this context, the imposition of “proof” invokes a satirical notion of what constitutes reality.

Indeed, much of Marino’s work for this show plays against the notion that photography inherently carries a greater sense of reality than other artistic mediums. “The photographs are meant to play with the vulnerabilities of the medium and the idea of photography as reliable documentation. During the East Austin Studio Tour a woman looking at the series of photographs asked, ‘Where’s the UFO in this one? All of these other ones have UFOs in them, but this one doesn’t.’ I replied, ‘Well actually, there’s not a UFO in any of them.’” Marino gestures to a wall containing many of the prints that will find their way into The Best Available Evidence. The prints hint at a split second during a UFO encounter. A spacecraft whizzes across a field. Lights flash in an otherwise black void. These prints explore the malleability of photography but also thematically imbue the exhibition with a sense of disbelief. 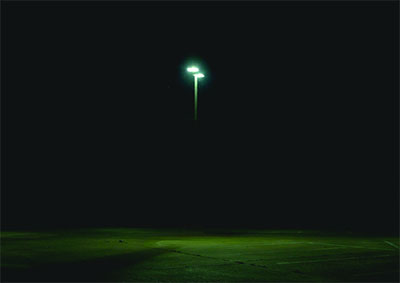 The exhibition also showcases a departure from a strictly photography-based study; Marino incorporates sculpture and performance work into The Best Available Evidence as well. Marino’s evolution beyond photography has been shifting progressively over the years. In a recent group exhibition hosted by the Austin Art Alliance, Marino included a new sculptural work based off of a series she completed around Anna Lee Fisher, a chemist known to history as the first mother in space. The piece, titled Mother’s Bed provides a visual interpretation of what astronauts sleep in while aboard the space station. This marked what feels like a natural progression for Marino, whose studio presence and curatorial work at pump project have undoubtedly influenced her capacity for medium exploration beyond the images she has shown in the past.

The Best Available Evidence’s sculptural components are still coming together during our studio visit (and do include a representative weather balloon) but Marino excitedly mentions the audio portion of the exhibition, which required her to reach out to voice actors through Craigslist (“I was posting ads in cities all over the place,” she states) to read testimonies from UFO eyewitnesses, some fabricated by Marino herself. The recorded audio will be available for audiences to listen to within the gallery setting but Marino will also have the cassette tapes available for purchase, in addition to a round of zines that she’s printing.

The exhibition’s reach feels extremely ambitious, and Marino is conscious of the many moving parts that comprise The Best Available Evidence. And between Marino’s many obligations, like her role as curator and gallery director, as writer and editor of the Austin-based publication Conflict of Interest, and her occasional stints teaching at The Contemporary’s Laguna Gloria art school, her personal art has been hard to prioritize. But no more; Marino is all in for this exhibition and it shows. For fans of space, this is an exhibition that allows for a niche interest to be explored. For fans of Marino, The Best Available Evidence stands to be a cohesive, distinctive look into the visual components of alien encounters that embraces the foibles of photography through smartly varied media.