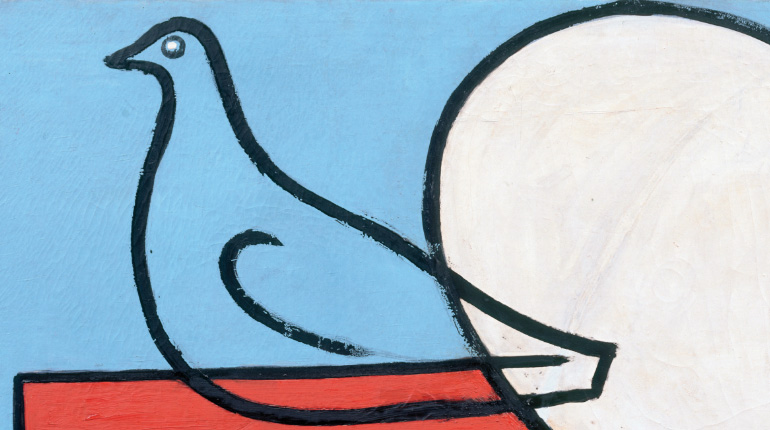 Events in real time are fluid, dynamic, and spontaneous. Some philosophers call this quality “lived,” as in “the mouths of the crowd fell slack-jawed by the lived event of Jane streaking in the altogether across the lawn of First Methodist.” In like but less bawdy terms, history is a matter of real things unfolding in lived, real time. Historians come along to make sense of a motley and changeful reality, domesticating the proverbial savageness of Jane’s bouncing breasts. So is created the binary logic of time divided into an inside and outside: history’s bell jar, where the seemingly seminal events go inside, lodged for posterity, and its ash heap, outside, where land many of time’s most interesting objects and stories.

The story of American Vanguards: Graham, Davis, Gorky, de Kooning, and Their Circle, 1927-1942, an exhibition at the Amon Carter June 9 through August 19, 2012, is one that ended somewhere outside the glass display case of official art history. Curated by William C. Agee, Irving Sandler, and Karen Wilkin and organized by the Addison Gallery of American Art, the exhibition recalls a time in art that was in-between in several ways. Looming large is the universal history of war. The artwork of these vanguards coalesces in and around the activities of the interwar period. Similar to the New Objectivity painting of the German interwar period, this body of American painting bears an allegiance to the figure qualified by its site-specific modernism. Notably not confronting the corruption and bizzarerie of the Weimar Republic in Berlin or Munich, these artists were in New York City, coupling their interests in Surrealist abstraction and Picasso’s rising classicism with the bright signage of Times Square and the Bebop jazz of Harlem. Further reinforcing its uniqueness, this is not part of the seemingly inevitable rise of pure abstraction or what Greenberg would later describe in terms of “pure opticality.” These paintings bear the fruits of steady hands delineating clean lines and identifiable forms from everyday life, like the large white egg and outline of a pigeon in John Graham’s “Table Top Still Life with Bird” (1929), or as in the fanciful and cartoonish cactus, phonograph, and conch in “Composition” (1930) by Jan Matulka, Graham’s painting teacher.  Neither non-objective nor Regionalist or Social Realist, all known quantities of the art world c. 1930, the paintings of American Vanguards constitute a jaunty, hep, and kinetic modernism all of its very own.

The exhibition promises a rethinking of modern American painting as it unfolded in the 1930s around a specific coterie of artists in New York City.  Explaining the singularity of the show’s particular temporal framing, Agee writes in the introduction to the catalog, “The 1930s was not a backward-looking decade. These artists were progressive, extending what had come before into new and personal visions, in the way that the best art has always done.” Echoing Agee’s sentiment, Shirley Reece-Hughes, assistant curator of paintings and sculpture at the Amon Carter, says, the original curators of the show “reveal the momentum of the early American modernist movement did continue into the era of the Great Depression thanks in large part to the visionary of Graham, who forged vital friendships with Davis, Gorky, de Kooning, along with many others, particularly David Smith, who is well represented in the exhibition.”

A central player if not the ringleader of the artists in the exhibition, painter, writer and curator Graham was born Ivan Dombrowski in 1886 in Kiev and came to the United States in 1920 after serving in the czarist cavalry and being imprisoned by Bolsheviks. After a two-year stint painting in Paris in the late 1920s, Graham returned to New York and quickly fell in with the painters Stuart Davis and Arshile Gorky and the three were referred to as “The Three Musketeers.” Their work as painters proved syncretic, each absorbing and translating influences of the others. Then came the Dutch painter, Willem de Kooning, who joined the group as the “fourth musketeer,” according to Irving Sandler. Painter de Kooning’s words from the time period tell of the singular energy of the moment: “There was a terrific amount of activity going on in the thirties. It was not a dead period. You don’t have to like the art to appreciate the excitement.”

While ultimately forecasting the bold figureless paintings of Abstract Expressionism, the artists in this show reveal an avant-gardism of the figure that emerged in the 1930s. Far from a matter of photographic realism, the objects in these paintings blur, crinkle, bubble, and fuse with a distorted three dimensional space represented within the two dimensions of a given canvas. Under the sway of Picasso’s classicism of the 1920s, Graham manipulated the figures of, the egg (once again), a plate, and a mug in “Two Eggs” (1928) and “Coffee Cup” (1928) creating a series of paintings about what’s literally in the cupboard and, as though Cezanne painted the contents of his kitchen, their fundamental essence as geometric forms. As with his “Seated Figure (Classic Male)” (1940), that is not in the show, De Kooning’s “Seated Woman” (1940) is classicizing in the hefty roundedness of the figure. More girl than woman, a female figure sits with a bow atop her pate. Her cream-colored arms detached from her body give her a presence that is at once robotic, ghost-like and oozing, akin to figure in a Francis Bacon painting.

Adding Jackson Pollock and Lee Krasner to a circle of artists that already included David Smith, Gorky, Davis, and de Kooning, Graham was, for a short time, at the center of a vast sea of invention and talent. In 1942, the year the story of American Vanguards finishes, Graham curated an exhibition at the McMillan Gallery in New York of work by Picasso, Matisse, Braque, Derain, De Chirico, Bonnard, Modigliani, Davis, de Kooning, Krasner, Pollock and others.  Notably Pollock’s first show, the exhibition was not so much a watershed for the next incarnation of modernism but a lightening bolt before the storm. Teaming with the electricity of modernism pluralized, the exhibition, though forgotten, is seminal to the history of modernism because it brought together standing figures of the European avant-garde with rising young artists of the American avant-garde to come.

A similar electricity pops along the horizon of the Amon Carter for the exhibition American Vanguards. Rebels of new form-making more than anything else, with the exception of Stuart Davis who was known for his political commitments, the artists of American Vanguards tell a history of the feral exciting space of modernism somewhere in between — neither inside the bell jar nor on the heap of ashes.