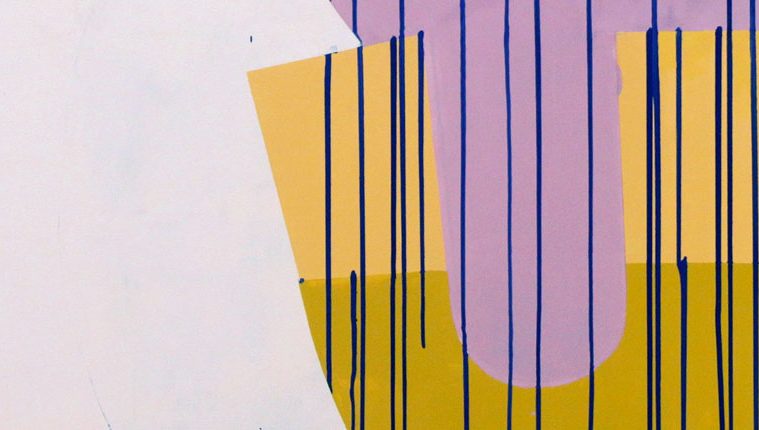 The Queen of Conflation

The seductive, curious paintings of Houston-based artist Marcelyn McNeil leave no room to doubt her commitment to a studio-based practice. Just ask painter Howard Sherman, a friend who often swaps studio visits with McNeil and who recently included her in his Houston Arts Alliance Artist’s Picks exhibition at Alliance Gallery.

“She has a wonderful way of making dry, matte surfaces feel sexy,” says Sherman, who also praises McNeil’s “mastery of color and unusual marriage of intuition and specificity.”

So it might come as a surprise that this painter’s painter, whose first Anya Tish Gallery solo exhibition, Lemonworld, is on view through May 25, cites a 1990s encounter with Gabriel Orozco, a poster-boy of “post-studio” art, as pivotal to her development.

“I remember being taken aback by how art and life were a seamless exchange for Orozco and how as an artist he had no need to be tethered to the studio or be consumed by the production of objects,” McNeil says. “Pieces like Breath on a Piano (1993) and Until You Find Another Yellow Schwalbe (1995) are still alive in my imagination as something to aspire to.”

Those Orozco photographs, which document transient moments such as the quickly disappearing fog produced by an exhale on a polished surface or represent the ephemeral emotional bonds that material possessions can generate between people who own the same cars, might seem worlds away from McNeil’s canvases. But perhaps similar impulses flicker beneath her painted surfaces — which, like Orozco’s works, tickle the imagination without alienating the intellect.

“I am interested in conflation,” she says. “It’s important to me that the space and forms I develop seem both flat and sculptural, that the paint be controlled and incidental, that the shapes feel somehow familiar and verge on being beautiful but are really quite awkward.”

McNeil describes her painting process simply: She develops the shapes and grounds simultaneously, taping off sections and either pouring or troweling paint onto the surface, making intuitive aesthetic decisions along the way. According to Sherman, it is these decisions that (thankfully) prevent her work from sitting too comfortably in one art-historical category or another, for example geometric abstraction, figure painting or Abstract Expressionism.

Her interest in conflation is apparent in places where — while not intended for literal interpretation —human attributes and references to strong personas, utilitarian objects, and architecture edge their way into her work. For example, in the exhibition’s namesake, someone (I’m not naming any names) might see a pink cow udder dangling in a yellow ladle; in Nowhere, a greyish grid stretches across a nameless rocky terrain; and Brawling Bodies shows a black arm starting to squeeze a kicking blue figure.

As one block of color makes room for the next, the result is a coherent composition of flattened, abstracted, silhouetted shapes rather than rendered or definitively translated forms. However, this is not to say that the compositions lack expanse or that they “fall flat.” McNeil creates depth of field through distinct hues and color relationships, the borders and angles of one shape distending or jutting up against another.

McNeil says a “serious curiosity” for life — travel, education, residing in different cities — is what influences her artwork the most. For the Kansas-born artist, Houston first came onto her radar after she got burned out on living in Chicago and heard a friend who had been a Core Fellow sing the Bayou City’s praises.

One visit to our top-ranked locale and she was hooked, citing Houston’s relatively low cost of living —  plus more freedom and time to focus on her work — as some of the biggest perks of having made the move.

For the past six years, McNeil has been showing in and around town in places such as Conduit Gallery and Darke Gallery (where she had her first Houston solo show) and, coming up this summer, the Galveston Art Center.  In 2011, she was awarded a Milton and Sally Avery Fellowship at the MacDowell Colony in Peterborough, New Hampshire.

As for the title of her Anya Tish show, McNeil says she wanted a title as open to interpretation as her paintings.

“For me the word ‘lemonworld’ is illustrative, playful and somewhat visually evocative,” she says. “I especially like that it may be interpreted in different ways, perhaps darkly or with levity.”