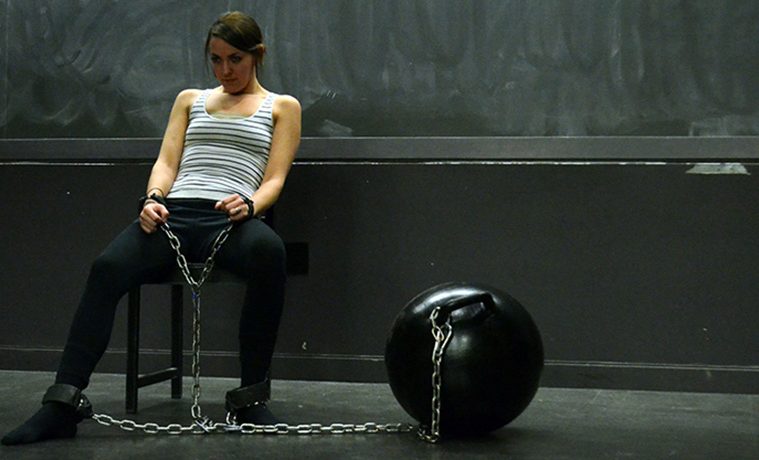 The Wedding, or the Rebellion (A cabaret of misogyny)

IMAGE ABOVE: Lee Corkran as Mariella in Becca Plunkett’s The Wedding, or the Rebellion (A cabaret of misogyny).  Photo by Samuel Allen. 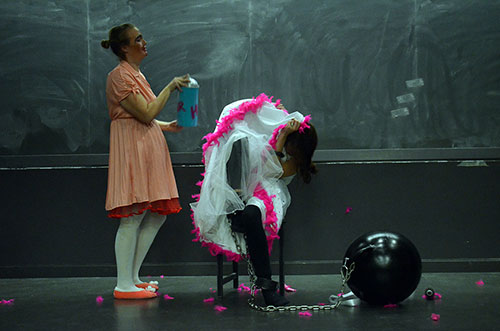 Lindsey Sikes as Caroline and Lee Corkran as Mariella The Wedding, or the Rebellion (A cabaret of misogyny).  Photo by Samuel Allen.

I recommend taking a seat at one of the tables situated in front of the audience. There is a bucket with endless mimosas and free flowing breakfast tacos. The slight imbibement will weaken your natural aversion to the grotesque subject matter and lull you into the rhythm of Becca Plunket’s The Wedding, or the Rebellion (A cabaret of misogyny), performed as part of FronteraFest’s Long Fringe series. The play tells the story of Mariella, “a pussy gopher struggling against the forces of her overbearing mother,” Caroline, the botox-addicted mother, Todd, “a non-smoking balding orthodontist,” and Pastor Frank, “also a non-smoker…[who] enjoys parties and such.”

The first third of the play features Mariella chained to a large lead weight, forced to listen to the endless barrage of her mother’s insults. Lindsey Greer Sykes, who plays the botox-addled mother, deserves applause for her inhuman ability to speak continuously for thirty minutes. Amid the torrent, we learn that this is the tenth marriage that she has arranged for her tortured daughter this week. All previous attempts at matrimony ended miserably, but she hopes this one will be successful so that she can subject Mariella to a substance abuse intervention and subsequent dental reconstructive surgery.

On the subject of dental reconstructive surgery, which grows increasingly erotic each time its mentioned, Leslie Turner’s costume design is nightmare inducing, down to the teeth. (I flossed multiple times after leaving the theater.) Todd, played by the wondrous Zac Carr, wears a poorly attached false nose which, coupled with his black and brown teeth, cast him as a coke-nosed Cyrano living off sugarless Haribo gummy bears and sardines. Kent Harral took time away from his role as Austin’s preeminent Segway tour guide to don Ralf Bakshi-esque hobbit ears and a pompadour. Harral’s performance is electric, his voice carries like a used car salesman announcing a minor league baseball game. 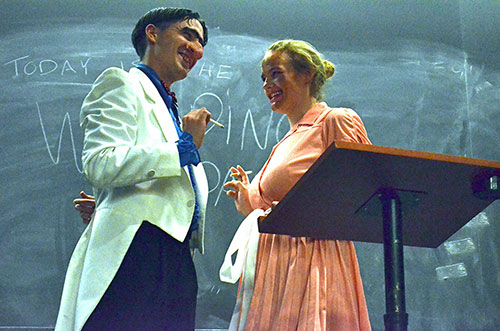 Zac Carr as Todd and Lindsey Sikes as Caroline in The Wedding, or the Rebellion (A cabaret of misogyny).
Photo by Samuel Allen.

Furthermore, applause, snaps, and jazz hands to the mouths of the whole cast for successfully traversing the verbal labyrinth that is the true star of the show, Plunket’s penchant for alliteration. Most if not all of the alliterations are inventive new euphemisms for sexual organs or lesbianism. Pastor Frank’s wedding vow monologue contains a minimum 14 Plunketisms that will soon enter the vernacular of degenerate youths around the country. Says Frank, “Do you, Todd, take this fuck-foosh-lip-lap-suck-muck-munch-vuncherto to be your lawfully wedded wife, and do you promise before this witness to vakjoop her, to rarook her; to haboong and shashoong her in sickness and in health?” Every character, save Mariella, speaks in these repetitive alliterations that set a hypnotic rhythm.

Throughout the work, Mariella appears to be at war with the language around her. Her mother, potential spouse, and pastor are constantly redefining her as a “garbly gash geographer,” “a fishy fubb farmer,” or “a wookie wrestler.” Other than planning future interventions and dental reconstructive surgeries, they occupy themselves with continually recasting Mariella the monster. It seems fitting that Mariella’s rebellion, sewing her mouth shut and clubbing the groom with her lead weight, is fearsome and monstrous. She enters the discourse by embodying the terms set by its tyrannical moderators. Grab a table up front, close enough to see Carr’s teeth, and keep drinking champagne until the image no longer haunts you.