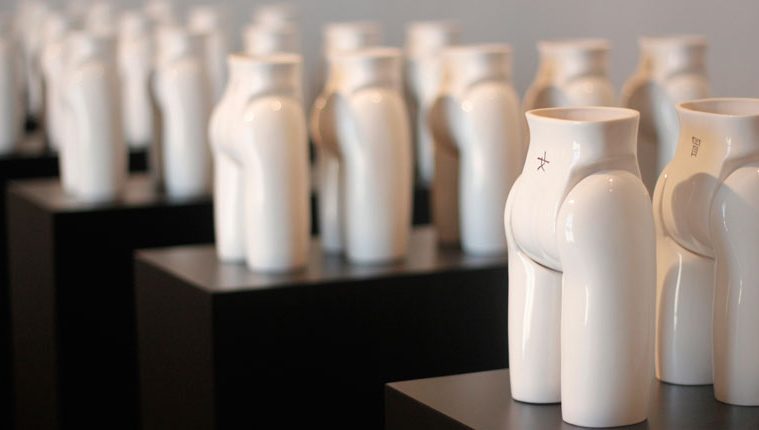 Galleri Urbane’s current show, order Allie Pohl’s Ideal Woman, mind is more than meets the eye. Upon first glance it struck me as a show so entrenched in our current vacuous culture that I was tempted to dismiss it. I was wrong. I met Pohl and struck up a conversation that made it quite clear that she gives off both heat and light while illuminating a landscape I sometimes find mind-numbingly dull. For instance, she takes aim via her art at a Barbie doll-driven mindset as well as the ubiquitous iPhone photographs that populate Facebook like mushrooms on a cloudy day in Portland. How? She took the latter to task by photographing her own underwear in swanky Beverly Hills bathrooms. The former – Barbie dolls – are scrutinized by turning them into neon dopplegangers for what contemporary women are supposed to be. It was an exercise in cultural commentary that was illuminating ­ and, obviously, the artist is a terrific person to turn to with questions.

A+C: Was there a specific “epiphany” that led you to embark upon the Ideal Woman project –or did it emerge gradually?

ALLIE POHL: I have always been interested in why we follow certain cultural trends. For example, the concept of body hair and hair removal – we remove hair from certain parts of our body and add it to other areas. As a way to respond to this cultural phenomenon, I created a series of sculptures based upon Barbie (the doll), as a metaphor for the “ideal woman,” and had Chia grow out of areas where our society removes unwanted hair: the armpit, pubic area and leg. The sculptures depict the transformation from pre-pubescence to womanhood. I was captivated by the shape of the midsection and started to explore different ways to appropriate the shape and what it really represented.

A+C: Can you articulate with specificity your “Barbie as Metaphor” idea?

AP:  Barbie, an American cultural icon, born in 1959 at the dawn of the Post-War consumer culture, was intended as a toy for young girls, but its ubiquitous presence resulted in a brand representing the idea of female physical perfection. By developing a new brand image or avatar, the “Ideal Woman” forces the viewer to be aware of the unattainable nature of this “cookie cutter” form that pervades Western culture.

A+C: How did the idea for the “underwear photographs” come about? During our conversation they seemed to be riffs on our overly documented lives via Facebook, etc. Is there more to it?

AP: I feel like I live in the bathroom! I always seem to have to go. Recently, I have been thinking about rituals that we do everyday, but that we don’t necessarily consciously think about. Hot Seat gives the viewer a glimpse into one of a woman’s most personal acts while still humanizing it. These photographs are taken in the trendy locations of Los Angeles, places people go to see and be seen. I am “over documenting” the experience.

A+C: Tell us how your interest in Marshall McLuhan influenced your work.

AP: I just LOVE Marshall McLuhan! His book, The Media is the Message, was my favorite read in grad school (probably because of all the pictures!). My MFA is in electronic media art and McLuhan is one of the leading prophets of the electronic age. All of my work conveys a concept or a message – just as McLuhan prophesied art would do.

A+C: Where is the line to be drawn with respect to femininity? After all, you wear makeup and do many “girlie” things that are conventionally seen as, well, conventional. As an artist, are you in and of the “pack” but also out of it?

AP: I don’t believe there is a line to be drawn for femininity or masculinity. I think everyone should do what they feel is comfortable for them – whether that’s wearing a lot of makeup or no makeup at all. As I have gotten older, I have enjoyed embracing my “femininity.” I see every day as “playing dress up.” It is very important to me for my work to be relatable, which involves some knowledge of “the pack.” But I also have the ability to observe from outside the pack.

A+C: Do different forms of art emerge as you move to different parts of the U.S.? Are you making different things in California than you did in New York? Is genius loci part of the process?

AP: I think your surroundings do affect you to some degree, but I think it is more about the message I want to convey at the time and the best way to execute that. Naturally, your environment and what you see affects the message you want to convey – so genius loci is a part of the process.

If the artist’s job is to articulate the terrain in which we live and move, Pohl does an excellent job of doing exactly that with regard to societal norms regarding femininity. It’s odd to see women as pared-down, two-dimensional objects. However, isn’t that precisely what “trophy” wives and girlfriends are? While there could be deep and compelling arguments for the depth of beauty and the concomitant ramifications of Hellenic gorgeousness, Pohl gives us plenty to ponder. And I, for one, was guilty of leaping to judgment far too quickly.

Allie Pohl: Ideal Women on view through May 11, 2013 at Galleri Urbane, Dallas.