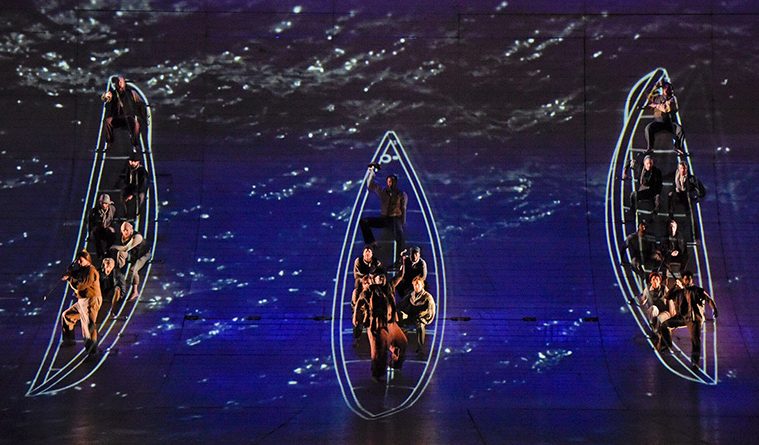 Victory at Sea: Moby-Dick at The Dallas Opera

The Dallas Opera production of Moby-Dick, an opera in two acts with music by Jake Heggie and libretto by Gene Scheer.
Photos by Karen Almond, courtesy of The Dallas Opera. 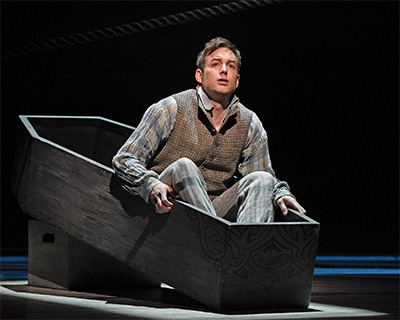 “Melville put the whole universe into Moby-Dick,” my companion said before the curtain rose on The Dallas Opera production of Moby-Dick.   It’s also true that composer Jake Heggie and librettist Gene Scheer put the universe of Melville’s masterpiece into their opera, which returned to its birthplace at AT&T Performing Arts Center’s Winspear Opera House on Nov. 4, 2016.

Heggie’s score, rich with cinematic tension and oceanic turbulence, conjures the gravitas of this epic tale in every way. Balancing melody and sheer orchestral color, Heggie, Scheer and their creative team have crafted an opera that mines the visual and theatrical potency in Melville’s words. Scheer’s clever condensing of Melville’s tome into something manageable for a three-hour theatrical event, with over half of the text coming directly from the book, is a wonder of editing. He directly hones in on the book’s central dilemma, the human propensity to blindly pursue a dangerously misguided idea, and in that process take others down with them. Such is Captain Ahab’s crazed pursuit, which is laid bare in such a way we feel the full force of such a position and its dire consequences.

But there’s more to this novel/opera transformation. What is left out of the libretto is made up in the sheer scale and quality of the theater put on stage, starting with Robert Brill’s vivid set design of towering masts and tangled rigging, all of which lends a feeling of complexity, turbulence and impending doom. Elaine J. McCarthy’s projections are used to terrific effect, and thankfully with restraint. The opening sequence where the universe transforms from a series of constellations into the bow of the mighty Pequod is one breathtaking way to pull the audience into Melville’s world. We only get one glimpse of the white whale’s ominous eye, looking directly at the audience. It’s all that we need. Gavan Swift’s lighting design put us into the heart of the storm and it’s eerily still aftermath, while Jane Greenwood’s costumes add a period flavor.

Perhaps the most striking scene happens near the end, where the crew has their final confrontation with Moby-Dick. We witness we the full catastrophe of Ahab’s demonic obsession, as one by one the crew slips into the ocean, tumbling out of their surreal projected whaling boats in to the watery abyss.

The performances were equally as impressive. Jay Hunter Morris, a Texas native, dominated the stage as the monomaniacal Captain Ahab. Stephen Costello returned to the role as Greenhorn (the Ishmael of the opera) with a highly nuanced performance. He captures that existential loneliness when he as the sole survivor of the Pequod finally whispers the novel’s iconic opening words, “Call Me Ishmael” from Queequeg’s coffin. South African bass baritone Musa Ngqungwana delivers a soulful performance as Queequeq. Morgan Smith’s robust power was in full form as Starbuck, who does all that he can to talk sense to Ahab. Having a lyric soprano voice proved another strike of genius, as Jacqueline Echols lends vocal texture as Pip. The all-male chorus, led by Alexander Rom, added depth and drama. Emmanuel Villaume also seemed at home in Heggie’s riveting score. Leonard Foglia’s original directing re-staged by Keturah Stickann made Moby-Dick’s second sail into Dallas nothing short of a stunning success.