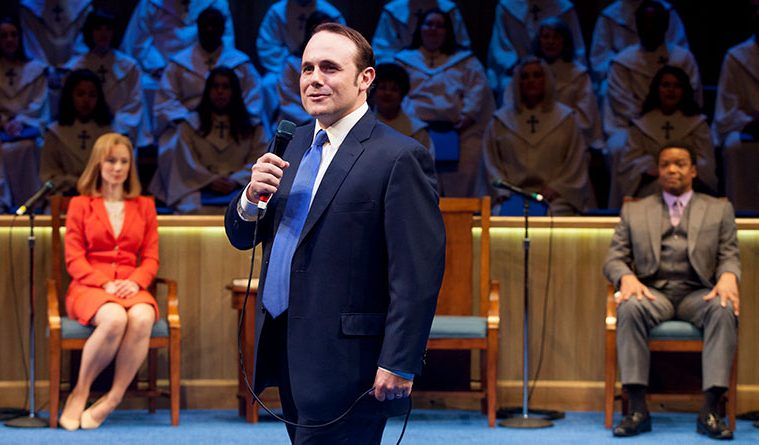 Wrestling on the Blue Carpet: Nancy and Tarra on The Christians at the Alley 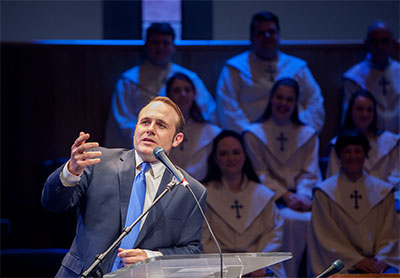 Richard Thieriot as Pastor Paul in the Alley Theatre’s
production of The Christians.

Arts + Culture editor Nancy Wozny and Houston theater writer Tarra Gaines take a break from the usual review format to discuss Lucas Hnath’s The Christians, running at the Alley Theatre through May 15.  Hnath’s play chronicles the events that unfold after a megachurch pastor’s controversial epiphany. Here is an excerpt of their e-chat.

Nancy Wozny: Sister Tarra, ten minutes into The Christians I was reminded of your story on the increasing role of the audience and thought, “I have been recruited again! I am in this play. As the congregation. Of a megachurch of all things!”

Tarra Gaines: Praise be, Sister Nancy. I thought something similar especially inside the newly renovated Hubbard Theater. The house and stage configuration certainly accentuate the similarities between a theater and a megachurch, though I don’t know that Pastor Paul’s (Richard Thieriot) church is all that conducive to congregation participation any more than the Alley is to audience interaction. I have to confess there were some times during The Christians when I felt devoid of the Spirit.

NW: So are you saying that the guy in my row wasn’t leaving to join associate pastor Joshua’s new church? As for the Spirit, this is megachurch, not a Pentecostal tent meeting! The whole point of megachurches is that they look like the ballroom of a Marriott Hotel. Pastor Paul wears a suit. Where are the holy garments? The incense? The genuflecting? The theatrics? How does one discuss fire and brimstone around such normalcy? 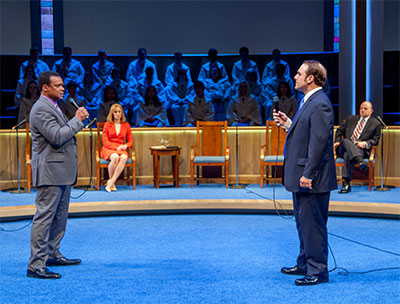 TG: Well, my sister in theater, that seems to be Pastor Paul’s dilemma isn’t it? He’s getting out of the fire and brimstone business and no longer believes in hell. Unfortunately, the God as merciful redeemer for everyone (even Hitler) message doesn’t sell as well as hell does. And Pastor Paul’s church, though newly debt free, still needs full collection plates. The play addresses a very ancient question, one older than Christianity: How do we live in a world when bad things happen to good people? But perhaps from some perspectives the more important question is: How do we live in a world where good things happen to bad people? Hell is a pretty nifty answer to that question. I get that Hnath wants Pastor Paul and his congregation to figuratively get down on that blue carpeted floor and wrestle with the issue, but I have trouble suspending my disbelief that they all think they’re the first to do that wrestling.

NW: Well now, dear one…many, thousands, do their wrestling on those blue carpets. But are you saying this issue has already been tackled by all the great theologians already? I was raised Catholic with a Latin Mass, and so not exactly sure how it all played out. But we have this wonderful waiting room called purgatory. I’m sure it too has a blue carpet. I don’t think this is a play about the existence of hell. It’s about losing your flock.

TG: The issue has been wrestled with for thousands of years, and I love a good theological wrestling match. I just don’t think The Christian has many new moves.

NW: I don’t think of megachurchs as places of movement. But what about the flock question?

TG: I do think this is a play about losing one’s flock, but the reason for the loss is important and goes back to this question of hell or no hell.

NG: Just reminding myself that we are discussing religion in an arts magazine. A first for me. Carry on. 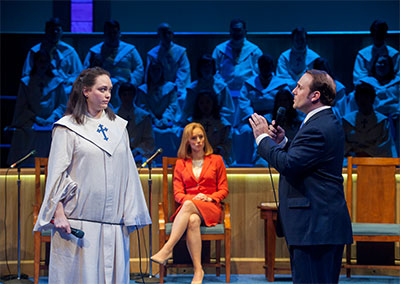 Melissa Pritchett as Jenny, Emily Trask as Elizabeth,
the Pastor’s Wife and Richard Thieriot as
Pastor Paul in Alley Theatre’s production of
The Christians.

TG: Pastor Paul’s faith in an absence of hell is a faith the rest of his congregation don’t have, even though Associate Pastor Joshua, played with power yet sympathy by Shawn Hamilton, wishes he could have such faith, even as he leads the revolt.

NW: Is it OK to take a break from hell to discuss Hamilton, who amazed us both in The Whipping Man and Stupid Fucking Bird at Stages, and as MLK in All the Way at the Alley? He had such a great moment in the story about his mom.

TG: At this point, the most shocking thing I could see on a Houston stage is a mediocre performance from Shawn Hamilton. He’s always good, and in this role he brings great nuance to the character even early in the play when liberal Episcopalian me is rooting for Pastor Paul in the Paul/Joshua Bible verse throw down scene.

NW: Oh I love that scene. Nothing sexier than a man who knows his verses.

TG: Do you think Alley newcomer, Richard Thieriot as Paul, holds his own in the role? For me, he definitely mastered that concerned-preacher cadence.

NW: Well lapsed atheist me, the girl who walked into a gift shop in Jerusalem’s Holy City asking for a “Rosemary,” thinks Thieriot totally captured that nice guy, normal guy, kind of funny, almost handsome, slightly charming, but not overly so, feel good Megapreacher. Like Joel Osteen, he had one of those sly smiles. But that’s the tragedy. Charisma doesn’t trump hell. And Emily Trask was terrific as the attractive, well behaved Pastor’s wife. Of course, I loved Jeffrey Bean as the clueless elder too. But in the end, we would have both followed Pastor Joshua to the Y, leaving Pastor Paul in an empty room, which winds me back to the core of theater and religion. I felt the tension of that pairing.

TG: Can we pause for a moment, Sister Nancy, and contemplate those microphone cord dances throughout the play?

NW: Did someone say dance? Why, of course. 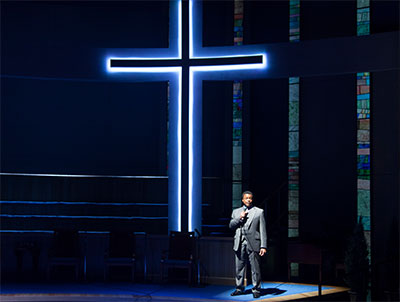 Shawn Hamilton as Associate Pastor Joshua
in Alley Theatre’s production of
The Christians.

TG: Perhaps Hnath giving everyone a mike in their hand so that they’re always either performing or sermonizing, especially during private conversations, helps to build that theater and religion tension. Director Gregory Boyd’s little choreographed moments of characters jumping over and tangling up the cords even further emphasizes their conflicts.

NW: I never thought about that. That’s an excellent observation. I just thought the church spent their bucks on the building and couldn’t spring for wireless mikes. Still, I get the feeling that the microphone dance was not enough for you.

TG: I appreciate those touches, but I also couldn’t get past the 70’s game show gloss of this aspect of the production. I felt like any minute an audience member was going to be asked to come on down for a chance to win an all inclusive vacation to heaven or, better yet, a new dinette set.

NW: Oh, you fancy Episcopalians (or as we like to say, “Catholic Lite”), with your cathedrals and Bach cantatas! Megachurchs are supposed to feel like going to church in a bank or an insurance convention. Set designer James Youmans got that spot on as did Kevin Rigdon in his industrial, unholy lighting. Seems like we are wrestling on a blue carpet of our own making in discussing this play.

TG: Which brings us ever back to theater and religion. In replicating the megachurch experience, have Hnath and Boyd given us all the drama of that insurance convention or have they elevated Paul’s loss of flock to a tragedy worthy of Dionysus (or one’s theater god of choice)? Personally, The Christians didn’t quite convert me.

NW: It would have if the audience had been swept up into the action, slowly leaving throughout the play, until the very end, when Pastor Paul would be alone in his megachurch. But for now, this mass is ended. Go in peace. See you at the next service, I mean play.