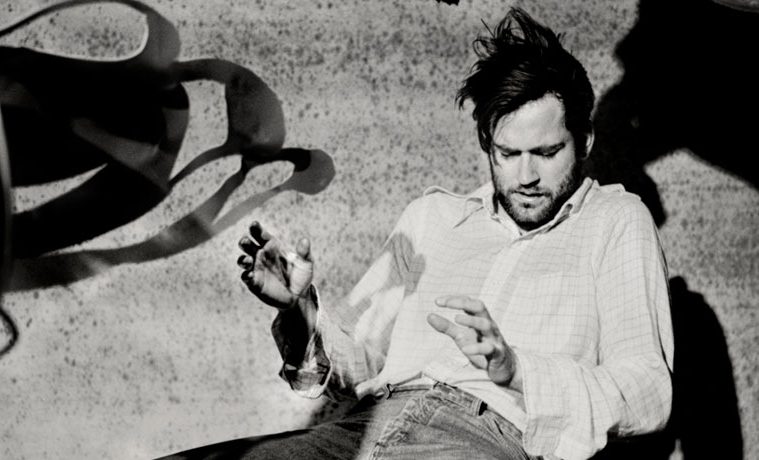 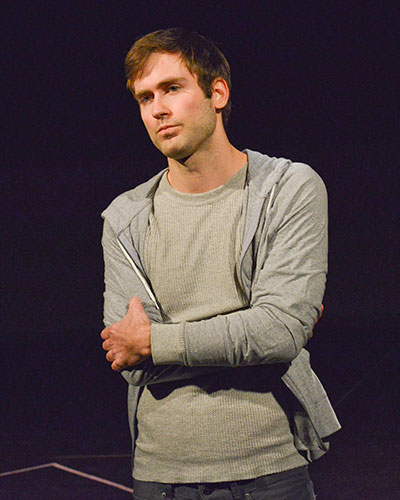 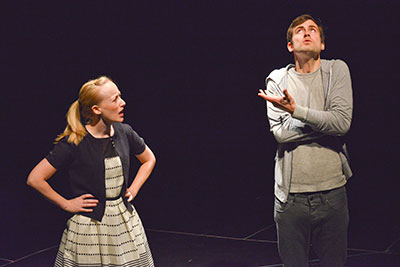 Arts + Culture TX:  Bartlett’s Cock at Second Thought Theatre is getting rave reviews. What’s hard/fun/weird about playing a gay guy who falls for a lady?

Justin Locklear: COCK is definitely an intense, verbal cage match. I have found the shape of the play most interesting. While the title and premise raise interest and attention from an audience, I admire how Bartlett shifts the focus from a bizarre love triangle to posing the question “What is this guy really fighting for?” Identity? Happiness? Control? While this seems like fairly standard play material, finding motivation, what I find hard/fun/weird about this role is that I never really reveal the answer to the questions. The writing demands a distance from resolution in the final moments. It leaves audiences brimming with their own theories and reactions, which, for me, is very satisfying. 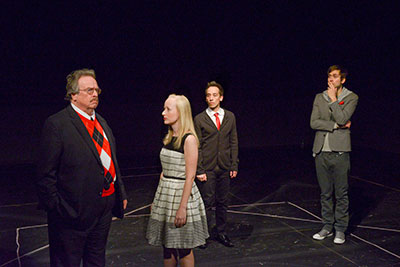 A + C:  I do love it when the audience has to carry some of the load. How do you see this role as a stretch for your skills, or maybe it’s exactly up the alley of your talents.

JL: I suppose the stretch for me is working on a show with so little to hide behind. I have grown more accustomed to avant-garde, immersive shows, and while these types of projects are both quite intimate, they feature many moving parts and scenic elements, which are absent in COCK. It is simply bodies in a space, telling a story, one scene at a time. I suppose, in method, it is most similar to workshop performances at Baylor University. A black box. Limited seating. Limited set. Focus and urgency. Perhaps, that’s why it feels so electric, I properly prepared for the role without knowing it. 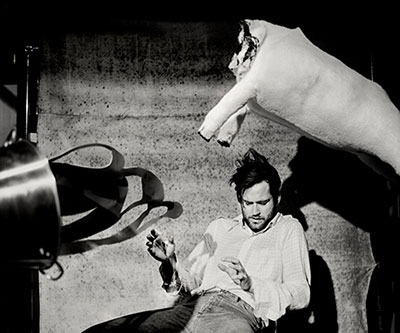 A + C: When you attended Baylor, was it your plan to stay in Texas? Get us from college to Dallas in your career.

JL: At the end of school, the idea was to jump at opportunities and to see where they would lead. I had heard great things about the theater work in Dallas, but I was wary of the overall feel of the city. Growing up in Atlanta, GA, I knew how it felt to live in a creative city. I wasn’t sure what Dallas had to offer, but I knew I wanted to get my feet wet as soon as I could manage. I got a job with Dallas Shakespeare and started exploring. I’m now almost five years into my life here, and I haven’t noticed any reasons for stopping. 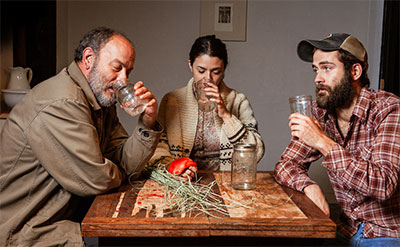 A + C:  Hopeful news there. You have a history with the Ochre House Theater, which will be new to our non-Dallas readers. What have you done there that you are proud of and what’s cooking there now?

JL: The Ochre House is an industrious small theater in the deepest of Deep Ellum, priding itself in churning out compelling, original works. The founder and creative director, Matthew Posey, has written some of the most effective plays I have ever performed, if not read. His core group of artists are tight-knit, dynamic, and raw. My definition of The Ochre House is biased, but I have heard that we’re not dreadfully bad. 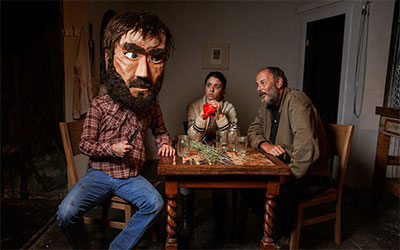 A + C: “Not dreadfully bad” coming from an actor is reason to celebrate.

JL: We have received frequent recognition from Dallas critics for our work, and we were even named Best Theater in Dallas in 2012. This past year, I helped produce and perform Dreams of Slaughtered Sheep, a surreal Appalachian story of two men working at a slaughterhouse. The story documented the decay of a worker’s mind from the soul-crushing work of the slaughter. It was an opportunity to design some unique puppets and perform in an archaic back-woods Shakespeare tongue. The next show in our season will very likely be announced in March. I wouldn’t dare spoil the surprise. If nothing else, it will be like nothing else. 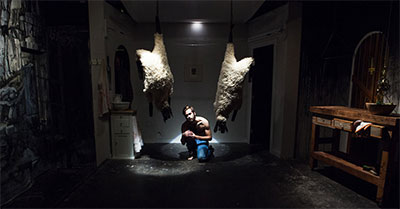 From Dreams of Slaughtered Sheep.
Photo by Karlo x. Ramos.

A + C: I wish you could fess up, especially considering my weakness for surreal Appalachian drama. Since you have been connected to Ochre House and Dead White Zombies, would you say that your inclinations lean toward the experimental?

JL: Absolutely. I am always intrigued by artists whose instincts lead them in directions that I can never predict. I like working with artists from different backgrounds and lines of study. As long as you share a sense of trust and bravery, experimental performance can be quite transformative.

A + C: I see from your list of best of accolades, your work has not gone unnoticed. How has Dallas been a good place for you to become noticed? 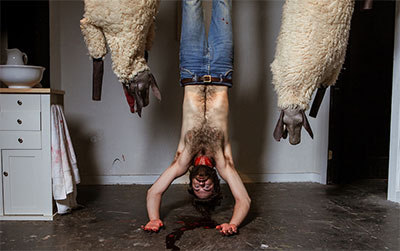 From Dreams of Slaughtered Sheep.
Photo by Karlo x. Ramos.

A + C:  Never underestimate the power of bullshit confidence. Entire cities run on it. But, seriously, where has the city fallen short in supporting actors?

JL: No city is perfect for theater in 2014. The only thing that I feel Dallas has to overcome is spending too much time worrying about what it needs to overcome. Dallas is gonna be huge. All we have to do is say is how huge.

A + C: Judging from the sheer amount of activity I keep track of in Dallas, you could very well be correct. Any advice to a newbie Dallas actor?

JL: Dallas (read: the world) rewards excitement. Artists in Dallas work hard, they work often, and they work well with others. This generates excitement. Dallas has been in an artistic push these last few years, especially in theater – Jump in! 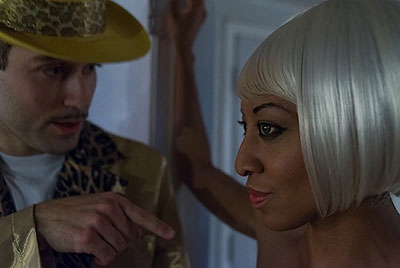 A + C: You mentioned that you think Dallas needs a theater district apart from the Downtown Arts District. That was a while ago, any progress?

JL: I will always endorse the idea that Dallas could use an area to explore for theater artists looking for inspiring work, Dallasites looking for engaging theater, and tourists looking for the Dallas experience. Notwithstanding the obvious central location of our arts district downtown, perhaps what Dallas lacks in a nucleus we gain in a personal experience. Wanna go to uptown for happy hour? Why not visit Kitchen Dog, Theatre Three, Uptown Players, or Second Thought Theatre? Feeling like hitting up Deep Ellum for a local brew? Head down to Undermain, The Ochre House, or the Margo Jones! Yes, I could easily go on, but I haven’t filled up on gas, and I don’t get paid until next week. The point is, in Dallas, hell, Texas, things are spread out, and that’s an overwhelmingly good thing. 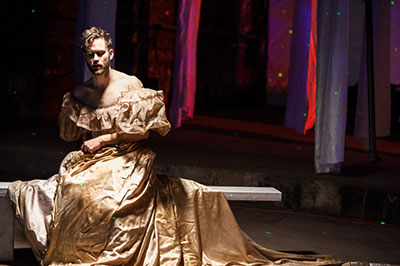 A + C:  You may be the first person who admits the upside of  sprawl. It’s certainly working for you. As soon as COCK is over, you head right into Dirty Filthy Diamonds, which you are co-creating with your partner, Danielle Georgiou. How did you get sucked into the dance world, and specially the dance installation world?

JL: I will never quit from attempting things that lay on the boundary of my experience and/or ability. I want to learn and better myself. Danielle’s dance work has become this perfect avenue for the application of a lot of my various passions: conceptual art, costume design, live music. Her work is always very inspiring and infuriating to me. 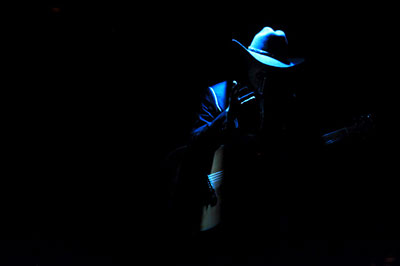 A + C: Danielle is a force to be reckoned with.

JL: I love her aesthetic and her drive, but I hate the fact that she has this wealth of knowledge and experience of dance that I don’t possess. So, through collaboration and patience, we have found ways to create work and inspire ourselves to new projects that neither of us have been able to make on our own. Working with Danielle on Dirty Filthy Diamonds has been such a joy. DGDG is such motivated group, and the designers coming together on this project are outstanding. I think it’s gonna get weird.

A + C:  I’m counting on that. Is it true that you once made a prostitute puppet? I read that. Defend yourself.

JL: I blame her parents.