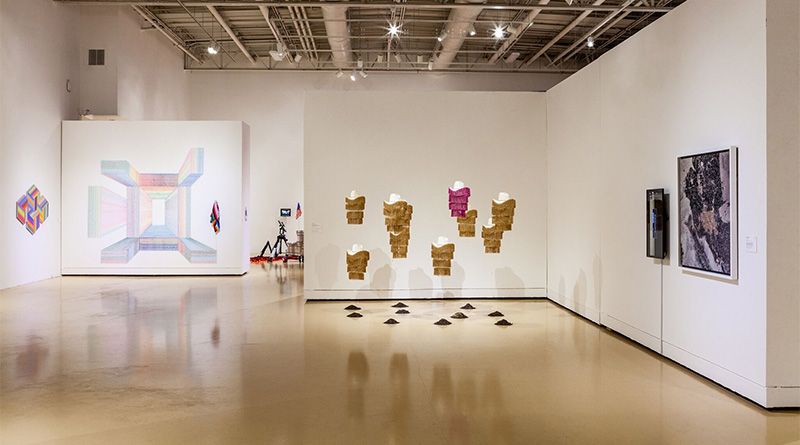 Extending nearly 2,000 miles from the state of Texas, through Southwestern New Mexico, along the southern edge of Arizona to California, and all the way to the Pacific Ocean, the border of the United States and Mexico is a massive, expansive region. It is a zone that is neither here nor there, but staunchly Mexican and North American at the same time. It is quite simply a complex, heterogeneous, place where nothing is simple at all.

Two institutions are celebrating 10 years of collaboration with the 5th edition of the Transborder Biennial, held in tandem at El Paso Museum of Art (EPMA) and Museo de Arte de Ciudad Juárez (MACJ). On view through Sept. 16, the Biennial is a dual-venue project extending two cities in both the United States and Mexico. The understated arc in this story is the physical act of crossing the border to experience both exhibitions.

According to curator Kate Green, “The exhibitions acknowledge the hope and lived reality of the border even simply within its structure, encouraging people to cross if they could but also recognizing that not everyone can.” Between the two exhibitions, visitors can see three works by each of the artists and collectives for a larger and more profound experience: EPMA hosted two works by each of the 32 artists and collaborative teams chosen with jurors Carlos Palacios and Gilbert Vicario from the open-call format, and MACJ hosted one work by each. Green elaborates to say that the Biennial is “both one large exhibition in two parts, and at the same time each exhibition is also very individual, speaking to the complexity of life on the border.”

Artist Ingrid Hernández of Tijuana recalls, “Everything in Tijuana is visible, everything is out in the open for everyone to see; here everything is mashed together in terms of class, race, poverty, etc. It’s all out there.” A photographer by trade, Hernández has spent years documenting the evolution of domestic spaces in Tijuana and beyond. For the Biennial she and her collaborative partner Pieter Wisse exhibited the second phase of a project they began in 2016 titled Nada que Declarar (Nothing to Declare). In each of the museum spaces they created a mural-sized print of images they collected via social media and from people who were waiting to cross the border. Of the 700 images they received, they chose 10 on which to intervene with text, then printed 500 copies of each image, placed them in manila envelopes, and redistributed them at the border crossing. The large scale mural is wheat pasted on the wall, and in order for it to be deinstalled, it must also be slowly and completely destroyed. The work, Cómo está la Línea/How’s the line? is “a commentary and play on advertising seen on the line. It has political commentary, and recalls the life span of advertising on the border as well,” states Hernández.

The work also makes reference to subtle but vast differences between the U.S./Mexico borders in California and Texas. Hernández and Wisse refer to the border as a “line.” While it seems insignificant, a bridge is an architectural method to connect two places, and a line is a demarcation of geography. From her perspective Hernández says, “It’s our limit of the country from the Mexican perspective; it’s a space that is both shared and not shared. This Biennial is also so important because it allows artists to share our different experiences, especially when there is so much hostility projected toward the border and specifically at Mexico and Mexicans in general.”

Artist Angel Cabrales recalls crossing the El Paso/Juarez border to visit MACJ exhibition, saying, “It was interesting for me to see how some of the artists were surprised that you have to cross a bridge to leave, then cross that bridge again to go back and forth from one side to the other.” Originally from El Paso, the border bridge is a constant presence in Cabrales’s life, and he acknowledges the depth of perspective the Biennial has brought to the area. “It was great to have so many people from the border, to talk to everybody, to share ideas and perspectives, and to see the ways in which the two cities were interacting with one another.”

Cabrales created two site-specific installations for both museums, each infused with his sense of wry humor while commenting on the hostility of migration. For example, at MACJ he converted grocery store coin-operated children’s rides into an ICE truck used to collect and then deport illegal border crossers. The work displaces a common image of Border Patrol agents arresting migrants and recontextualizes it in the context of a nostalgic ride for children, illuminating the normalized scenarios of border life in El Paso.

He also found the value in being surrounded by artists from so many border contexts and was able to learn from their shared language and experience, including a history of his own city that he had never been taught. Participating artist Andrea Blancas Beltran had been researching the history of the quarantine centers in El Paso that were built to decontaminate Mexican citizens as they crossed the border into the United States in the early 1900s. Titled b/order (r)evolution, Blancas Beltran’s visual investigation of collaged, archival photographs was insight into a story Cabrales had not known. “I had no idea, and I am from El Paso, but I also had no idea what racism really was until I left El Paso,” he says. “I had to learn about it by leaving and it was mind boggling to me. Being here with everyone, and being able to talk with Andrea, and learn from everyone’s voices, was really exciting.”

Artist Gilberto Rocha-Rochelli reinforces the same sentiment. “You know, as an artist you sometimes really question what you are doing and why, but being surrounded by people asking the same questions, and in the same frame of mind is inspiring, it gives you that extra breath of air when you need it,” he says. Hailing from Laredo, Rocha-Rochelli contributed four works to the biennial, of which his sculpture of a modified foosball table speaks to the bigger issues of protest in the current political climate and the imbalance of power structures between the populace and government forces.

In his game of foosball, the underdog will always be outweighed by the powers that be, and a win is impossible, no matter how equitable the game should be. This is clear along the border as well, where nothing is black and white. Rocha-Rochelli says, “Things become very blurry. Perceptions along the border are so different even between the two cities like Laredo/Nuevo Laredo. On one side you have more options than the other, and people take that for granted.”

On his time in El Paso for the Biennial, he speaks the sentiment of similarity rather than difference, “We are all creatives participating in the arts, so everyone is warm and welcoming. To watch people come together and cross the border, to cross countries, is a big thing. I’ve come back with more ideas and drive.”

Indeed, the Transborder Biennial is a reflection of life in this space of being in between, and finding both the complication and commonality for the participating artists. Hernández refers to a space in which “you either live in it or give life to it,” she says. “Everyone has a particular experience and reflecting on it in an exhibition like this one offers a moment to share and posture these different perspectives, experiences, and personalities, and that is important.”